Three weeks ago on the Westman Islands there was one day when Eyjafjallajökull’s ash fell so thick that everything outdoors was covered. Everything. But the Grapevine arrived in Heimaey on a sunny morning that belied the long stretch of ash fall the town had braved until just a few days earlier.

We could still observe the evidence—black ash in neatly swept piles along the town’s roadsides, a man mowing up a cloud from his lawn, smudged sheep, but today there was a whole day of adventure ahead of us, and the sky was clear.

On a morning boat tour of the archipelago with Simmi Einarsson, of Viking Tours, we saw no sign of the ash that would blow over the town later, forcing us to postpone our flight home, and even go to the police station to pick up plastic goggles and face masks.

Simmi sailed us out of the narrow mouth of the harbour past a boat digging out the new rock that had been deposited from the island’s eruption in 1973, out to the sea-carved cliffs of tuff and basalt that constitute the fifteen Westman Islands. Before lunch we had seen towering cliffs crowned with green grass and grazing sheep, and more birds than I’ve ever seen in my life—puffins, fulmars, kittiwakes, razorbills, and eider ducks. Oh, and a pod of four killer whales right beside the boat. “They know me,” Simmi said. No big deal.

Later, Unnur Ólafsdóttir started our car tour of the island with a little spranga, the traditional cliff rappelling the islanders use to gather birds’ eggs from the cliffs. ‘Cliff rappelling’ makes the experience sound more gadgety than it is. There’s no harness and no helmet, just one old rope with knots tied in it to make it easier to hold on. We practiced low on a cliff face that local kids frequent. One islander, José, demonstrated spranga for us with the elegance of a dancer, floating from one perch to another with ease. Alas, the Grapevine was not so graceful.

Further along the island tour, Unnur had stories for every point of interest we passed: the site of the first settler in Heimaey, the windiest point in Iceland, a newly formed mountain and the homes it destroyed, the scene of a pirate invasion. Then the ash began to roll in from the mainland, blanketing the island.

Since the mainland volcano, Eyjafjallajökull, had officially stopped a few days earlier, we thought we were in the clear. We were wrong. But the people of Vestmannaeyjar seemed impervious. Masked and begoggled tweens ran past us as we trudged, perhaps a little dramatically, around town, holding our coats to our faces. Perhaps it’s because the town knows it can survive the worst, as it did with the 1973 eruption of Eldfell. 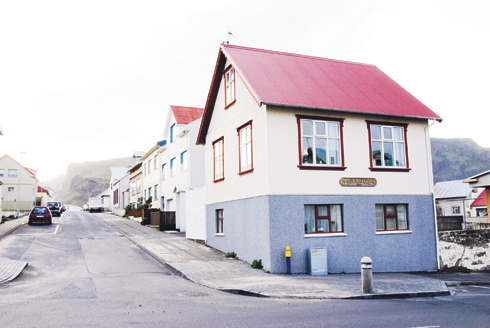 That eruption was a blessing and a curse, Unnur told us. The lava and ash covered 400 homes and other buildings, most of which will never be recovered.

But it was also a boon to the community, increasing the Heimaey’s size by 2.2 square kilometres and shielding the town and its harbour from the elements. After the eruption, the warm lava was even used to heat the town, and the pebbly ash worked well as building foundation. One of the airport runways is built over an old church and cemetery, filled in with ash, Unnur told us. The tourism hasn’t been hurt, either, by the eruption story, the new mountain, Eldfell, and the excavation of covered homes, cheesily called the “Pompeii of the north”. You can still see remains of some of the houses that were crushed by the lava flow.

Heimaey’s deluxe swimming pool, a gift from Norway to replace the one the eruption destroyed, is one of the less obvious benefits of Eldfell. I am not exaggerating when I say that the pool’s slide where you coast down a steep drop onto a trampoline is the best slide I’ve ever been on. The swimming pool is open until nine at night, so it was a perfect way to relax and rinse the volcanic dust from our ears at the end of the day. 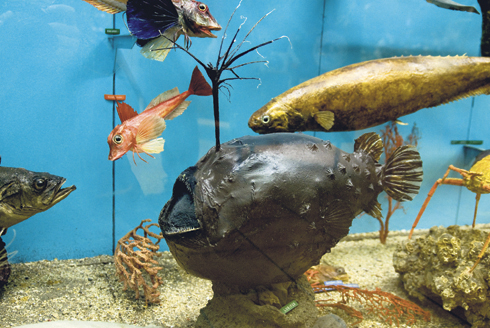 After the requisite swim, evenings in the summer are a great time to get a beer and walk around town. When the sun sets, the young people come out and drive around, ash or no. There seems to be a strong youth culture in Heimaey. Several young people told us that the kids here start drinking in their teens, usually at friends’ houses. It’s unusual for a teen over 16 not to drink. At the same time, we got a sense that Heimaey is a close community, and that people here look out for one another. The young people we spoke to were proud of their Vestmannaeyjar identity. Some leave the island for school and for a change, but many return.

Not just anyone is considered a local, however. You pretty much have to be born there. Maybe if you’re a foreigner who’s been there for 40 years you might be able to call yourself “from Heimaey,” one local told the Grapevine. “This has been a very closed society for generations,” Heimaey’s Mayor Elliði Vignisson explained. “We have to be independent for everything. It makes a very strong identity.” But from a tourist’s perspective, everyone is very friendly in Heimaey.

If you really want to get an understanding of what it’s like to live in the Westman Islands, ask a local about the fishing industry. Fishing is Heimaey’s bread and butter, a fact you won’t necessarily notice if you’re on a two-day vacation there taking boat tours and climbing volcanoes. Nevertheless, it employs a large proportion of islanders and shapes attitudes and daily life in Heimaey, as it has for centuries.

You can check out the product of the industry in the flesh at the Museum of Natural History—lumpfish, plaice, and the hideous wolffish, to name a few of the usual suspects. Get the cod in “Champagnesauce” at Café María, then head over to the aquarium to visit your meal’s more fortunate brethren. The museum is also crammed with beautiful rock and mineral specimens, and its taxidermy collection gave us a rare up-close encounter with local animals. 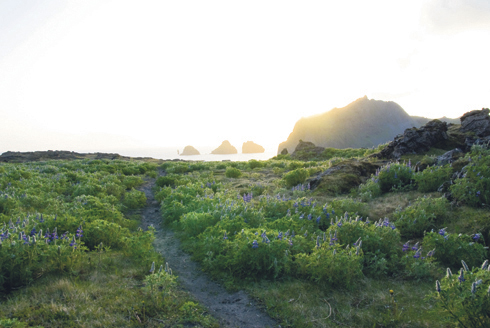 After we acquired the masks and goggles, we were ash invincible. Walking and hiking around Heimaey is like exploring a mini all-in-one Iceland: idyllic green hills dotted with sheep, black sand beaches and their striking flat volcanic rocks, lava fields, accessible paths to Helgafell and the newly erupted Eldfell with its sharp red scree. Much of the terrain around the town is lava, with paths winding through it and, when we were there, lupines.

Getting around the island is easy on foot, by bus, or by hitchhiking. We Grapevine ladies wanted to head to the uninhabited south to the bird lookout point, a large wooden box balancing on the side of a cliff overlooking the sea. We were picked up within seconds of putting out a thumb at around 9:30 at night on a Wednesday. Since it takes moments to drive anywhere on the island, locals are often more than happy to go a little out of their way to help you get there.

Thanks to Air Iceland for the flights, Gistiheimilið Hvíld for accommodations, and Viking Tours for their wonderful bus and boat tours. Book flight with Air Iceland Click Here