Rule number one when riding an Icelandic horse: do not use your leg. Or at least, do not use as much leg as you would when riding a horse English-style. Swinging myself onto the saddle on a dark, snowy January morning, I had not imagined that my day riding through snow-capped mountains and frozen rivers with one of Iceland’s top riding centres, Eldhestar, would begin with such an abrupt wake-up call.

You see, after spending the majority of my life trotting, dizzily round and round an English riding school, I have it drilled like a rusty nail into my subconscious to always, always, without fail, ‘use your lower leg!’ So, plonking myself down in the saddle, lo’ and behold: I used my lower leg. Of course I should have waited for my guide to explain that riding in Iceland is somewhat different than riding in England. Instead of hugging the horse’s sides with your lower legs, Icelanders commit one of British riding’s greatest faux pas: gripping the saddle with the knees, and having as little lower-leg contact as possible. Of course I didn’t listen. Instead, I let habit take its natural course and, after proceeding to use my lower leg, I found myself lurching forward at a god almighty speed, engaging in heated negotiations with my sparky four-legged friend and contemplating death-via-nose-dive into the oncoming snowdrift.

I should have known that riding in Iceland would be anything but ordinary. Forget fancy tweed jackets and delicate hairnets, dah-ling; riding in Iceland is all about rocking the fur-lined boiler suit, six pairs of socks and itchy thermal underwear look. Donning my rather fetching man-boots, I was ready to tackle Iceland’s extreme weather. It had snowed heavily all night, the winter sun was refusing to show up, and the wind was roaring at such speeds that I felt the need to apologise to my poor horse Margeir as he braced himself against the wind, with me sitting on top like a great sack of spuds. 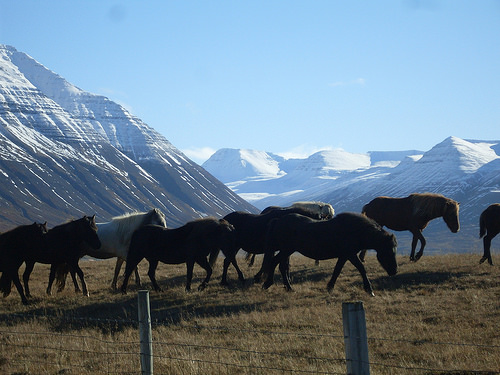 As we set off, away from the hustle and bustle of Reykjavík, I was amazed at how loud the silence was out here in the middle of nowhere; there were no buildings, no roads, no signs of life other than the towering mountains and snow-covered lava fields. The landscape was timeless. As we rode beneath Ingólfsfjall (the mountain named after Ingólfur, Iceland’s first settler in the late ninth-century), I felt like a Viking explorer in an Icelandic saga. Glancing down at my noble steed as he picked his way up the rocky mountain path and stumbled head first into a pile of snow (he was distracted by some fuzzy green stuff that looked suspiciously like grass), I decided that I rather liked this whole horse riding in Iceland malarkey, as did Margeir, my fearless horsey companion.

Horses have, after all, been important in Iceland since the very first days of settlement. The Icelandic horse today is virtually identical to those horses ridden by the heroes galloping across the pages of Norse sagas over 800 years ago. Even the horse’s attitude is badass. Take Margeir, for example. Halting at the top of a steep bank sloping down to a partially frozen, fast flowing river, Margeir contemplated the watery barrier in front of him. I would like to point out that a normal British horse would freak out at the prospect of tackling a half-frozen river (cue posh British accent): ‘Oh goodness, dear rider, you don’t expect me to cross that frightful monstrosity, do you? Absolutely not, I’ll get my tail wet,’ and then stubbornly refuse to move for the next five hours. Dear little Margeir, however, eyed up the situation and tiptoed quietly downwards to the river’s edge.

Testing the ice with his hoof by pawing at the river, Margeir proceeded to put some weight on the ice and see what happened; he fell through. He tried with his other hoof, and the same thing happened. Now, any British horse that I know would have had some sort of mild seizure by now, and be pining desperately for the comfort of their stable-rug and some nice, soft meadow hay and a dry martini. Margeir, however, decided that this was all rather dull, thank you very much. Happy that he wasn’t going to die an ice-related death, my noble stallion (well, gelding, actually) proceeded to wade through the water, quite unabashed by the blustery gale and strong undercurrent that was trying desperately to drag him downstream.

Reaching the other side, we continued to ride on into the mountains. Around midday, we stopped for a break beside the Ölufsá river. I looked at the other horses, heads bowed and bodies braced against the wind: the dazzling reds, bright browns and dark-as-night colours of each horse were different, a dramatic smattering of colours against the stark, white landscape. With such striking appearance, it is not difficult to see why the Icelandic horse has captured the Icelandic imagination for centuries.
In fact, our guide casually informed us of Iceland’s supernatural beastie, the terrifying Nykur. According to Iceland folk legend, the Nykur is a horse-like lake monster, with ears and hooves that point inwards. The Nykur will jump out of the river or lake and drag unwitting riders below the surface to a watery grave. Of course, I knew that I had nothing to fear with dear little Margeir, but I couldn’t help glancing at his ears as I backed away slowly from the river’s edge.

And A Good Ride Too

Luckily Margeir did not attempt to drown me, and I made it down the mountain to Eldhestar in one very stiff and frozen piece. Upon dismounting Margeir, I was amazed to discover that my legs had not turned to jelly. Usually, after riding for an hour in England, I can’t move and spend the rest of the day walking bow-legged. Yet six hours of hard riding and fast tölting, I didn’t ache in the slightest. Of course, up until recently the Icelandic horse was an important mode of transport, with Icelanders riding for days at a time to get to their destination, so riding had to be reasonably comfortable. So that’s why Icelandic horses don’t need much leg: it would be too bloody knackering. Instead of prancing around with ribbons in their mane, Icelanders rely on their horses being brave, honest and kindly in nature. Hell, there is even a beer named after them, Gæðingur (meaning “good horse”).

Icelandic horses clearly occupy an important space in Iceland’s mental and cultural landscape. Icelanders are proud of their horsey heritage, sending unwitting tourists off on riding tours all around the country and still enjoying boozey, horse-filled fun at the annual Laufskálarétt (autumn horse round-up) in September. In fact, Icelanders love their horses so much that they actually eat them. I tried to imagine nomming on Margeir between two slices of bread and a garnish of pickle, but couldn’t quite imagine him ever standing still enough.

Margeir, like the rest of the horses at Eldhestar, was a little fireball. The word Eldhestar actually means ‘fire’ or ‘volcano horses,’ and at first I was worried that Margeir was going to explode or spontaneously combust. As far as I am aware, this does not usually happen. Or perhaps I was just lucky. I prefer, however, to think of ‘volcano horses’ as referring to Icelandic horses’ sparky nature. My noble steed Margeir was a bundle of energy and, together, he and I had a whale of a time bombing through the snow, tölting across icy lava fields and beneath misty mountains. It was a match made in heaven, a perfect date; I even got a slobbery kiss at the end. 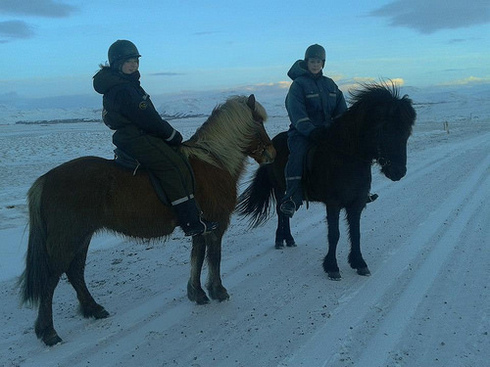