You are probably aware of the spectacular (if small) volcanic eruption on Fimmvörðuháls, the ridge next to Eyjafjallajökull glacier. We wrote about it last issue and everything. That eruption sadly ended not long after we went to print, and even most volcanologists generally believed it was over. But shortly after midnight on April 14th, everyone’s favourite Icelandic volcano showed us that not only had it not finished, but it was just warming up… 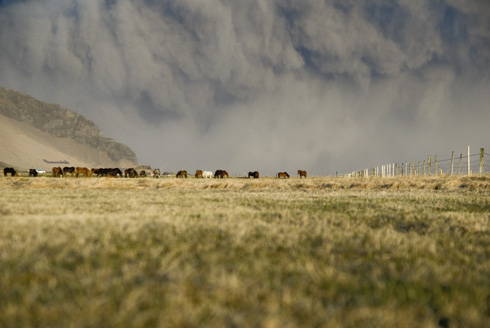 Technically it’s the same volcano, just a different eruption. What probably happened is that the pathway to the surface on Fimmvörðuháls blocked itself up, but the pressure beneath needed another way out—this time the weak point was somewhere around the summit caldera (crater) of the mountain. And so unlike the previous fire-fountaining flank eruption, this time we got lava coming up from a fissure near the top, under the Eyjafjallajökull glacier itself. 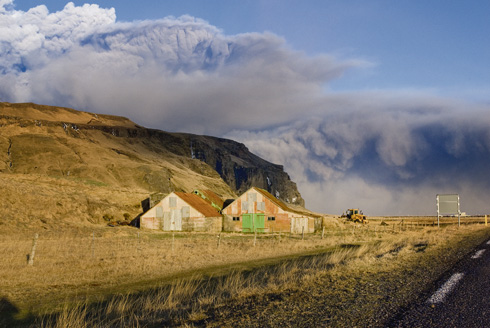 Fissure eruptions in open air, like Fimmvörðuháls, tend to produce lava fountains, lava flows and very little ash. Sub-glacial eruptions, on the other hand, are totally different beasts. This eruption began with what’s called ‘phreatomagmatic’ activity—water (in this case from the melting glacier) interacting with the hot magma near the surface. The result was a thick plume of mostly white steam, rising between 6 and 11 kilometres into the air. As the eruption progressed, the plume became much blacker as the glacier melted away it could scrub less ash from the eruption plume, so the ash content of the plume increased over time. By the first Saturday, when Grapevine took a trip out there, the plume was like a dark grey pillar looming over the mountain, being blown by winds and shearing sideways at the top (the so-called ‘umbrella’ region).

And all that ash had to come down somewhere. The heavier stuff rained down over the surrounding area, blanketing everything in a thick layer of fine grey powder. The air stank of sulphur, and a deathly silence prevailed. Farmers struggled to move livestock out of the ash fall area and some are now claiming they will never return. The lighter stuff caused problems on a much, much larger scale. Taken by high-altitude winds, the fine ash was blown all around the northern hemisphere in a matter of days. With fears of volcanic ash being sucked into jet engines, flights all over Europe and beyond were grounded. Air transport literally shut down for a week or more, leaving people stranded all over the world (including, ironically, students from my home university in the UK, who were on a Volcanology field course in Italy). And this will surely have a lasting effect on air travel. Investigations currently abound into whether or not the decision to ground air traffic was the right one. On a business and political level, this certainly isn’t over. 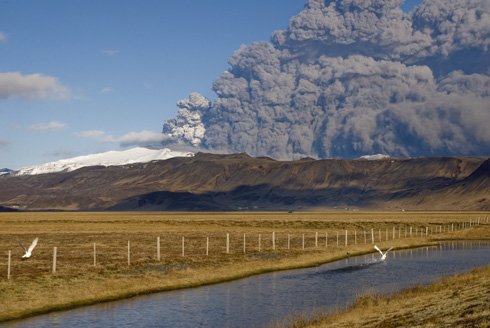 Aside from the ash cloud, this eruption carried one other major threat—one that we’d been fearing since day one: jökulhlaup. Jökulhlaup are glacial floods, a rush of water generated in this case by the heat of a volcanic eruption. Within 12 hours or so of the eruption beginning, the decision was made to break the ring road in order to let floodwaters pass through to the sea, hopefully without taking the expensive bridges with them. Shortly thereafter the floods began: torrents of dirty water, rocks and icebergs, flowing down from under Gígjökull glacier and washing south towards the sea. The scene was spectacular, if destructive, and repeated itself a number of times over the following days.

Luckily for many, after a week or so the eruption began to change. ‘Strombolian’ activity, which takes its name from the famous volcano in southern Italy and not the dish akin to a rolled pizza, began in earnest. The ash plume shrank down, and airspace finally began to re-open. Billowing ash and steam was largely replaced by small explosions casting lava bombs hundreds of meters into the air, accompanied by thunderous booming sounds. As I write this, the eruption continues and shows no signs of slowing down. We could be in for more of the same for months to come, perhaps with a lava flow emerging from beneath Gígjökull at some point. 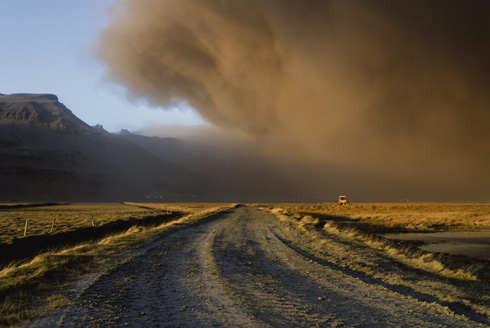 What about Katla, then?

And so, to the question seemingly on everyone’s mind—“What about Katla?” The answer, right now, is “Absolutely nothing”. There may be signs of a linkage between Eyjafjallajökull and Katla, but at the moment there are no signs of that linkage waking up. Maybe this will change in the future—who knows—but for now you can relax safe in the knowledge that the volcano everyone loves to hate (come on, give poor Katla a break!) is not about to blow up in our faces. Unless it does.

Icelandic Meteorological Office Issues Yellow Warning For Much Of East

A Crazy Microcosm On A Fjord: LungA Is Back And Better Than Ever