Progressives With Most Support

With just one month to go until the next parliamentary elections, the Progressive Party is polling ahead of the competition. Of those polled by Market and Media Research (MMR) between 22 and 25 March, 29.5% indicated that they would likely vote for the Progressives.
Coming in behind the Progressives are the Independence Party, with a presumed 24.4% of voters support. They are followed, in kind, by the Social Democratic Alliance (12.5%), Bright Future (12%), and the Left Green Movement (8.7%).
As with other MMR election polls, all respondents were asked “if an election were to be held today, which party would you vote for?” Those who were unsure are then asked “What party would most likely get your vote?” If still unsure respondents are then asked if they would vote for the Independence Party or any other party. If they select ‘any other party’ then their vote is divided amongst all parties except the Independence Party. 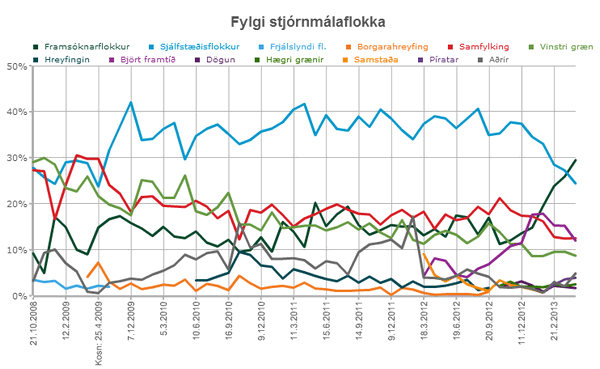