The Icelandic Confederation of Labour (ASÍ) has released their most recent grocery price survey and the long-term results are pretty depressing for anybody who depends on grocery stores for the procurement of food and beverages.
The most recent report released by ASÍ reflects on the rise in grocery prices from April 2008 through to March 2013, with the findings revealing that prices at Bónus and Samkaup-Strax have risen the most dramatically. As RÚV reports the cost of goods at these two stores has increased by 64% over the five-year period considered. Over the same period, the consumer price index has risen by 46%.
Kristjana Birgisdóttir, a price control manager for ASÍ, calls the dramatic increase in prices at Bónus and Samkaup-Strax to be unacceptable.
Nóatún has raised its prices the least since 2008, at 26%, keeping their increase below the increase in CPI. Hagkaup’s prices also increased less than the CPI, at 33%. 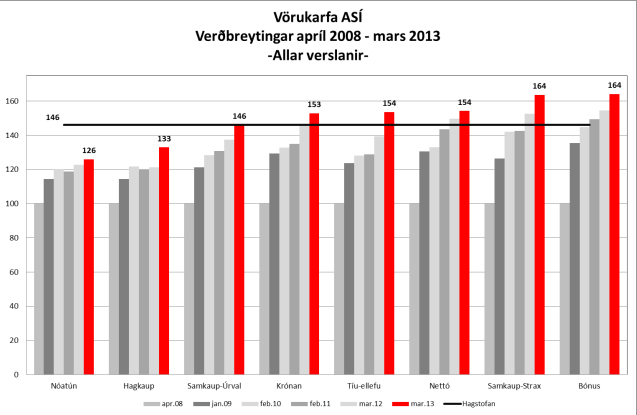 The full report (in Icelandic) can be read on ASÍ’s website. [PDF link]