On the birthdays of her husband John Lennon and their son Sean, Yoko Ono presented the fourth biennial LennonOno Grant for Peace to four activists whose work varies from chart-topping albums to New York Times best-selling novels.
Clad in a Jedi robe, Mayor Jón Gnarr, opened the October 9 ceremony at Harpa by detailing his personal commitment to gay rights, nuclear disarmament and various other social justice causes. He also mentioned Reykjavik’s “unique position as a city of peace,” and said the city is a leader in encouraging peaceful efforts worldwide. “Peace should not be the privilege, but the right of everyone,” Jón said.
Yoko, sporting her trademark circular glasses, bounced with excitement throughout the ceremony, and highlighted the diversity of award recipients: pop star Lady Gaga, Rachel Corrie, a young activist who was crushed by an Israeli bulldozer in 2003 while trying to protect the home of a Palestinian family from destruction; Christopher Hitchens, author and journalist best known for his numerous essays, novels and controversial views on politics and religion; John Perkins, author and journalist famous for his book Confessions of an Economic Hit Man; and Pussy Riot, who are currently in prison for protesting the Russian government and church. Pussy Riot received their award earlier this year at a special ceremony in New York.
“The world is getting extremely tense, and when I look around I see that there are so many incredible, courageous activists,” Yoko said. “This celebration honours these brilliant activists, whose work encompasses so many different things.” 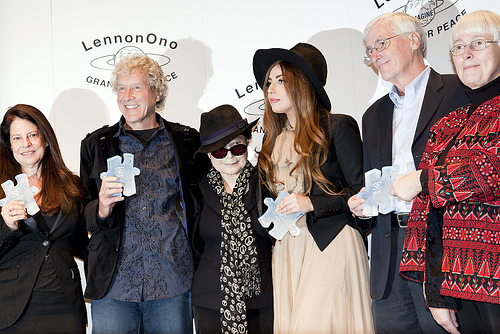 As pop star Lady Gaga took the stage, Yoko praised her for using her fame to put issues such as gay rights and body image acceptance in the media spotlight. Gaga’s song “Born this Way,” off her 2011 album of the same name, has been heralded as an anthem promoting acceptance, confidence and freedom of expression. Her charity, The Born This Way Foundation, is dedicated to eradicating bullying and promoting confidence in young people.
In the events’ impromptu keynote speech, she spoke of her Italian-American upbringing in Manhattan and the deep appreciation and respect she has for John Lennon. She ended the speech with a call to act: “I dare you to be brave enough to be compassionate in a cynical age. To be a true rebel of your time… I believe compassion is the answer.” She also offered Yoko an olive branch and a lotus flower seed, two symbols of peace, in honour of John and Sean’s birthday.
Rachel Corrie’s parents accepted the award on her behalf.  “Since Rachel’s stand almost ten years ago, it has been my privilege and grace to come to know activists as friends, both in Gaza, the West Bank, Israel, and in the world who share Rachel’s value,” her mother said. As noted author and novelist Christopher Hitchens passed away last December from oesophageal cancer, his wife, Carol Blue Hitchens, accepted his award. “My husband used to say, ‘It’s not what you think, it´s how you think,’ and I liked the way he thought,” she said in an affectionate conclusion to her speech.
During his acceptance speech, economist and author John Perkins said the world is beginning to change in big ways for the better. “I think what we’re all experiencing now is a revolution of consciousness,” he said, noting that economies which were once based on the consumption of natural resources have started to shift toward more sustainable and compassionate efforts.
Each recipient donated their award money to various non-profit organizations, ranging from the Elton John AIDS Foundation to PEN, an organization that protects writers’ rights and promotes freedom of expression. Pussy Riot’s award money will go toward getting the two remaining band members out of prison.
For more on the LennonOno Grant for Peace, visit Imagine Peace.