By now there are mountains upon mountains of photo books featuring Iceland, its landscapes, its people and its culture. Yet Tina Bauer, a German journalist who used to live in Iceland, saw reason to publish another one. In fact, it’s not her first book about Iceland. In 2011 she published one called ‘One Year In Iceland: A journey to everyday life,’ which was released at the International Book Fair in Frankfurt. Her new book, ‘Iceland—Lovely Home’ differs from the others in a number of ways. It’s about the people who live here, but not just any people; it’s about German women who have emigrated here. Through their stories she tells a greater story of emigration and the issues that come with it. We got in touch with her to learn more.
Why did you choose to portray German women in Iceland?
The first and most obvious reason is that I myself am a German woman who moved to Iceland. It mirrors my own life in a way. The second reason is that there are lots of German women shaping society in Iceland in a certain way. Some of them are taking part in social movements, some of them are living a quiet life in the countryside, but all of them are integrated parts of the Icelandic society.
How did you get in touch with your subjects?
I lived in Iceland myself for about two years, so I was able to use some of my contacts. I also got in touch with some of the women through other people. It was like ‘Oh, you’re German? Have you met this woman in … that does this or that?’ It was really interesting how it all came together. 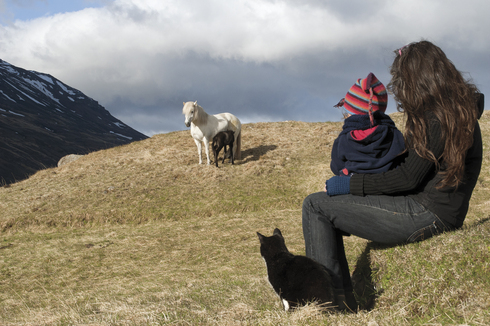 Which criteria were most important for your selection?
First of all, I wanted to create a unique reading experience. So it was important to have different stories from different people with different professions. Some of the stories are more dramatic than others; some of them are even rather romantic. I wanted to show all shades of life and I also intended to clear up the stereotype that young German girls just come here because of the horses. My book doesn’t just focus on the bright side of life. It was interesting to see which blows of fate those women had managed to overcome. In some cases those blows were even the reason that they emigrated to Iceland.
The way the portraits are set up differ from one to the next. Sometimes you chose a simple Q&A, other times the interview is embedded in a fluid text. Why did you choose to arrange it that way?
It always depended on the interview. Sometimes it seemed to make more sense to reflect the information received in the interview on the situation in which it took place. I also wanted to create an interesting reading experience. Some people enjoy reading plain interviews more than a documentary text. Due to my journalistic background, I experimented with the portraits to make every single one a unique reading experience and also to combine a variety of styles in the whole book.
When and how was your idea shaped?
I’ve wanted to create a photo book about Iceland since I came here. I started conducting the first interviews in 2010 but had to stop working on it in 2011 due to the International Book Fair in Frankfurt in 2011, for which I released ‘One year in Iceland.’ So ‘Iceland—Lovely Home’ had to be put on the backburner for a while.
Who might be interested in reading this book?
I intended this book to be for everyone; not only for women or people who have emigrated to foreign countries to build a new life. Since it offers insight into Icelandic society, it is for the curious who want to learn something about the country as well as for anyone who enjoys real stories from real people. It can also be for people who are in a situation that’s comparable, for example, starting a new job, deciding to move within the country they live in and so on.
So this book can also be seen as a guide for the good life in general?
This is where everything comes together: Iceland and its people mainly helped to bring this book into existence. It supplies portraits of individuals as well as a basic message: it’s not always about taking the path of least resistance, but also about making your own path, a personal one that you can look back on without regretting anything.
Why did you choose to crowd-fund your book?
Most publishers work together with professional photographers, which is why it’s very hard to get distributed by them as a rookie. Since crowd-funding has grown in popularity over the last years, it appeared like the best option for a freelancers like myself. There are plenty of platforms that offer the opportunity to crowd-fund. The most famous amongst them are startnext.de and kickstarter.com, and I chose startnext.de because it is a German platform, which allowed me to present my project in English as well as in German. This made things a lot easier for me. It still takes quite a lot of work to reach your goal via crowd-funding, but it offers an affordable solution for people with ideas to be able to realise them.
— 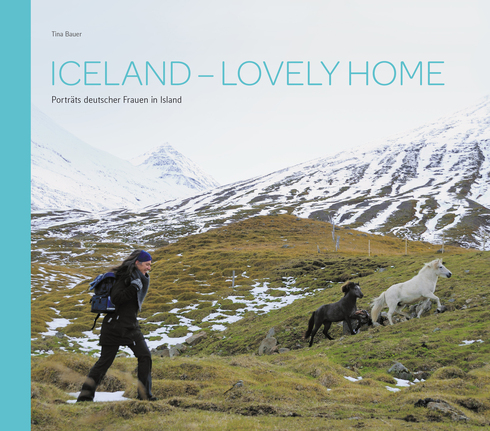 ‘Iceland—Lovely Home’ was released earlier this year in Germany. Now, the English version of the book is available at the Hafnarhús location of the Reykjavík Art Museum as well as the Sæferðir shop in Stykkishólmur.