As Hard Or As Easy As You Like: Skiing On The Troll Peninsula

Perfect spring corn on virtually every run, panoramas straight out of the Icelandic Sagas, excellent company and some of the finest guiding I’ve ever experienced—I’m on to a winner before we even throw into the equation the helicopter that would whisk us around the peaks of North Iceland’s Troll Peninsula.

Whilst the region is often buried under vast quantities of light fluffy snow, I was here in mid-May when you can more realistically expect to find the kind of excellent spring skiing conditions I encountered every day. If you want powder you need to visit in March or April when it’s colder, but I wasn’t unduly concerned about its scarcity because in place of powder I got to slice through perfect corn snow for up to almost 1000 metres at a time.

That alone would have been good enough, but it gets better. The top pitches of those runs were often down steep couloirs with angles of 40–45 degrees. If that sounds tame, take the average black run in a ski resort and then add another ten degrees to the pitch of the slope.

You don’t often get to ski slopes this steep on heliskiing trips for the simple reason that soft, light powder is likely to avalanche at such angles, but that was not the case with Iceland’s stable maritime snowpack. This meant scores of excitingly steep runs down the butter-smooth, wet ‘corn snow’ that covers the peaks of the Troll Peninsula.

Several of our headlong swoops towards the North Atlantic were first descents down terrain that had never before been skied. If that doesn’t qualify your average skier for ski hero status for at least a few minutes, I really don’t know what does. 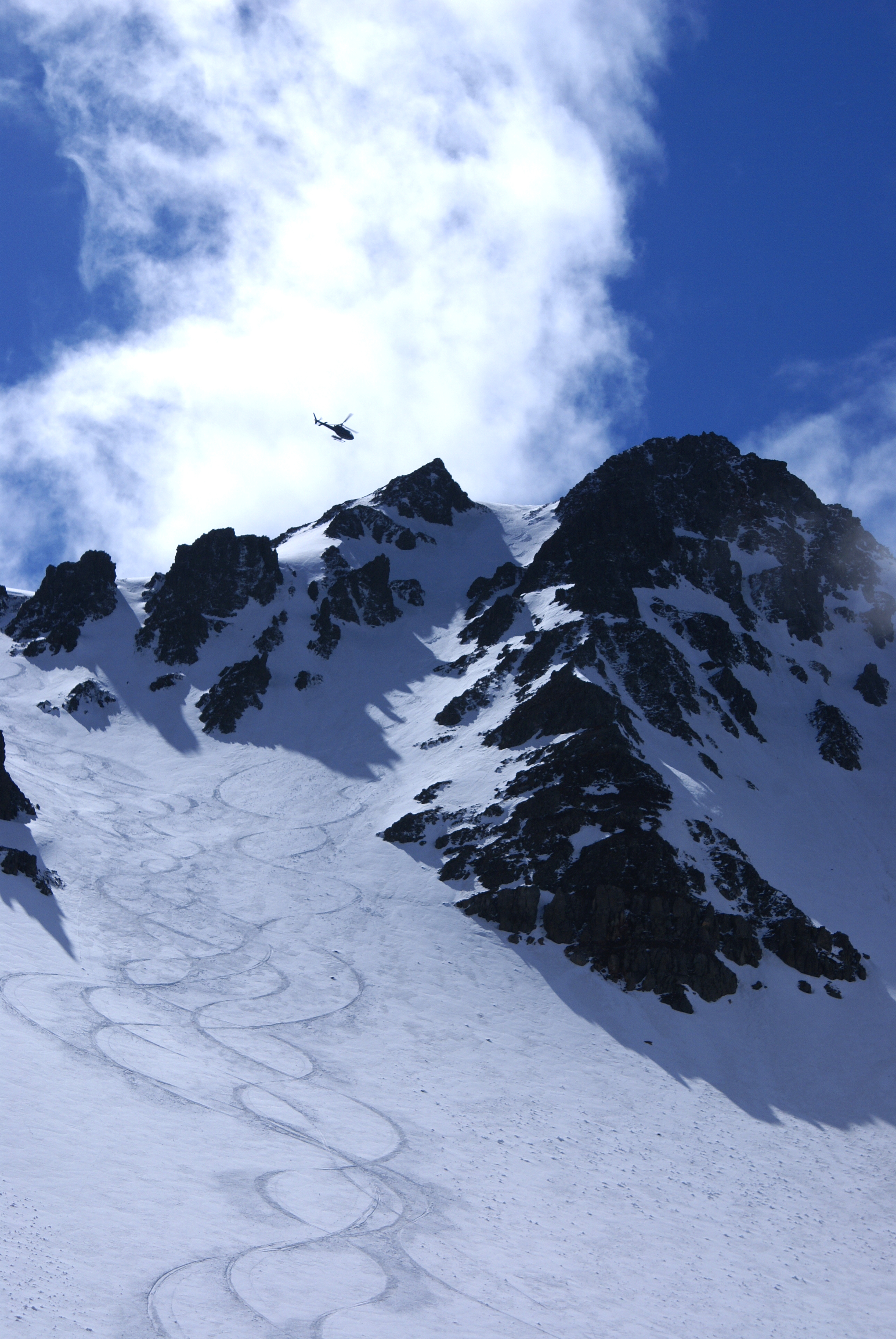 The most epic skiing

I was skiing with Jökull Bergmann, Iceland’s only internationally qualified mountain guide and the dude who set up Arctic Heliskiing on the Troll Peninsula where his ancestors have lived for over 1,000 years.

The edifying result of this for his clients is some of the finest skiing you’re ever likely to experience, apparently with no more effort than falling down a 45 degree couloir (and that really is easy, take my word for it).

This sense of comfort in and familiarity with northern Iceland’s harsh and potentially unforgiving environment only comes about after decades of experience and respect for that environment, which JB clearly has.

JB’s choice of descents, along with some magnificent helicopter flying by pilot Snorri Steingrímsson, means that each day’s skiing is a seamless flow of one epic run after another, interspersed by exciting pick-ups and drop-offs and short breaks before each descent to take in the giant, fantastical landscapes around us.

Our base was at Klængshóll, the farm owned by JB’s family at the head of Skíðadalur valley, above which Arctic Heli Skiing’s guests get their first taste of skiing—a short five minute flight away. Staying at Klængshóll is like staying with your best mate for the weekend—drop in, crack open an (expensive) beer, put your feet up and flop down in front of the TV.

And that’s exactly what you feel like doing after a hard day’s heliskiing. But if you think that’s tough work, you should try ski touring, another one of JB’s operations.

Ski touring involves attaching ‘skins’ to the base of your skis which allow them to slide forward but not backwards (you remove them when you eventually want to go downhill), and with the help of ski bindings, which have detachable heels, you can ‘walk’ uphill—usually for hours at a time to get to the summit of Iceland’s mighty peaks. It’s hard work, but the views, and the chance to explore isolated, untouched mountains make the effort more than worthwhile.

JB invites me back to North Iceland the following spring to give it a go. We’re accessing the peaks via a 60-foot, two-masted oak schooner and skinning up every slope we ski. On the second day of my adventure here our schooner ‘Hildur’ anchors in Rauðavík Bay before we take the tender ashore to climb 1,129 metre Skálavíkurhnjúhur on the Í Fjörðum region of the country’s north coast. 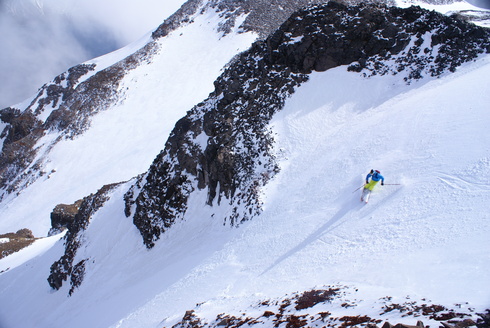 Iceland lends itself well to a trip like this where you use a boat as your base from which to ski. And a boat is by far the best way to access Í Fjörðum, a perpetually snow-capped landscape of mountains and moorlands that is virtually inaccessible by vehicle outside of summer and which has no settlements other than an occasional remote, abandoned farmhouse or an equally remote ‘summer house’ here and there along the shoreline.

Our days followed a regular pattern. Rise to bright sunlight glinting on the still waters of whichever bay we’d anchored in for the night, down a huge breakfast and then head ashore and start the hard work of climbing to our chosen summit.

One day I stood atop a mountain on my skis and looked down on the ocean, the small dot of Flatey Island just offshore, further north the outline of Grímsey Island through which passes the Arctic Circle (and which we’d later sail to, just to say we’d been to the Arctic) and beyond that, pretty much nothing? Few people had ever stood upon this summit, particularly in wintertime and I feel privileged to be there.

Every time we stop for a breather we’re greeted by views of elemental sub-Arctic landscapes—sky, snow, sea, mountains—it’s about as primal and as glorious as it can get and more than repays the effort. Most of the mountains that stand guard along this stretch of Iceland’s north coast top out at around 1000-metres, which means you’ve earned a descent as long as the biggest runs in most decent sized ski resorts when you eventually head back down.

But unlike most ski resorts this descent will be with just a handful of friends on untracked spring snow, with no sign of humankind to be seen anywhere—effectively you’ve got your own private mountain to ski down.

Whether it made me feel more worthy than the ‘easy’ option of heliskiing I can’t really say, but I know I’d go back and do either any time. 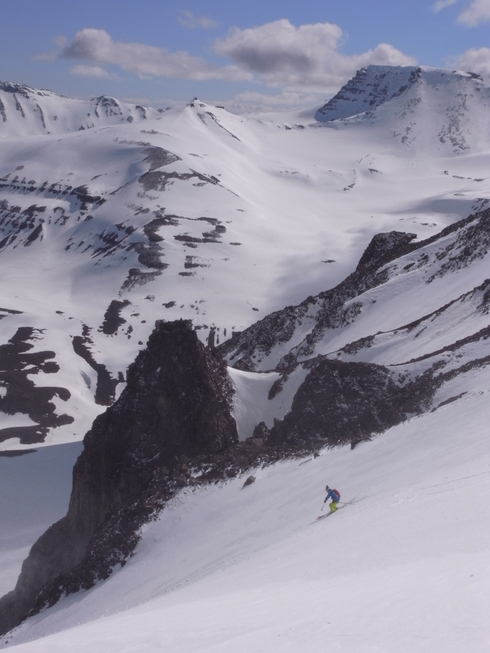 
Heliskiing on the Troll Peninsula can be booked through Arctic Heliskiing. For more Information see www.arcticheliskiing.com