Out There On The Ice Of Sólheimajökull

“This tour’s been a bit of a game-changer,” our guide Arnar says from the driver’s seat. “Its popularity has been unprecedented.”

This is their most popular tour, an updated version of a previous tour, which also included a northern lights sightseeing leg. “We can’t really promise the northern lights though, so now it’s kind of an added bonus if we see them,” Arnar says.

As I stumble out of the car and aboard the bus that I was supposed to be on, I’m warmly greeted by Védís, who says apologetically, “I think we must have left two minutes before you got there,” even though I’m sure it’s my fault. I turn to find a seat and face a full bus of tourists staring my way. I consider announcing “Góðan daginn everybody,” but think better of it and instead proceed down the aisle, sheepishly nodding to each seat.

Bad at running away from volcanoes

On route to the glacier we drive through mostly agricultural areas. “And this is Selfoss; here there’s a slaughterhouse,” Védís says, deadpan. “I hear some people here commute daily to Reykjavík, and some even knit on the way,” she quips.

The volcano Hekla is our next drive-by sight. The last few eruptions have been what Védís calls “very friendly,” if such eruptions exist, poking fun at Icelanders’ attitudes towards volcanoes. “We aren’t very good at running away from volcanoes,” she informs us. “We’re more often running toward them to take photos.”

At around 14:00 we arrive at Sólheimajökull glacier, which translates to “Glacier of the Sun”: an ironic name given our guide tells us it rains here about two hundred days of the year. We are lucky to hit one of the nice days.

After having crampons fitted to our boots, we are each issued an ice axe. Slightly intimidated by their presence, I ask Arnar about the walk’s level of difficulty. “If you can manage to walk around town for two hours, you’ll be fine,” he says and later admits the axes are mostly for the photos.

Aesthetically, the glacier is nothing short of spectacular. Ice sculptures are scattered amongst sharp crests and deep crevices, some coated in a thin sheet of ash, like an ice labyrinth. 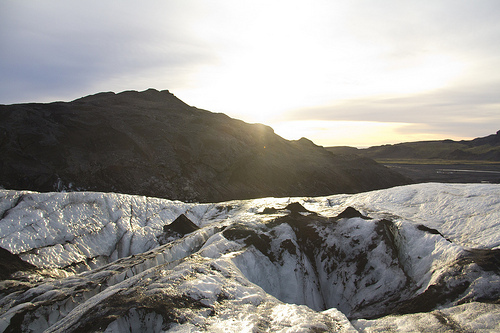 Sólheimajökull is a glacier tongue, extending down from its mother glacier, Mýrdalsjökull, which is Iceland’s fourth largest. Arnar explains the process of the glacier melting as if Mother Nature were making a pizza: first there’s the dough, the flat earth, and then there are the toppings, layer upon delicious layer of ice stacked on top of each other. The weight of the ice pushes down on the layers below, which then melt and run out along the glacier tongue into a lake at the bottom. This explanation is both informative and mouth-watering.

As we continue traversing the glacier, I notice how clean it is, but it wasn’t always this way. After Eyjafjallajokull erupted in 2010 and grounded flights across Europe, the entire glacier was black with ash.
Curiously, the ash we’re seeing today isn’t from Eyjafjallajökull; it’s courtesy of Katla’s last eruption, which blackened the glacier way back in 1918. Layers of ice froze over the top of the ash, holding it in place before being slowly released over the last 100 years as bits of ice melt. A collective ‘whoa’ encircles the group when we discover the ash is one hundred years old.

Despite the relative ease of the walk, it is not recommended to visit without a guide or group. Conditions can change the glacier overnight, disorienting even the most experienced mountaineers. Since his visit last week Arnar says the terrain of the tongue has changed dramatically.

We learn in days of yore, this shape-shifting landscape would bewilder neighbouring farmers. They feared the glacier, believing the ash heaps were trolls who would move about at night. Legend has it today that if you touch a troll you become blessed with seven years of good luck and fourteen years if you go so far as to kiss one. 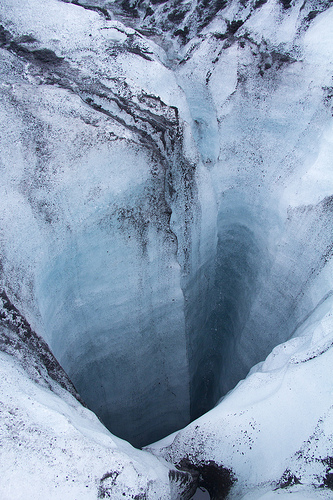 The plunder remains until next time

On the way back to Reykjavík we stop off at a couple of waterfalls. The bigger of the two is Skógafoss, one of Iceland’s largest.

Folklore has it an early settler of Iceland, Þrási Þórólfsson, hid a treasure chest at the bottom of the pond. His plunder is said to have been located, but never retrieved. Nearing the waterfall, we’re sprayed from about forty metres away. We decide to take a raincheck on retrieving the treasure, and resolve instead to take some spray-speckled photos from a distance.

Next stop we refuel at Hótel Anna, a cosy little bed and breakfast on the road back to Reykjavík. We are served generous helpings of Icelandic lamb soup. I ask Védís if she’s sick to death of the soup. “No, no, I actually love it,” she says. “I had it for lunch as well.” For dessert it’s skyr with chocolate chips, which I devour despite my stomach being well over-capacity.

Night falls by the time we reach Seljalandsfoss, the second waterfall, of slightly less epic proportions to Skógafoss but no less picturesque. Two huge floodlights bathe the waterfall in light. Védís escorts us along the slippery track behind the waterfall where there’s a cave.

From here, reflections of our shadows shimmy across the back of the waterfall to extraordinary effect. As we continue around the waterfall, the American lady in front of me takes a tumble and slides like a penguin front first down the grass slope. She stands up unhurt, and decides not to sue, but it’s a warning to potential night-time visitors to walk the track with caution.

We make regular stops on the bus ride back to Reykjavík to scope the sky for Northern Lights. By this point we don’t particularly care whether we see them or not. We’ve seen more than enough highlights for one day. 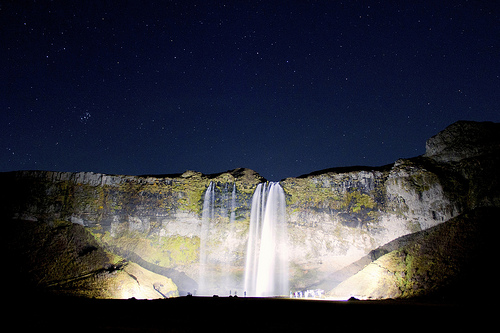