“You don’t have to be crazy to go swimming in the sea, but it helps.” So says the man sitting next to me in the hot tub at Nauthólsvík, Reykjavík’s Geothermal beach. We’re facing out toward the Fossvogur bay, and if you listen carefully, you can hear the sound of the waves lapping at the shoreline. It’s six in the evening and pitch dark. But for the time being, at least, the perpetual drizzle and fog, which have hung over Reykjavík all week, has lifted, so the twinkling lights of Kópavogur are visible across the water. The man next to me is still laughing to himself, but I don’t need any convincing on the crazy count. Because I’ve just been sea swimming in the North Atlantic, and I think I want to go back.

It’s worth admitting from the get-go that when I proposed the idea of writing about Reykjavík’s Sea Swimming and Sea Bathing Association, I didn’t think that I would be actually getting into the water myself. I grew up in the landlocked, Sonoran desert of Arizona, and have nursed a lifelong suspicion of large bodies of water. I’m also petrified of being cold, and am a strictly two-scarf sort of lady. But when I found myself invited to join a few members on their weekly swim, it seemed churlish to decline. And anyway, I figured, this would be a great thing to Have Done: Arizona Girl Bathes in North Atlantic and Lives to Tell the Tale.

I was met by Ragnheiður Valgarðsdóttir, or Raggý, the head of the association, and three other members: Kristbjörg Rán Valgarðsdóttir, sporting a whimsical flowered swim cap, Kristín Helgadóttir Komplett, wearing a hand-knitted maroon wool bathing suit over her regular one, and Þóra Kristín Ásgeirsdóttir, the Association’s secretary and “Master of Disaster,” so-called because she has a master’s degree in disaster planning.

The ladies lend me a pair of neoprene boots and gloves–particularly important on colder days, they tell me, noting that the sea is currently 1.6C (35F)–and then whisk me out past the long hot tub and down a ramp to a small cove. Cleverly, my handlers don’t give me any time to rethink what I’m about to do, but simply tell me to walk in at a normal pace without stopping. I’m given a steady stream of encouragements, reminders, and advice, which I try to absorb as I hit the blindingly cold water and walk in up to my waist:

“You have to tell yourself to breathe: you might forget to breathe.”

“It’s important to keep talking, so that we know where everyone is.” 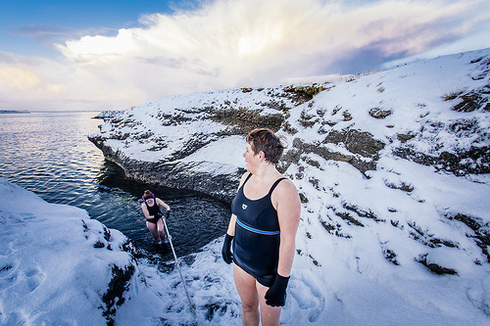 A healthy sort of shock

Somewhere behind me, I hear several students running into the water, splashing and screaming. “It’s good to scream sometimes,” Raggý says. “You can scream if you want.”

I don’t want to scream, though, I want to focus. I need to focus. I’m submerged to my shoulders now, but I haven’t gone numb like I expected. Rather, I have a seriously intense case of pins and needles, and my whole body feels like it’s vibrating. Not chattering, mind you–vibrating.

This is adrenaline, Þóra tells me, and it’s a good thing. The shock your body goes through when it is submerged in water so cold is actually what makes the experience a healthy one. Your immune system goes into hyper-drive, thinking, basically, that your system is under attack. Your blood rushes to your organs to keep them warm, aiding in improved, if temporarily slower, circulation. As your blood circulation slows, tissue swelling decreases, making cold water dips particularly good for anyone who experiences joint pain. And your body expends a huge amount of energy trying to keep warm, burning a lot of calories in the process.

Having bobbed in the shallows for a minute or so, we dog paddle a bit further out, and I notice that my arms and legs aren’t moving quite as well as I might expect them to, driving home the warnings I’ve gotten about not sea swimming alone. The ladies told me that they sometimes stay in the water for as long as twenty minutes, although we wouldn’t be doing that today. (I assume at the time that this is because of me, which is likely true, but later research also indicated that 15 minutes would be at the very outside of how long you could safely stay in water of this temperature.)

My mind starts to wander a bit–I find myself thinking about how more victims aboard the Titanic supposedly died due to hypothermia than drowning. But then, for seemingly no reason at all, everything goes from being incredibly uncomfortable to incredibly awesome. I’m elated, thrilled by the amazing absurdity of wading into Icelandic waters in late November, thrilled by loveliness of the surroundings, by the good-natured company. I feel energised and capable and just really damn cheerful. 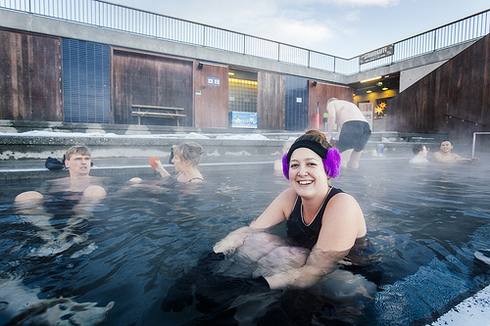 After about five minutes, we start heading back to the shallows. Raggý tells me to get out of the water slowly, to take my time readjusting to the air temperature and walking back to the hot tub. It’s a pretty cold day–I arrived in a calf-length thermal coat–but now the air feels like a thick, heavy blanket. It’s like being encased in a marshmallow.

We walk back to the hot tub and find places on the east end where, unofficially, all the regular sea swimmers sit–the other side is mostly the province of foreign exchange students cupping hot mugs delivered from the snack bar. It’s a surprisingly mixed group of people: serious athletic-types with neoprene swimming hoods, couples, children, groups of women, teens, and even an elderly man who is being helped out of the tub and down to the shoreline when we first sit down. More than half of the people soaking are wearing thick woollen caps.

As I start to defrost, my companions regale me with stories about the SÒkýrnar, or Manatees, the channel-swimming team that Raggý, Kristbjörg, and Kristín belong to, and which became the first all-women Icelandic relay team to swim from Dover, England to Sangatte, France in June 2013. They also tell me more about the yearly events put on by the Association, which has around 200 members. There are regular long distance swims: the shorter relays being the 600 metre swim around the Fossvogur bay, and the summer swim to the island of Viðey (900 meters one way).

There are also a wide range of social events–hot tub screenings of “Jaws” and “The Creature from the Black Lagoon,” tub-side literary readings, fashion shows of hand-knitted swimwear, and New Year’s Day dips which find many rushing into the ocean wearing their holiday finest. Watching everyone joke and laugh around me, it’s easy to see that this is an incredibly jovial group of people who obviously enjoy each other’s company–all the more so, I’m sure, because of their unusual shared hobby. This is not, after all, everyone’s idea of fun.

Just before closing time, as the “Baywatch” theme song is piped over the speakers, someone asks if I’ll be back for another dip next week. Yes, I say, without thinking twice. Absolutely.

The Sea Swimming and Sea Bathing Association of Reykjavík is open to new members. The annual fee, which grants you free entrance to yearly events, such as movie screenings at Nauthólsvík, and helps to pay for open swimming events throughout the year, is 3,500 ISK. If you’d like to give sea bathing a try, you can borrow neoprene boots and gloves at the desk and ask to be introduced to members who can accompany you on your first dip. Learn more about the sea-bathing association here.

SPONSORED
Reykjavík Grapevine Walking Tours: Throw A Frisbee For Pollý
SPONSORED
Into The Glaciers: See Them While You Can