A 22-year-old student now holds the honour of bearing the undisputed nerdiest tattoo in the country.
Last February, the website Nörd Norðursins (“nerd of the north”), in cooperation with the tattoo and piercing parlour Bleksmiðjan, initiated a contest asking Icelanders to show and vote for who had the nerdiest tattoo in the country. 69 photos from 50 contestants were entered in all, with tattoos featuring figures from video games, superheroes, comics, science, and other nerdish topics. Site visitors were then asked to cast votes for the nerdiest tattoo of them all.
The winning tattoo, shown above, belongs to Oddur Gunnarsson, a 22-year-old student in technical drawing at Tækniskóli Íslands. For those who don’t already know, this is Skull Kid, from the Legend of Zelda: Majoras Mask. The tattoo was a huge hit, getting 1,420 votes in all. Oddur also has a tattoo of the Triforce symbol from Zelda, as well as a “kodama” from the Studio Ghibli film Princess Mononoke.
Apart from the title of having the nerdiest tattoo in Iceland, Oddur also won 25,000 ISK credit at Bleksmiðjan.
The runner-up was Óskar Hallgrímsson, for his shoulder tattoo of Albert Einstein. He wins 10,000 ISK credit at Bleksmiðjan. 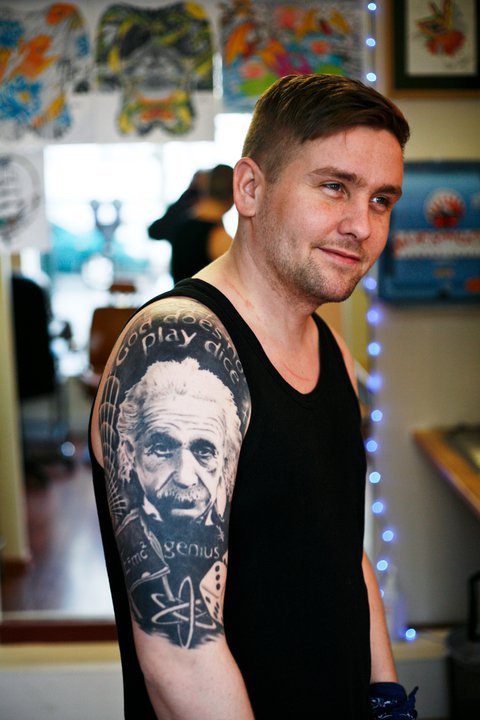