From New Year To New Mountain

It is 1 AM. My phone is going crazy. Emails and Facebook messages are flying around. Why? A volcano is erupting, I am a volcanology student, and this is the most exciting thing since… well, the last time something erupted.
Our excitement was excusable, though. Many of us came to study in Iceland because of this possibility. We’d all been following the events beneath Eyjafjallajökull since 2010 began, hoping to see some action. But what had we been watching, exactly, and what has happened since then? Well, sit yourself down and prepare for a brief and hopefully somewhat interesting lesson in volcanology…
Early tremors
It started around New Year, when earthquake activity began to increase in the area of Eyjafjallajökull, in southern Iceland. This was particularly exciting since the volcano in question hadn’t erupted since 1821-23. GPS satellite measurements showed that the volcano was actually inflating—pressure was building up inside, causing it to bulge outwards. A so-called intrusion event was probably taking place: magma, molten rock, was pushing up into the volcano from below. In early February, the groundwater became acidic due to gases from the magma seeping up through the rock. Despite these signs, chances were it would be just another benign intrusion, which would never reach the surface—as happened here most recently in the summer of 2009.
In early March, earthquake activity literally went off the chart: a huge ‘earthquake swarm’ had begun. Something unusual was going on. Debate amongst scientists was hot. This seemed like something different from the event in 2009, but volcanology is a fickle subject and it’s always impossible to say for sure what a volcano is going to do. After a couple of weeks, the earthquake swarm died down. It looked like things might be coming to a halt.
Eruption!
Then, on the evening of March 21st, quite the opposite happened. Volcanic tremors began—a sort of constant shaking of the ground—which means that magma is on the move. The earthquakes were getting closer to the surface, too. Finally, at about midnight, the first report was made of light being seen coming from the glacier. The student communications bomb began. Information came trickling in throughout the (sleepless) night, but come daylight a better picture formed of what was going on. A volcanic fissure (basically a crack in the ground) about a kilometre long had opened up on the ridge between the Eyjafjallajökull and Mýrdalsjökull glaciers, fountaining lava a couple of hundred metres into the air and forming spectacular lava flows.
The initial official reaction was one of caution but it soon became clear that the eruption was small and not beneath the glacier, which was frankly quite a relief: a jökulhlaup (glacial meltwater flood) would almost certainly have been the most dangerous product of such an eruption.
The weather in the first few days hampered attempts to actually see anything, but things soon cleared up and it became easier to observe what was going on. Roads and even the hiking trail along Fimmvörðuháls (which the fissure basically cut in two) eventually opened up, allowing for much better access, even by the general public.
Pretty small, super exciting
In the weeks after the first fissure ripping open, the eruption has remained pretty small, but extremely exciting. It’s unusual to be able to view an eruption so well, especially an Icelandic fissure eruption. A couple of beautiful lava falls—basically waterfalls of lava (!)—have formed, cascading down into valleys near the eruption site. A second fissure opened up a couple of weeks after the first, pouring out even more lava. And all of this activity is beginning to form an impressive little hill up on Fimmvörðuháls, one that will soon need a name…
The Grapevine managed to get two of us on a snowmobile trip to the volcano a couple of weeks after it began, courtesy of the kind folks at Iceland Rovers and Snow.is. Even as someone who studies these things, it was incredibly humbling to get so close and to bear witness to what is going on up on that ridge—it’s impossible to comprehend until you see it for yourself, really. Even if you make the 10+ hour hike to and from the site, it is still mind-blowing and absolutely worth the effort (and warm clothing!). As for our tour up there: it involved super jeeps and snowmobiles, was well organised and got us exactly where we wanted to be!
So what will happen in the future? Well, no one can really predict how long this will last, but at the time of writing it seems to be going strong. There is certainly the possibility of more fissures opening, even beneath Eyjafjallajökull glacier, which could produce a jökulhlaup. It’s also worth keeping an eye on the much larger neighbouring volcano, Katla. The last time Eyjafjallajökull erupted, Katla followed suit 18 months later. The two volcanoes appear to be linked somehow, so an eruption at Katla (which is statistically “overdue,” although this is a terrible method of volcano forecasting) should not be ruled out.
But for now, don’t worry. Sit back, relax and enjoy—it’s not often you get to see the Earth’s power so beautifully (and accessibly) displayed!
James Ashworth is currently studying for a B.Sc in volcanology and Earth sciences at the University of Iceland. 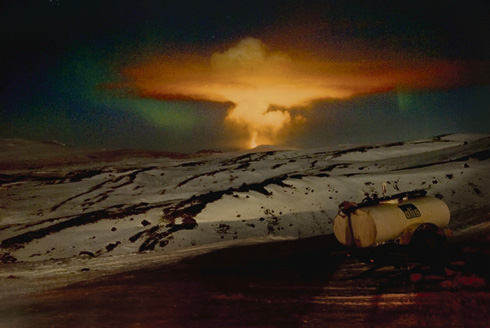 James’ Top 5 Icelandic Eruptions
Amazing as the current eruption is, it’s still really rather small—at least compared to some of the incredible eruptions Iceland has seen throughout its history. On average, an eruption here occurs about every 3-4 years. Here are my picks for the top five.
1. Laki (Grímsvötn),
1783-74 AD
The Laki eruption was a fissure eruption much like the one we are so fixated with now, except it was larger. A lot larger. The Laki fissure system extended a massive 27 kilometres, and erupted for 8 months straight, pouring out huge floods of lava. The large amounts of ash and poisonous gas produced had the effect of killing about a quarter of the Icelandic population, mainly due to failing crop and livestock production. It is also attributed with helping to start the French Revolution, again due to crop failure.
2. Eldgjá (Katla), 934 AD
Another huge flood lava eruption, the Eldgjá fissure opened up in 934 AD and produced the largest volcanic canyon in the world—about 57 kilometres long, and up to 270 metres deep and 600 metres wide at some points. The effects of the Eldgjá eruption are less well-known than those of Laki, but there is no doubt that this was a massive event. There is evidence of it having triggered climatic changes as far away as China, leading to thousands of deaths.
3. Hekla, 1104 AD
Hekla is infamous as being the Icelandic gateway to hell, and perhaps its most destructive eruption occurred about 900 years ago. Thankfully, most Hekla eruptions are fairly peaceful (at least after the first 6 hours or so), but this time it produced a very explosive eruption, sending ash and tephra (small pieces of volcanic rock) high into the atmosphere. This then came back down on over half of the country. Many houses and villages were buried and had to be abandoned.
4. Krafla, 1975-84 AD
Krafla’s most recent eruption was much smaller than those above, but makes this list because it was just so damned beautiful. Consisting of nine separate eruptions, this was one of the first times that a large fissure eruption could be observed, analysed by scientists, and filmed by cameramen. Plus it actually yielded some important scientific observations that are still useful to this day and aid in our understanding of these complex beasts.
5. Heimaey (Vestmannaeyjar), 1973 AD
Heimaey makes my list because, despite being a small eruption, it has such an amazing story attached to it. Almost without warning a fissure opened above the town of Heimaey on January 23rd in the middle of the night. Luckily a storm had kept the fishing boats in the harbour overnight, and so everyone could be evacuated safely. Then many of the island’s 4000 or so residents came together to battle the lava flows with cold water pumped from the sea, saving their harbour. Much of the town was buried beneath ash, tephra and lava but the island quickly got back on its feet.