On A Date With: Oyama

This time last year, the band Oyama did not exist. By May, the five-piece was playing gigs and having their praises sung by fans and critics alike for their grungy, gauzy, early ‘90s slow-core tunes. They landed a management deal with Projekta after playing every night of Airwaves in November. Now they are headed to by:Larm in Oslo in two weeks, followed by SXSW in Austin, Texas this March and The Great Escape in Brighton, England  this May.

As news broke of them launching their first EP, ‘I Wanna,’ we decided it was time to take this hard working band out for some well-deserved fun and games. So we took them horseback riding. We picked them up the morning after their EP release concert at Faktorý and got to know them as we headed to the stables.

When you formed this band, did you hope or expect to take this direction so quickly?

Júlia: I don’t think any of us thought this would happen, but at the same time we all worked really hard and put all our energy into this.

Úlfur: Over a year ago, I realised that I had been in bands for four years but none of them played my favourite kind of music, which is the kind that Oyama plays. This kind of nineties, indie, melodic, woozy rock with slow eerie vocals. Nice stuff like that. I decided I had to form a band that played what I really like.

Is it all your favourite  kind of music?

Júlía: It’s not my top favourite but it’s definitely something I find really fun and that I can perform. I mean, I really like rap music but I can’t rap, so… [laughs.]

Úlfur: I just started writing songs that I would want My Bloody Valentine, Sonic Youth or Dinosaur Jr. to write. Thinking like, if I was in those bands, what kind of song would I write, and I worked with that.

Is that not being a  bit derivative?

Úlfur: No, because they are still our songs. We are still writing our own melodies. We’re just under the influence, you could say, but they would never write the songs we write.

Júlía: For me the most important thing is not writing “shoegaze” music but writing good music, so if they wrote shoegaze but they were shitty songs, I wouldn’t have joined the band. Honestly, when I showed up to the first practice I only knew Bergur, and I was really bored and thinking, “oh shit, maybe they’re terrible musicians, but I’ll give them a chance!” [Everyone laughs.]

Úlfur: I wouldn’t even call us a shoegaze band because our new songs are already starting to go in another direction. More psychedelic.

Júlía: Yeah, we’re moving a little bit more into our own thing and the people who come to our shows seem to be really into it, so maybe that’s a sign that we should move a bit further.

How does it feel to have had all these big things happen in the last few months and to be on the cusp of more?

Júlía: It’s great, but scary. I’ve been making music for so long but more as a hobby and now it’s more like work.

Rúnar: Extremely overwhelming, but really enjoyable. I love it. When I was playing with Me, the Slumbering Napoleon, we were so lazy. It was just dudes hanging out and making eccentric music that only we kind of got. Oyama is so active and it’s so much fun. We’ve had a lot of success and it’s like… holy shit. This could be for real.
—
Horsing Around
Our trip took place the day after their EP release concert, which they naturally followed by some serious partying. After a rousing ninety-minute horseback ride through a snowy lava field outside of Hafnarfjörður, they looked a little exhausted and three of them were frozen to the bone (and that’s why you always wear the coveralls!), but also invigorated and refreshed. Here’s what they each had to say about their experience. 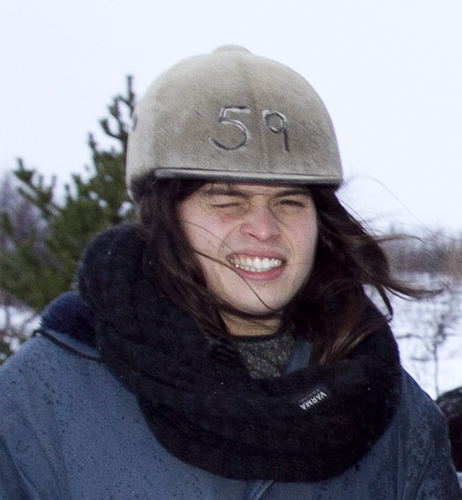 Although the excursion was refreshing enough to cure his hangover, by
the end he was riding shotgun with the tour leader, who was firmly
holding onto his horse’s reins. “I think it’s because it was very
windy,” he said. “It makes the horses very tense and mine was freaking
out. She just wanted to run back home.” 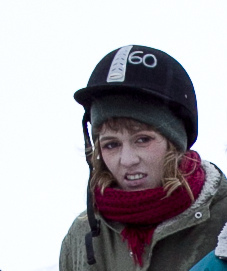 Having been a regular equestrian as a kid, she was the only experienced rider of the bunch and didn’t let a little flu and fever stop her from having a nice day. “She was a very good horse,” she said. “She just did everything I told her to so that was nice.” 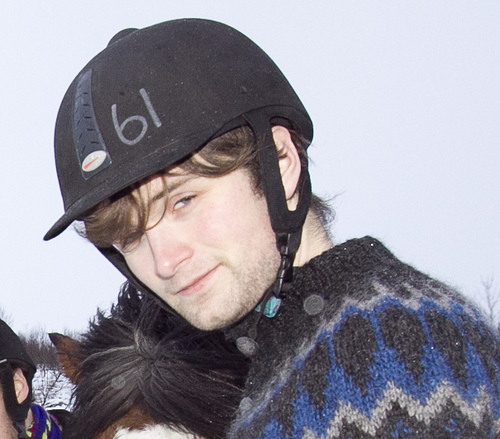 Seemingly the most exhausted of the lot, he bundled up in a snowsuit and saddled up on a horse that looked like it had a bit of an attitude problem. “He’s okay, but seems to have a really big head,” he said. “He just kept biting on the metal thing!” 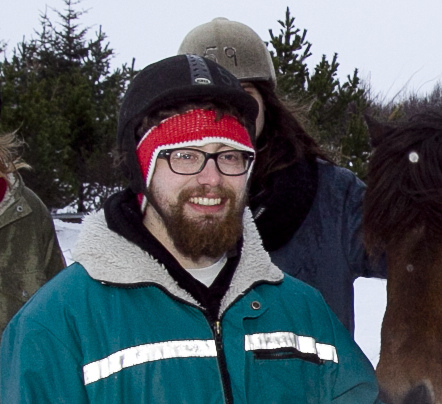 (also with Me, the Slumbering Napoleon)

Since he had never ridden a horse before, he admits being nervous
beforehand but concealed it well. “I was always kind of afraid of riding
and I’m surprised how it wasn’t a big deal,” he said. “My favourite
part was when my horse wasn’t running, but I’m really glad we went. It
was great.” 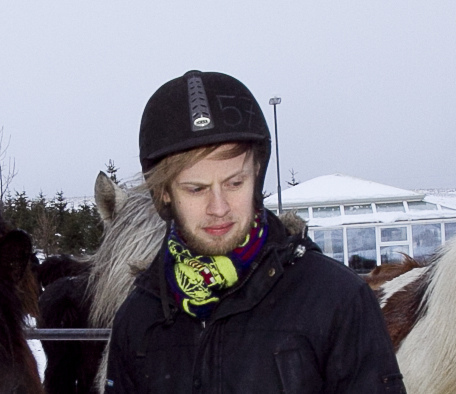 Prior to arriving at the stables, he jokingly maintained that he had
never seen a horse. He, too, opted out of the snowsuit and it made his
already bad hangover all the worse. “It was fun, but I had a pretty bad
headache,” he said. “And it was extremely cold. We will never forget
it.”
—
This is the first instalment of a new series where we take an interview out on an activity. Really it’s just a way for us to scam a date with some of the super cool, culturally relevant and interesting people in town. Lucky us!
—
Horseback riding trip provided by Íshestar, located in Hafnarfjöður, 20 minutes from Reykjavík.
For more information about the tours they offer go to www.ishestar.is