Through my travels, I’ve been lucky enough to meet a ton of Icelanders who have become some of my closest friends—I might call them family. At this point, I’m proud to say I’m fully enmeshed in the “Icelandic Connection” now, which means being open to Icelandic travellers (individuals, artists, musicians, grandparents—you name it) to my home in Philadelphia. The “Iceland Connected” have a code to my home’s lockbox for easy access. If you don’t mind cats, the place is yours. Be in touch.

I’ve thus gone to Iceland a couple of times, and always greatly enjoyed my visits. This time, when I learned that I had an opportunity to make a third trip to Iceland, I crowdsourced suggestions as to where to stop on my way to Nuuk, Greenland, where I would be working on a research project about Greenlandic artists. Based on friends’ suggestions, my plan was to skip Reykjavík and head Northwest to Ísafjörður. As I would learn, they advised me well.

I’d never been to the West Fjords. Over the years, a myth of Ísafjörður has built up for me, mostly based on the stories I’ve heard about the music festival Aldrei fór ég suður (“I never went south”), which takes place during Easter. I’d heard that the festival involves over 40 bands, and unlimited drink on limited time, so they pack it in. Impromptu collaborations and aural stumbling and bumbling. A festival that seems to be the antithesis of Iceland Airwaves, one that celebrates passion and insanity — one where commerce and market forces are checked at the door. Sadly, the timing just didn’t work for me to experience it this time, but there’s always next year. 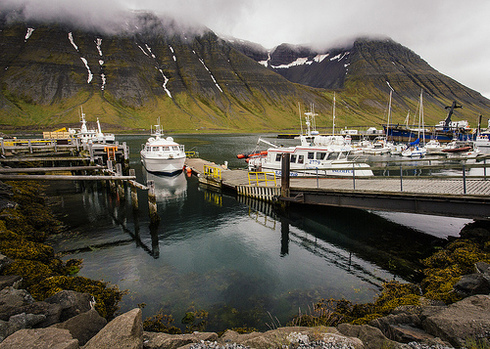 Getting to Ísafjörður was an odd adventure, which was my fault entirely: I misread my layover-filled itinerary while trying to get the cheapest tickets possible. One day of travel from Philadelphia to Newark to Boston to Reykjavík to Ísafjörður. An expected few hour stopover in downtown Reykjavík turned into a mad dash from Keflavík to Reykjavík airport to catch my Air Iceland jumper flight. Fuck it. Who needs sleep?

Upon arrival in Ísafjörður, I settled into my accommodations—my friend’s sister’s bedroom that was kindly cleared out for an incredibly comfortable stay. The first day was mostly spent hanging out at the restaurant Tjöruhúsið (“The Tar House”), a culinary legend that I had heard about and had to see. The action was non-stop, the food amazing. There are no menus—you only get what is served to you, the catch of the day at the chef’s discretion, for a fixed price. I ate cod cheek for the first time. It was fatty and crispy and melted in my mouth. Aside from serving food, the restaurant seems to act as an active community hub, with all kinds of people dropping by throughout the day, sharing stories and having a taste of whatever’s being cooked up at the time. At the end of the day, I fell asleep, happy and satiated even though my room was filled with bright sun. I think I was too tired to be bothered by it.

I spent my second day in Ísafjörður venturing to the nearby villages of Þingeyri and Suðureyri, via the Vestfjarðagöng road tunnel. The tunnel was built in 1996, and remains the only tunnel that I’ve ever seen that has an intersection. Parts of the tunnel are one lane, with courtesy pullovers to accommodate the traffic, at times the drivers are so polite that it slows down traffic. Getting back to town, I was invited to an impromptu dinner party for eight travellers and locals, where Icelandic lamb was served. After hours of revelry, we thought we’d try to catch a set by Prins Póló, who were playing in the nearby village of Flateyri. We missed them, but hung out and drank beers near the water in Önundarfjörður as the sun shone brightly upon us. It was past 3 AM.

I decided to head home. While cabbing in full stupor, I was asked, “What are you doing before you leave?” I answered, “Going to Vigur.” And my friend replied, “that should be good. You’re going at a very ‘puffetic’ time,” referencing the legion of puffin, that inhabit the tiny island. 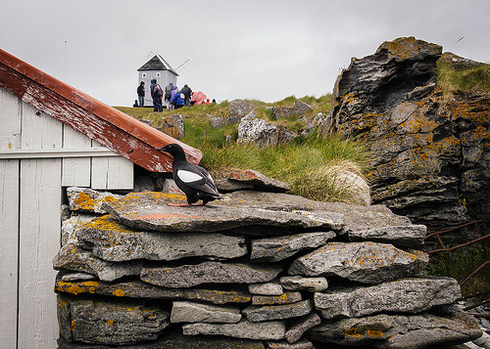 The beginning of the end of my time in the Westfjords started with a West Tour to the island of Vigur, where I would see how down is harvested and puffins managed, and get a glimpse of the tranquillity of a simple life. The tour is booked solid, but it’s not so crowded you can’t breathe. The boat is filled with locals as well as tourists from Japan, Australia, France, Denmark, and the US. As we depart, the sea air is crisp and refreshing, amplifying the meditative loop that’s played in my mind over the past two weeks. As we cross the calm waters, I’m reminded of a quote from a wall decoration I saw at the dinner party the night before:

“In the embrace of blue mountains, where the cold wave sparkles. In the high cliff mountain halls, the kind elfin queen rules. Which makes the torches glitter around the dark mountain passes, as the evening beams swell and kiss Ísafjörður.”

As we floated towards our destination I was fully embraced by the blue mountains. I’ll return to this memory, I believe.

Upon our island arrival you’re smacked with tranquillity—if tranquillity can smack. The first stop is a rock formation housing nesting eider ducks, the leading producers on the 2 kilometre long, 400 metre wide island. The eider ducks just hang there. Calm, yet protecting. Resting on their eggs. Trusting that the humans will let them be.

As we begin our march around the island, I walk on rocks, sea urchin shells, grass, random down and moss. Next to me, a 7-year old child from Ísafjörður collects a fistful of sea bones. I can’t help to think how normal this might all seem to her. As we walk the 90-minute stroll around the island, the yelps and coos of the eider males and black guillemots continue to amplify the calmness. Arctic terns also fly overhead. It’s odd to think that a place so filled with peace is named after a spear (“vigur” means spear, I learned).

There are other indicators of otherworldliness on the island. Our guide stops periodically to take questions and give us a bit of history. The same family has lived in Vigur for the past 135 years, managing over 3,600 eider nests. The family ensures that the eider down is collected and processed without disturbing the nesting ritual. To keep the eider ducks undisturbed, the farmer replaces down with fresh cut grass.

The family manages the land in other ways, too. For example, a portion of the puffins is culled as a conservation strategy. Puffins dig up the island dirt lush island grass, creating holes for breeding and defecation, thus speeding up the process of land erosion.

There are around 8,000 puffins on the island. These impressive birds live by the proverb: “one should not shit where they eat”—creating separate holes for each activity. That their fascinating way of life can also potentially dismantle the land and have it forever disappear into the sea is astounding to ponder. I couldn’t help but think, “this island is a tranquil toilet that generates life and softness,” the softness being the pounds and pounds of down harvested each year.

The tour is coming to an end, and I walk by the escapiest escape cabin overlooking the Hestur (“Mt. Horse”). It’s a deep red A-Frame wood and corrugated metal shack covered in windows hugging the island cliff for safety. I want to live there. We’re ushered to the inhabited part of the island for cakes and coffee in the old rustic farmer home, painted a beautiful and crisp yellow. We drink and eat with the smell of a nearby smokehouse in the air. I feel paused. I feel good. Thankful for the thankful things.

In the Icelandic way, we’re urged, but not rushed, back to the boat to return to shore. I sleep the entire way back, waking up again in the blue mountains’ embrace. As I step on the dock, a traveller’s anxiety sets in. I need to be in Greenland tomorrow. World is weird. World is wide. I’m still trying to figure things out. Maybe Nuuk will help.

Westfjords, see you next time.

Trip provided by Air Iceland. Check out their action packed daytrips to places like Ísafjörður, or call them on +354-570-3000.

More Refugees Than Ever Enter The Country

Labour, Management & Central Bank Square Off Over Inflation–And How To Stop It