An activist group of pensioners and people on disability, protested in front of the Prime Minister‘s office on Thursday afternoon.
This was the fifth time this summer that the group organized a performance act to protest how low their pensions and benefits are, pointing out that while they can hardly afford food and medicine, directors and managers of state-owned companies recently received up to a 20% pay rise.
The group tied a string between the two statues in front of the building in Lækjargata and stringed up empty bags from various grocery stores and pharmacies, symbolising how seniors and disabled people can‘t afford to fill them up wit groceries and medicines.
People showed up with signs and banners and banged on drums, pots and nearby street signs to make themselves heard.
One of the posters spelled out how one disabled person received 46.000 ISK per month (after tax) as benefits in 2006, but now receives only 43.000 ISK a month. Meanwhile, food prices have gone up by 68%.
The protesters demanded equivalent increase of benefits and pension to that of the highest paid director of state-owned companies, Hörður Arnarson CEO of Landsvirkjun, or a raise of 287.000 ISK.
Around 35 people showed up for the protests, which were peaceful and under the watchful eye of the police that soon arrived. However, there was no respons from staff of the Prime Minister‘s office, nor did any politician make an appearance. 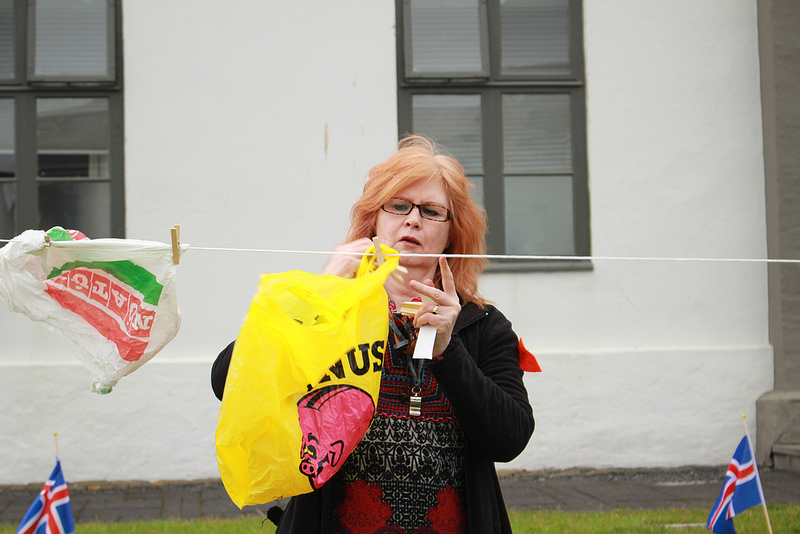