Party Behind Financial Crisis Back In Business

The Independence Party, the party which led the country into the 2008 economic meltdown, has won the largest percentage of the popular vote in the 2013 Parliamentary elections held yesterday.
According to the final count posted on RÚV this morning, the Independence Party has received 26.7% of votes and the Progressive Party 24.4%, giving each party 19 seats, which amounts to 38 of the 63 seats in Parliament. It is likely that these two right-wing parties will form a coalition government, RÚV reports.
The outgoing coalition government formed by the Social Democratic Alliance and the Left-Green Movement has lost 27% of the vote since the 2009 election. The Social Democratic Alliance has lost 11 seats, and now sits with nine, while the Left-Green Movement has fallen from 14 to seven seats.
Two new parties have won a small piece of the pie. Bright Future, a pro-EU, liberal green party (and sister party of the mayor of Reykjavík Jón Gnarr’s Best Party) has won six seats with 8.3% of the vote, while the Pirate Party, running on a platform of increased freedom of information and direct democracy with Birgitta Jónsdóttir at the helm in the Southwest district, has won three seats with 5.1% of the vote.
Below is a breakdown of the percentage of popular vote and seats awarded: 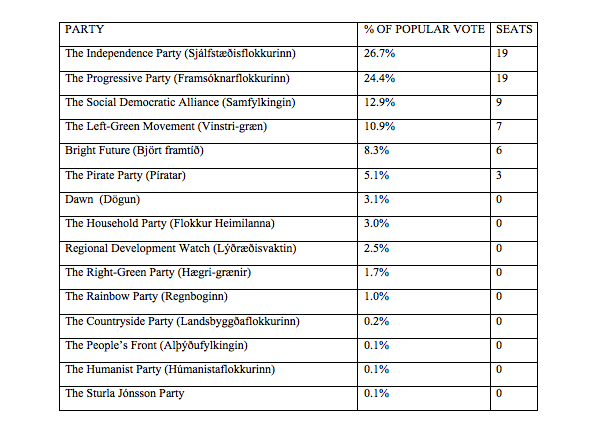 Related: Grapevine´s liveblog of the election