Market and Media Research (MMR) has released the results of a poll on government support for the period of 7-12 March.
The poll posed up to three questions to all respondents. First all were asked “If elections were to be held today what party would you vote for?” If the respondent was undecided they were then asked “What category would you most likely choose?” If they reply was still undecided then the pollster would ask “Is it more likely that you would vote for the Independence Party or another party?” If respondents chose “another party” then their vote would be distributed evenly among all other parties except the Independence Party. 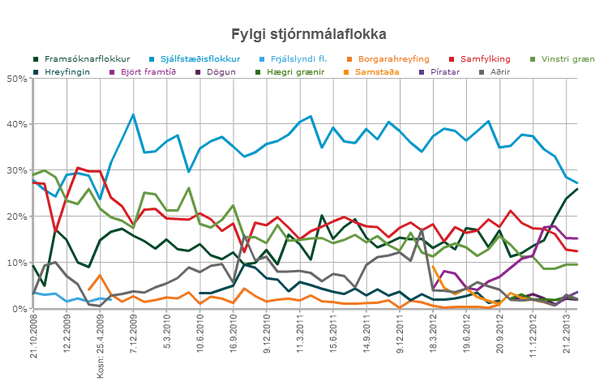 The results showed that the Independence Party is currently enjoying the lowest level of support since the last elections were held four years ago, just following the collapse that saw the party ousted from government. According to the poll hey would win 27.2% of votes if an election were held today. The Progressive Party would claim 25.9% of the vote, Bright Future would take 15.2%, the Social Democratic Alliance would receive 12.4% of votes, and 9.6% would vote for the Left-Green Movement.