Sonar Reykjavík at Harpa. I went there both nights. I had a fantastic time. These are some of my highlights.
Friday—Excitement
Ghostigital
The painful loudness at a Ghostigital show is always refreshing. These are guys who get it. In this kind of music, it isn’t just about the music. It is about the volume, too. It’s supposed to be felt with your whole body, and the term ‘pleasant’ isn’t a one sided word. Pleasure can be experienced through pain too. That being said, it should be noted that they’re not just loud; there are also textures and atmospheres that can only be achieved through a certain level of loudness. I’m consistently impressed with everything they do, apart from a few exceptions that they didn’t feature this time.
Sísí Ey
I loved the part where Elín played a melancholic song accompanied with a guitar (the only one I saw that weekend) but the magic was gone as soon as her sisters came on stage. Sure, Oculus did a good enough job shelling out some pumping house beats but other than that, there were three singers there with the same vocal range and style and no presence. By the time I started thinking about what else I might be missing I realised I had lost interest and left for greener pastures.
Diamond Version
If I were to make a list of bands that I’ve either
a) vaguely heard of without checking out, or
b) never heard of before
that have completely blown away by when I’ve seeing them live for the first time, the list would consist of about four items in total. The other three aren’t important right now, but Diamond Version are the latest member in this ridiculously specific list. Not for a moment, not a single second of their set was I bored or waiting for the next good part. I stood there in front of the mixer desk nailed to the floor and let the ultra bass heavy beat flow through me like a pulsating laser, hypnotized by visuals and five wave monitors. This was probably the best hour I’ve spent in years. Diamond Version is my new favourite band. Clinical and stiff, my ass. Don’t be such a grump, Vala!
Modeselektor
It was weird to transition from the angry bass pulverizing self-help messages of Diamond Version to the blissfully happy go lucky craziness and champagne guzzle of Modeselektor. They structure their beats to riffs that have strategic repetitions with bridges and choruses, rather than the usual metronomic bass drum punches. Of course they were present—it’s just refreshing to see a different kind of approach—and I was dancing my ass off when they all of a sudden dropped everything and started playing some dub that had no beat, no real texture and featured some pretty annoying vocals on playback, which always feels cheap. So I left. I bought some expensive beer in a plastic cup, and waited for GusGus.
GusGus
Some critics have pointed out that maybe Harpa isn’t a suitable venue for a festival such as Sónar. They say that it’s a bit too formal. I also heard some old school rave bangers complain that the sleekness of the architectural triumph that is our newly minted concert hall and conference centre, doesn’t really get them into the drug taking mode they were used to from before. “It used to be a standard that you’d pop a couple of Es and square of acid, just for starters, to get ready for LFO, Squarepusher and the like. Now I’d just feel rude doing that,” complained a father of three in his early thirties that had gotten a babysitter for the weekend to relive his glory days.
Personally, I liked being able to hang my coat up in the cloakroom and browse between venues without getting cold and wet. Then again, I missed out on the early ‘90s rave scene. However, being rude towards the sleek steel and glass design didn’t seem to be a problem for the usual GusGus crowd that appeared—as if by magic—in the line-up before the show, all red-eyed and chewing on their lips with shaved heads and neck tattoos scantily clad in their Skanks-R-Us finest.
The show itself was of course great, though. The set consisted of tracks from the masterpiece ‘Arabian Horse’, plus some pretty great new and unheard ones that I am excited to hear on plastic. At a show like this, in a venue like Silfurberg you can really understand why they won the Grapevine Music Awards for Best Live Act (http://grapevine.is/Features/ReadArticle/The-Grapevines-First-Ever-Music-Awards-Ever). From the first modular synth blasts they created an otherworldly atmosphere that is just as beautiful as it is dangerous and a little bit disturbing in a sexy kind of way.
What bothered me, though, were vocals on playback. There were some songs that originally feature the now absent Urður that they must have wanted to keep in the set, since a female voice is needed in some tracks. Still, if they already have two able and present singers, plus tons of equipment to play with the vocal pitches and whatnot, a vocal on playback just feels lazy and uncharacteristic for such a fantastic live band.
Saturday – Sombre but mad

Ólafur Arnalds
I had never seen Ólafur Arnalds play, so I decided to use this opportunity to do so. Also—like Ólafur called us out on, after his set—because it was a seated show, and I wanted to have a seat for the following act. With him on stage were a fantastic violinist and a cellist that added a nice touch to the dreamy neo-classical tunes. I liked it. I wasn’t blown away, but it has tension and hint of excitement entwined to the ethereal. The violin solo towards the end was great, and the off stage violin in “Lag fyrir Ömmu” was a beautiful and meaningful touch.

Alva Noto & Ryuichi Sakamoto
I felt so good that I nodded off. My wife had to give me a nudge a couple of times. I just couldn’t help it. Alva Noto’s textures and Sakamoto’s tender half-melodies just made me feel all warm and comfortable, like a recently fed baby in a cradle. I came to, though. Just a couple of nods. That’s all. I was fully aware when they did hints from “Merry Christmas Mr. Lawrence.” Great show.

James Blake
I’ve never given James Blake much notice. I felt like checking him out since I was still a bit drowsy from Noto & Sakamoto, and I knew he would be all soft and swooning after hearing “Limit to Your Love” over the airwaves from time to time. My favourite was the ultra low but powerful drone that swept through Silfurberg but otherwise I was bored to tears, so I walked out. “God damn, I always forget how fucking boring James Blake is,” the old school raver from last night exclaimed, already getting ready for LFO. “It’s so typical that his best song is a cover.” Which may be a bit harsh, I mean, the man has a beautiful voice.
Squarepusher
I did not want to miss Squarepusher, and I did not want to stand in a line of jacked up drum and bass heads, so I chilled out on a couch, interspersed with short trips to Gluteus Maximus (I enjoyed those brief visits and I’m glad the weight lifters got such a good workout on stage. It was something for everybody).
Squarepusher, the man with the bass, is a hero to many. Pigeonholing him in the drum and bass genre seems unfair. Not because he’s above it or anything, but since he’s more like a musician that uses elements from d&b every now and then. This show was breathtaking though. It was like watching someone splitting an atom. Every beat was fractionated into smaller parts and we all looked on in amazement, ignoring the fact that one false move and we would all be wiped out from the face of the planet. It was a noise show, if anything. A wonderfully cataclysmic noise show, and every single audience member was transfixed and hypnotised, watching listening feeling what might be the last thing we will ever experience.
Interestingly, the magic died a little when he finally took up the bass. As the mad scientist with a flashing helmet, he had complete control over our lives and future but—in comparison—downgraded into a novelty entertainer when picking up the bass. I’m no one to tell a renowned international musician and a genius how to build up a show, but I would have liked seeing him starting with the bass and building up from there. It is after all his signature, and that’s what most of us were waiting for. 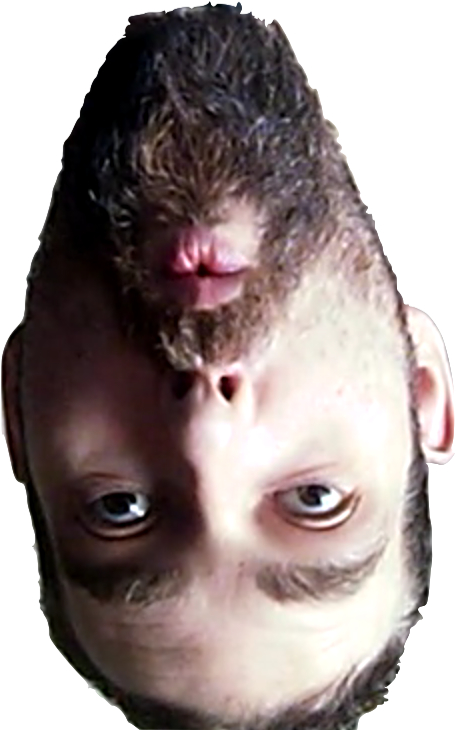 —
Aðalsteinn Jörundsson has the most facial hair of anyone who has ever
worked for the Grapevine. He writes, sells and talks on the phone. At a
certain angle, in a certain light, he looks just like a bearded drop of
water.