Words by
You Guys!
@rvkgrapevine

Sour grape of the month
A case of POLAR BEER for your thoughts.
We’re not gonna lie to you: we really love us some beers. Some folks would call it a problem, but beer never gave us any problems. In fact, over the years, it’s solved most of ’em. A frosty glass of cold, frothy, bubblicious, golden-tinted beer has consistently failed to let us down.
In the immortal words of Homer J. Simpson: “Mmm… Beer…”
Now, since we’re real pleasant and giving folks here at the Grapevine, we thought we’d share some of that wonderful POLAR BEER with you, our readers. Henceforth, until the end of days (or our Polar Beer-sponsorship program, whichever comes first), we will reward one MOST EXCELLENT LETTER with a case of the Polar Beer. You read right. A full case of beer. At your disposal.
Give us your worst: letters@grapevine.is 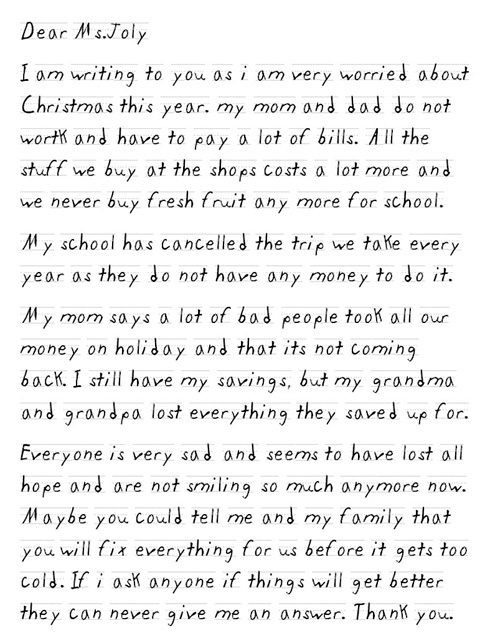 Dear nameless fictional melodramatic kid,
we appreciate your letter, as it brings attention to the plight of fictional melodramatic children all over Iceland. Possibly some real ones, too, although we do hope that’s not the case. Things are grim and all, but “fix everything for us before it gets too cold?” Sheesh. That’s pretty over the top. Are you eating coal for breakfast yet?
Anyway, here’s to you, kid, your drama and your ‘kid scrawl font’ letter.  You can have that case of beer. It will keep you warm until Ms. Joly fixes everything. Beer always helps.
And if things ever get so bad that we start seeing real versions of this letter, we will do our best to bring beer to all the cold children in Iceland. That’s a promise.
PS – If you’re reading this, Joly, we really wouldn’t mind you fixing everything, fake kid or not. You can have the fake kid’s beer if you do.

THE WORLD HAS IGNORED THE TRUE GOD.THEY HAVE IGNORED JESUS CHRIST.THEY HAVE CONTINUED DOING EVIL IN THE SIGHT OF THEIR GOD.GOD HAS NOW STIRRED HIMSELF TO START A SYSTEMATIC AND UNPARALLELED DESTRUCTION OF THE INHABITANTS OF THE WORLD.FROM NOW ON THE WORLD WILL  BE DESTROYED BY:-
1.EARTHQUAKES. 2.FLOODS
3.GIGANTIC HAIL STORMS. 4.WARS
5.WILD ANIMALS. 6.OLD AND NEW SICKNESSES. 7.FAMINE. 8.DROUGHT
9.POISONED AND/OR BLOODIED WATER. 10.STRANGE CREATURES FROM THE CORE OF THE EARTH. 11.FIRES. 12.STORMS. 13.FALLING STARS. 14.TORTURE. 15.MURDERS AND OTHER FORMS OF CRIME. 16.BLOOD. 17.E.T.C.
18.AFTER PHYSICAL DESTRUCTION, THEY WILL BE CAST INTO HELL AND/OR    LAKE OF FIRE AND BRIMSTONE WHERE THEY WILL BE BURNING FOR EVER AND EVER
GOD IS THE CREATOR OF ALL.HIS CREATION HAS REJECTED HIM.THEY WILL NOW SUFFER THE CONSEQUENCES
CHARLES MWANGI GACHICHIO & RAHAB WANJIKU MWANGI
(THE 2 END-TIME PROPHETS,THE 2 WITNESSES OF REVELATION 11:3)
Dear Charles and Rahab,
thank you for your warning. It really sucks that it has come to this, but we must admit; we are sorta curious to see these ‘STRANGE CREATURES FROM THE CORE OF THE EARTH’ type things. Are they Morlocks? Or in any way Morlock-like? That would be so cool. HG Wells is truly your brother in prophethood.
In any case, thanks for letting us know about all this. It means we can prepare properly for damnation. I have already started making a cool APOCALYPSE playlist. It has Nas on it. And some Lemonheads.

Dear Grapevine
I am a proud westfjordian, currently living in the capital of Iceland.
I, like normal people, like music, food, and all that normal people stuff.  Specially food, in fact I like food so much I’d die for a homemade hamburger.  But that’s not my point!
Let’s not talk about me, but more about my problem.  I, along 5 friends went to Indian Mango last month, a little restaurant downtown.  One of them was celebrating her 22 birthday.  And therefore we decided to go to this resturant.  We came there just around 8 pm, got our menus and just around 8:20 we ordered, nothing heavy that would make the chef sweat!
And then we waited…
and a bit more…
And then a couple came in, ordered, they waited for a few minutes and voilá! their food came, they eat, payed and left.
as we waited… and just around 9:40 ish the food finally came
The birthday-girl had seen a great part of her birthday go down the drain waiting for food, well, if that’s not fun, I don’t know what!
And the only thing that the restaurant did to say: “we’re sorry, sorry for ruining your birthday” was 10% discount(not of drinks, like beers and redwine to celebrate birthdays) and free coffey.
Well, I can say for sure that neither I, or my friends are ever going there again, I could understand this if there was crowdy in there, but no.  The truth is that there were us, and two other tabels.
And I hope that you will publish this, but if not…atleast it’s off my chest!
EVJ
Dear Evj,
jeez. You went to a restaurant and had to wait for an hour for your food. Did you read that imaginary kid letter? That kid is COLD. Compared to him, your plight really doesn’t sound that bad.
Also, you guys must be some seriously boring people, since sitting together at a table for an hour and twenty minutes – WITH ALCOHOL – was so goddamn awful.
But yeah, we feel your pain. Things often don’t go as one would wish them to. But you should cut the restaurant a little slack. Sometimes things just go wrong. I agree that a better discount would have been in order, since you clearly asked for it, but not everyone is a diplomat. Oh I don’t know. I hope you find a group of more exciting friends, if nothing else.
(by the way, Evj doesn’t sound like a particularly ‘Westfjordian’ name. At least in my neck of the fjords we’ve not heard of any Evjs. Are you sure you’re from there?)