Greater Beings In The Stars Will Be Frequent Guests

At the start of each New Year we are tempted to make predictions. Lemúrinn will make no such forecast for 2014 as we think it is generally a bad idea to predict much about the future.

Instead we will look at an old magazine article by the Icelandic scientist and astrobiologist Dr. Helgi Pjeturss (1872-1949). He studied natural science at the University of Copenhagen and became the first Icelander to graduate with a PhD in geology in 1905.

Dr. Pjeturss become a leading scientist in the complex and intriguing field of the secrets behind the fierce volcanism and geological history of Iceland. Around 1920, however, he became a somewhat curious figure when he began preaching his theories on psychic phenomena. He did not agree with the spiritualist movement that ghosts and spirits visited people in dreams. Instead he put forward a complex “astrobiological” theory positing that the universe was full of life and man was interconnected with beings on other planets, which we could visit in dreams. The Afterlife, he believed, would be spent on different planets. He was also interested in futurology and, in 1933, he made the following predictions about life in Iceland and the universe for the year 2000 and the 21st Century. 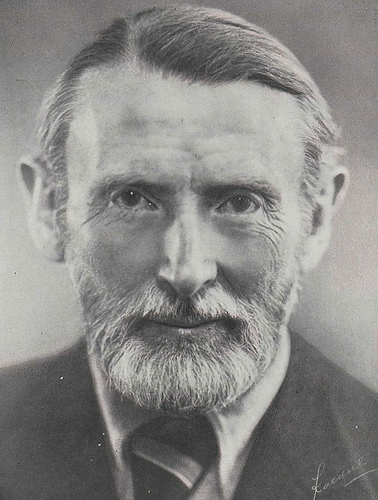 In the year 2000, mankind’s circumstances will be completely different from the way they are now. First and foremost, health and well-being will be greater than it is now, as people will be much better equipped to take advantage of that which improves life, be it love, light, or the fire and scent of the air (ozon). Each man will by then have a much greater chance of practicing the quest for physical and spiritual perfection.

There will be a great change in industry. No man will then have to spend his days breaking rocks in narrow mine tunnels and risking, as has been the case so frequently, being buried alive and suffering the most horrible of deaths. There will be no need to seek the sunshine underground – because we can say that coal is but ancient sunshine under a kind of spell, from which it is released when the coals burn. Men will by then know how to harness contemporary sunshine.  Agriculture will be widely practiced, but with radically different and modern techniques. We might call it `speed-agriculture’, and it will make use of rays we still know little about.

New types of fruits will be manufactured, much healthier and tastier than those, which we now know. But I am not saying that wheat and rye will be history, but then we will use those fine fruits to their fullest potential, taste- and health-wise. We still have ways to go before reaching that goal. There will absolutely be no raising of livestock only to slaughter.

And there will be much traveling. Everyone will have a chance to see much of the world. There will be no wars, no one will want to take on the inevitable consequences of maiming and killing. And all kinds of strife between parties and individuals will be much less frequent than now, as it will be easier to avoid contentious issues and come together. Disagreement on religion will be history, mostly.

Mankind will, through scientific  means, seek contact with greater beings in the stars, and such beings will even be frequent guests here on earth. Open-mindedness and prescience will shine as a kind of higher sunshine over all life. More and more, men will know what to expect from the future, and more and more, that which then comes as a surprise will be even better than expected. So that the old saying from Hávamál, many a thing goes worse than is looked for, will no longer hold true. And as I have written about earlier, there will be a great emphasis on dream-life, and sleep used to get to know life on other stars.

In the year 2000, Iceland will be one of the most fun countries on earth, and the weather will no longer be a hindrance to enjoying the beauty of its landscape to the fullest.

Lemúrinn is an Icelandic web magazine (Icelandic for the native primate of Madagascar). A winner of the 2012 Icelandic Web Awards, Lemurinn.is covers all things strange and interesting! Go check it out at www.lemurinn.is.