As it is for many hobbyists and collectors, it was inevitably a love of Star Wars that spurred Þröstur Höskuldsson to act on an ad in a local newspaper for a broken pinball machine. He bought it about six years ago while he was studying electrical engineering at Reykjavík University and thought it would make a nice home decoration.

“I have to admit,” he says, “I really didn’t play these pinball machines when I was younger. It was not until I saw this advertisement for a broken, Star Wars pinball machine that I—as a big Star Wars nerd—wanted to have it in my living room.”

He paid 100,000 ISK for it and spent a month refurbishing it and making it run. Then he started looking for more. Today, Þröstur owns 16 pinball machines, 13 of which he’s refurbished and brought back to life. Those 13 machines are just about all of the working pinball machines in Iceland and he keeps them in one of his three garages—two rented and one next to his house.

Since buying that first machine, he says he’s put a lot of ads in the papers and has asked around about machines. “I’ve actually called random people working in a bowling facility in Akranes to ask if they have any old machines or know about any, and I’ve had quite a bit of success with that,” he says.

The Death Of Pinball

Pinball was at its height in the mid 20th century and between 1955 and 1970 the pinball gaming industry made more money than the entire American movie industry according to an NPR report.

In his search for machines, Þröstur checked out the newspaper archives on tímarit.is and discovered Iceland’s rich pinball past. “I couldn’t believe how many machines used to be here—hundreds—and then most of these games just vanished.”

He hit the mother lode about three years ago when he found someone selling a container of 20 old arcade games in Akureyri. Most were pinball machines, the oldest of which was from 1977, but there were a few other games like Pac Man and Mortal Combat in the lot. All of them were deemed broken relics of the past that were pushed out by the advent of digital video games.

“There were three pinball machines in there that I really wanted: Indiana Jones, Adams Family and Star Wars. I pretty much bought the whole thing because I wanted those three machines,” he says.

He became as hooked on the challenge of refurbishing the arcade games as he had been with the pinball machines and luckily, by this point, Þröstur was working as a computer programmer.

“When I see these games like Mortal Combat and NBA Jam, I sort of want to give them a second life too. Maybe it runs in my family, my mother is sort of like this, she never wants to throw things away.” 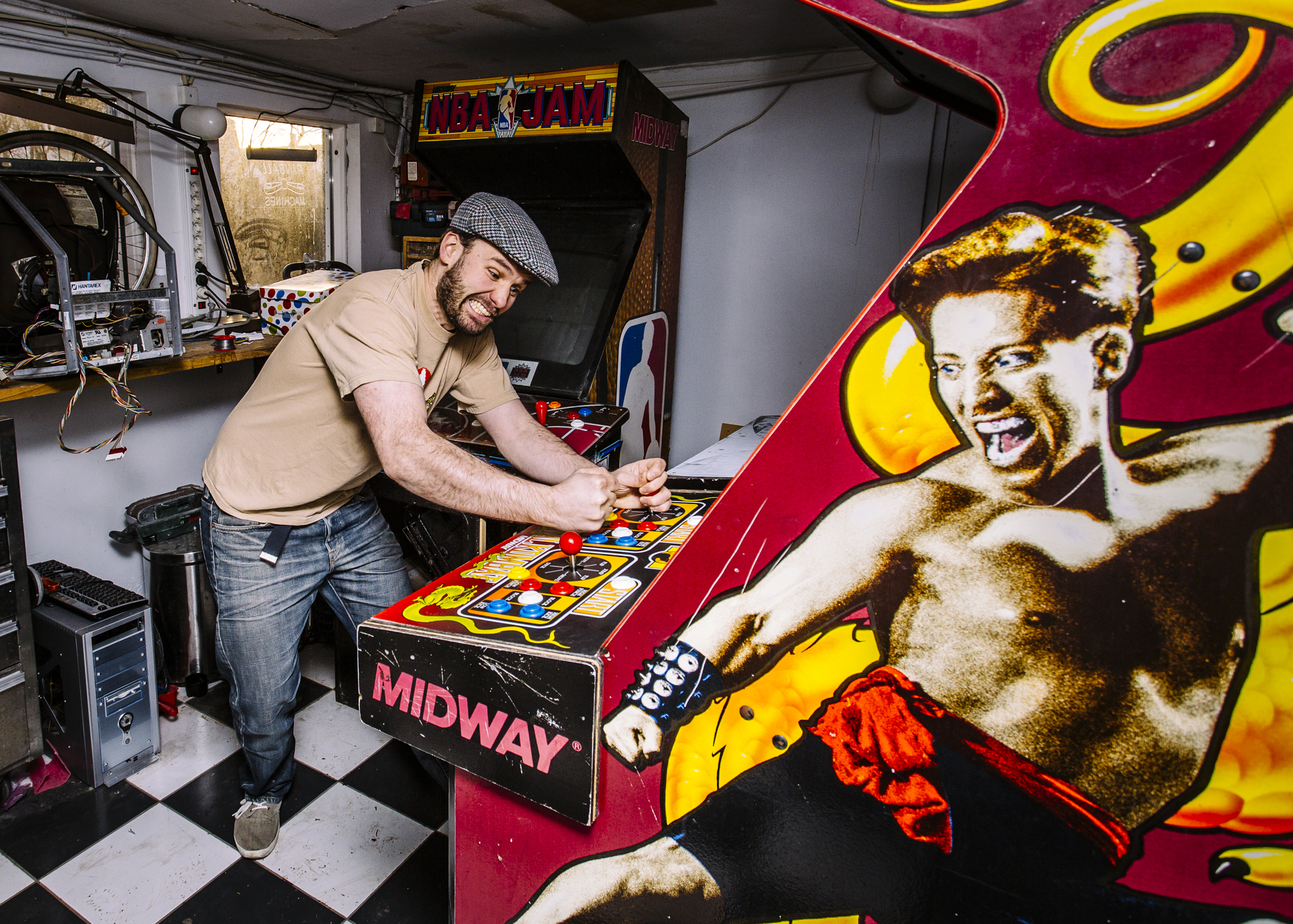 The Second Coming Of Pinball

He keeps four of his favourite pinball machines in a special room in his house and the Pac Man game and the Adams Family Pinball machine are camped in a second living room. His wife is cool with him keeping one work-in-progress in their house at a time and he’ll work on that one machine every other day, typically for about a month.

He buys many of the parts on eBay that come from old arcades or collectors in the US, Australia and the UK. One of his favourite pinball machines is a Guns N’ Roses game with two trigger pullies on each side: one is shaped like a gun and the other, a rose. But when he bought it, the rose was missing. After a month-long Internet search, he found a replacement rose piece in Australia.

“Some of these machines are getting more and more valuable, which is great. Hopefully, it will keep people from throwing them and the parts away,” he says.

Þröstur doesn’t spend a ton of time playing the games and more often than not, the ones in his house aren’t turned on. His kids are still too little to reach the handles let alone see the screen without a boost, though he says the machines are always being played on the kids’ birthdays. “They’re a cool thing to have around,” he says.

He also rents them out occasionally and recently had one pinball machine stationed at the CCP headquarters (the game company that makes the EVE online games) in Reykjavík. “The only problem is, they’re huge,” he says. Thus most of them stay at his home. He doesn’t get visitors to his house wanting to play, but he gets people interested in buying them for their own homes.

“I think now, most of these machines are in homes,” he says. “They’re not in much commercial use these days.”

“My dream for the future would be to make a mini-arcade. To open it up every now and then and let people play for free. It would be the perfect venue for Menningarnótt [Culture Night],” Þröstur says.

He’s been living in 101 for years and sees it as the part of town that could host a renaissance of pinball playing. If the one pinball machine at the bar Paloma is a sign, perhaps more will crop up at bars and cafes in Reykjavík.

He hasn’t sold any of his machines yet, but he’s reaching capacity on his collection and he knows he’ll have to begin selling some soon. “I actually tried to get permission to enlarge my garage, but I wasn’t successful,” he says.

Þröstur has yet to pass on any opportunity to buy a pinball machine, but he says he’s reaching that point. “I’m getting fat on them. I’ve realised that I have more than I need to keep up this hobby.”