The group Bárujárn is a strange beast indeed, a dark surf rock group with a twist; their tunes feature the rarely used, sci-fi sounding theremin. After a long hiatus, the band has finally released their self-titled debut LP, and we’re happy to say that it makes for an exciting listening experience. It starts with the sound of the ocean, before the twanging guitars chime in, underscored by low key theremin hiss. It’s like The Shadows with a darker shade of sunglasses playing in the nighttime on a black sanded Icelandic beach. Leader Sindri’s guitar playing on the album is excellent, and lyrics and songwriting are also top notch. Recommended.
Árni Rúnar Hlö›versson from the Reykjavík electro-pop band FM Belfast just released a new song, “Empire,” under his PlúsEinn moniker. Árni wrote, produced, performed, mixed and mastered the song himself at his home studio in Reykjavík. The song sounds a bit like a darker version of one of FM Belfast’s first singles, “Underwear,” in a really good way! Check out Árni on his Sound Cloud page, www.soundcloud.com-/plus-einn,- for more feisty tunes. “This is my empire, take it easy now.” This man is clearly in the empire business!
In other Árni related news, Árni Guðjónsson, Of Monsters and Men’s former keyboard player, has founded a new band called Blóðberg. The members of Blóðberg have been working on a EP last three months, which is slated for release this fall. Their first single, “Óskir” (“Wishes”) is currently streaming on their SoundCloud page. The music is of the ‘atmospheric dance-oriented elctro pop’ kind, and features a strong hook. 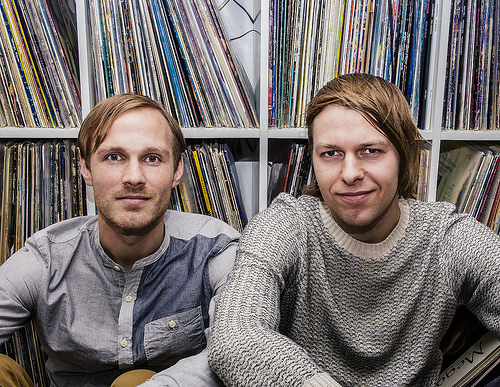 Straum.is has been active since last summer, with writers Óli Dóri and Davíð Roach documenting the local music scene and helping people discover the best new music. It is associated with the radio show Straumur on X977, which airs every Monday evening at 23:00.