“Hey, that group of kids look pretty fly on those Segways,” said NO ONE EVER. That is, until we took Jófríður Ákadóttir, Þórður Kári Steinþórsson, and Áslaug Rún Magnúsdóttir, the musical trio otherwise known as Samaris, out for a Monday afternoon Segway date. People gawked from across the harbour and lined the glass walls of Harpa to watch in awe as we swiftly weaved through the streets of 101 on our two-wheeled companions of cool. Cameras clicked as Áslaug extended her leg out behind the Segway with ballerina-like grace. Jófríður struck some mean poses against a backdrop of star-struck onlookers, and Þórður spun 360s like nobody’s business.
Okay, maybe we didn’t look as cool as we felt. And maybe the only cameras clicking were that of our hired photographer and Linda, the tour guide. Regardless of how foolish the scene may have appeared, Samaris were total troopers. We couldn’t have booked better attitudes for the ego-crushing activity. Besides, it’s hard not to smile on a Segway.
Full steam ahead
As we approached Sway, the Segway tour company, I admitted that I had no idea what was in store, half-apologising for putting them in this position and half-thanking them for coming along so willingly. “Yeah, it’s no problem,” Jófríður remarked, “you have to put yourself in these situations every once in a while.” I agreed and was relieved that their rapid rise to popularity hadn’t yet crumbled their sense of humility.
Samaris materialised just two years ago in 2011, when Áslaug approached ﬁór›ur in the school hallway and pitched the idea of forming a musical group. “We thought maybe we could play some shows at a bar or something” Þórður said. “We didn’t set out to make a record or anything. We just wanted to try something new and weird” Jófríður elaborated. The first gig they scored as a group was Músíktilraunir, the Icelandic ‘Battle of the Bands.’ They entered with only two songs completed (bands that make it to the final round have to play three), and won.
With their 2011 victory, Samaris joined the ranks of past winners that include Botnle›ja, XXX Rottweiler hundar, Mammút, Agent Fresco, and in the year preceding them, Of Monsters and Men. “We sort of got to skip the ‘struggling artists’ part,” they said, laughing. “When you win Músíktilraunir, they kind of just throw you into the deep end,” Þórður said.
Keeping their cool
Since then, Samaris have signed with One Little Indian Records, released two EPs and a debut album, toured Europe, played at Iceland Airwaves, and graduated high school. “It all happened so quickly,” Áslaug tells me. “It started as a joke, as a fun project.” This playfulness is reflected in the way that they dance shamelessly on their Segways around Harpa’s front patio. At one point, while posing for a photo, Jófríður’s Segway goes horizontal, smacking ﬁór›ur before hitting the ground. She jumps off in shock and they burst into a fountain of laughter.
Signing with a record label has relieved them of boring responsibilities like sending emails, but has added others to the mix. “They have all these big plans for us, world tours and things—so we have to try really hard to stay grounded. If you know what you want it’s easy to go for it. But if you don’t know, it’s really easy to let things get out of control. We’re so young, you know, we don’t even know what we want yet; how can they!” They laugh, but it’s sincere. 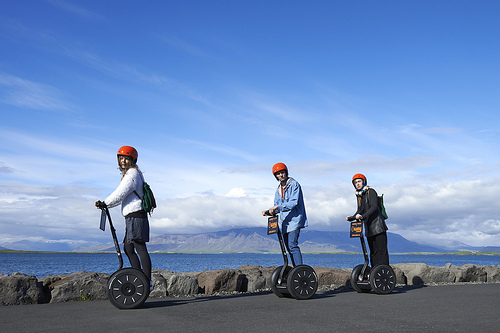 The swing of things
Summer vacation has a whole different meaning to a twenty-year-old being offered record contracts and world tours, but it doesn’t seem to faze the group too much. They’re getting their kicks too. At one point I mention my excitement about attending LungA in the middle of July. Jófríður exhibits equal excitement, and then a little dismay. “Yeah I’ll be there! I have to figure out how I’m getting there though,” she says, “we’re playing at Extreme Chill Festival up until the start of LungA, and that’s all the way on the West side of Iceland. I have to get alll the wayyy across,” she says, arching her pointer finger across an invisible map of Iceland. Extreme Chill is just one in a long slur of shows that they let out when I ask about the rest of their summer plans. In an overlapping fashion they begin pinning and pointing all over the invisible Iceland.
Come September Jófríður plans on attending Háskóli Íslands, pursuing a degree in computer science. Áslaug is taking a three-month travelling hiatus, beginning in Moscow and ending, well, she doesn’t quite know. And Þórður, he’ll be “hanging out in the cafés, drinking coffee and smoking cigarettes,” the girls say, teasing him. But there’s very little “down” in their respective downtimes. I ask them if they’ll be taking a break while Áslaug is away. “No, no, no, no,” Jófríður said insistently. “Þórður and I are going to continue to meet and work on our music, so when she comes back we can keep moving.” They’ve already recorded a second record, which they hope to release early next year. 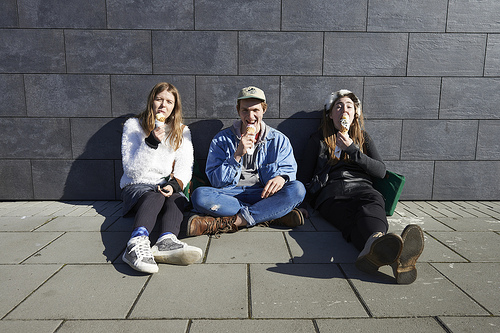 Dairy free deconstruction
We arrive in a single-file formation back at Sway and neatly line up our vehicles against the building. Bright orange helmets are shed to reveal wind-whipped tangles and replaced on the orderly safety shelf. Jófríður suggests grabbing a waffle cone around the corner at Valdís, one of Reykjavík’s newest and finest ice cream shops. She is excited because they serve vegan ice cream. “You’re vegan?” I ask. “Kind of” she replies.
In light of the recent un-development of music venues around Reykjavík, I am curious about the band’s favourite places to play. “Harpa is nice, and Volta has a great sound system,” Jófríður said between licks of Apelsín sorbet. “Hemmi og Valdi was a favourite, really small and intimate.” Dissatisfied by their apathy toward Hemmi’s closure I start to prod, “what about Faktorý?” They see where I’m going with this and just laugh. “We’ve played Faktorý too many times, we’re sick of it.” They’re not unsympathetic. They just have a different take. “It’s sad that they’re closing these places, but there will be more,” Þórður explained, “it will definitely be weird for a while, but then something else will take its place. Who knows, it could be some really cool, obscure new venue. You never know. People need to be more optimistic.”
Just another day in the life
When all that’s left of our devoured cones are the napkins they were wrapped in, we unpeel ourselves from our claimed stretch of sidewalk and begin strolling back toward 101. Þórður’s phone rings and after a quick exchange in Icelandic he hands the phone to Áslaug, “It’s your mom.” Áslaug holds a concise mother-daughter exchange, hangs up and mounts her bike. “Dinner’s ready!” she says. “We’re having soup.” With that they divide and conquer their respective corners of Reykjavík. Jófríður gets a phone call and moments later a white car pulls up across the road to retrieve her. Þórður heads back to the studio where he had emerged from earlier in the day to come Segway, and Áslaug rides home toward her patient bowl of soup.