Having just finished a conference call with the executive directors of UNICEF, Sigríður Víðis Jónsdóttir is relieved to hear good news from Syria – a weekly report shows that emergency supplies for women and children have reached bombarded Aleppo and Homs in Syria. After two years of brutal civil war, the infrastructure of the country has crumbled and access to basic services has been crippled. Sigríður is the communication director of UNICEF Iceland, and is responsible for raising awareness of the emergency relief efforts in Syria.

Sigríður, who has a background in journalism and a master’s degree in, governance and international development from University of East Anglia, first travelled to Syria in 2009 during a time of peace. At the time, she was working on her book ‘Ríkisfang: Ekkert’ (“Citizenship: None”), about Iraqi refugees who were granted asylum in Akranes, Iceland. The easiest way into Iraq was the land route through Syria, and Sigríður had heard a lot of good things about Syria. “I got myself a room in the old parts of Damascus, by the centuries’ old city walls,” she says.

The war in Iraq was then in full swing and Syria was accepting refugees with open arms. They too rented rooms in Damascus or lived with relatives. Most of them were waiting to go back home, others were building a new one in Syria.

When she returned to Iceland, Sigríður recommended visiting this beautiful paradise to all of her friends. “It seemed inevitable that it would experience the same boom in tourism that Iceland has seen,” she says, “the culture was accessible and profound, and the people very generous. I have lived in other places for longer periods of time without being so deeply moved.”

Trading the handshake for the fist

The Arab Spring swept through Syria in 2011 where a series of protests erupted into a full-blown civil war. Many were forced to rely on their neighbouring countries’ hospitality, with an estimated 1.5 million Syrians now living as refugees in Lebanon, Jordan, Iraq and Turkey, according to the UN Refugee Agency.

Sigríður says certain societal changes had been on Syrians’ minds when she was there, changes that might upset the status quo. “It is only natural that people come forward to work towards a fairer society, but what surprised me was that the protesters were met with extreme measures when what they were after was a dialogue.”

The cost of the conflict has been great, both in human lives and ancient treasures. “I travelled to Aleppo in the North and saw the historic old market and the citadel,” Sigríður says of her former visit. “They were on the UNESCO World Heritage list, but have now been seriously damaged by the war. It is incredibly depressing.” In fact, all six of Syria’s heritage sites have been damaged or destroyed, including the crusader castle ‘Krak des Chevaliers.’

Syria is constantly on Sigríður’s mind, and she feels ill hearing about explosions or fighting in areas she knows intimately.“The solution,” Sigríður says, “is for all political leaders that can influence the situation to commit to do so.”

Until then, she finds some solace in the stalwart aid work of UNICEF and other charities. “Help is steadily reaching more Syrians,” she says. “Although the efforts of a single person can only go so far, I believe each person has a moral duty to help others in need. And people can do just that by donating money to charities involved, or spreading the word on social media sites; every little bit helps.” Icelanders have also been responsive to UNICEF’s emergency appeal for Syria, Sigríður says. “They seem to understand that their contributions count. Each month 22,000 Icelanders also donate to UNICEF, and a fixed part of that sum goes to our emergency work.”

“Why not tackle domestic and foreign aid simultaneously?” Sigríður replies. “UNICEF, for example has done a lot of work for children in Iceland, at the same time as saving children’s lives abroad. For just 6,000 ISK we can provide 107 sachets of therapeutic food for malnourished children, 167 vaccinations, or 80 notebooks and pencils for children in need. That’s a lot.”
It goes without saying that it would be difficult to do as much good for that amount of money in Iceland.

In emergency situations like Syria, Sigríður says children are always the most vulnerable. “We have mobile medical teams that perform life-saving operations, but children need more than just food and medication,” Sigríður says. Schools get destroyed or shut down because of fighting, but once they reopen it is vital that children start going back. “Not only does it give them an education, but also a routine and something to look forward to.”

Syria has been transformed from what Sigríður remembers, but she says she still wants to revisit it. “The war is terrible, but what people forget,” she says, “is that life still goes on. People still wake up, go about their day and fall asleep. One day this conflict will come to an end.” 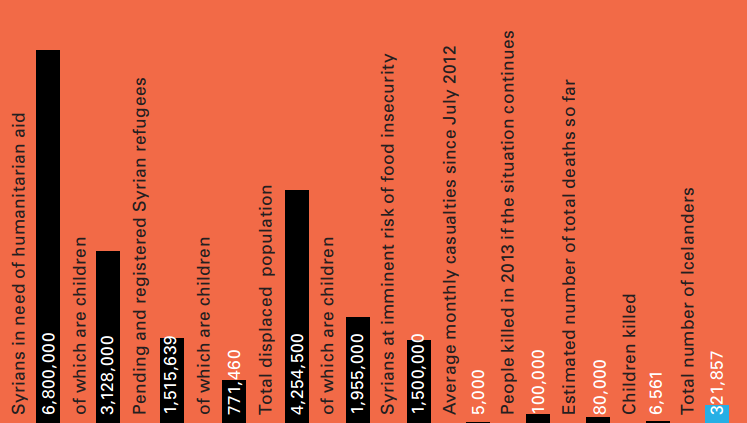