Tourism, it need hardly be pointed out, is big business in Iceland, an industry which in the years following the crash has ballooned, with more than double the country’s population visiting last year. But while making it into the New York Times would normally be good news for Iceland’s economy, a recent entry about Iceland’s highlands on the publication’s “52 Places to Visit in 2014” list was less than ideal from a publicity standpoint.

The paragraph-long blurb did mention the area’s unique landscape, but its key takeaway was that the “famously raw natural beauty” of the highlands—and more specifically, the Þjórsárver wetlands located in the interior—may not be enjoyable by anyone, let alone tourists, for much longer. As reads the article’s subtitle: “Natural wonders are in danger. Go see them before it’s too late.”

The suggested threat facing the integrity of Þjórsárver? Not impending volcanic eruptions or natural deterioration. Rather, the article stated that the Icelandic government recently “announced plans to revoke those protections” which had been safeguarding the wetlands, and additionally, that “a law intending to further repeal conservation efforts has been put forward.”

The “52 Places” article was widely quoted within the Icelandic media. Within days of its publication, the Ministry for the Environment and Natural Resources issued a brief statement in Icelandic bearing the title “Incorrect Reporting by the New York Times.” It claimed that the New York Times article was “full of misrepresentations” and was “paradoxical and wrong.” The author of the article, contributing travel writer Danielle Pergament, was not contacted in regard to any “misrepresentations,” and neither was the New York Times—although the latter was invited to send a reporter to an open Environment and Communications Committee meeting on Þjórsárver a few days after the article’s publication.

So what exactly caused all the kerfuffle? Did The New York Times get it all wrong?

Before we address the “incorrect reporting” alleged by the Ministry of the Environment, it will be useful to step back and explain a little of the context surrounding the Þjórsárver Wetlands and the battles which have been waged over this area since the 1960s.

Located in Iceland’s interior, the Þjórsárver wetlands stretch 120 square kilometres from the Hofsjökull glacier in the northern highlands to surrounding volcanic deserts and are characterized by remarkable biodiversity. A description on the World Wildlife Fund website points not only to the variance of the landscape itself—“tundra meadows intersected with numerous glacial and spring-fed streams, a large number of pools, ponds, lakes and marshes, and rare permafrost mounds”—but also to the area’s unique plant and birdlife, including one of the largest breeding colonies of Pink-footed Geese in the world.
Þjórsárver is fed by Iceland’s longest river, Þjórsá, which also sources much of the country’s electricity. Since the early 1960s, Landsvirkjun, the National Power Company of Iceland, has proposed several plans for creating a reservoir on Þjórsá that would facilitate increased energy production and enlarge energy reserves. Such reserves would not only be useful for existing industries, such as aluminium smelting, but—following the proposed creation of a submarine cable to Europe—could also be sold as part of foreign energy contracts as early as 2020.

Through the years, Landsvirkjun’s proposals have been met with frequent opposition, which in 1981 led to a nature preserve being created in the Þjórsárver wetlands. However, a provision was made within these protections, allowing Landsvirkjun to create a future reservoir, provided that the company could prove that the wetlands would not be irrevocably harmed, and that the Environment Agency of Iceland approved the reservoir plans.

By the late ‘90s, there was another flurry of activity: in 1997, the Iceland Nature Conservation Association (INCA) was founded with the “primary objective” of “establish[ing] a national park in the highlands.” Two years later, the government began work on an extensive “Master Plan for Hydro and Geothermal Energy Resources.” Divided into two phases that spanned from 1999 -2010, the Master Plan was intended to evaluate close to 60 hydro and geothermal development options, assessing them for environmental impact, employment and regional development possibilities, efficiency, and profitability.

Over the course of the Master Plan’s two phases, it was decided that the nature preserve established in the Þjórsárver Wetlands was to be expanded and designated as a “protected area.” The new boundaries were to be signed into regulation based on the Nature Conservation Act in June 2013 (the resolution was passed by parliament that year according to the Master Plan), until the Minister of the Environment, Sigurður Ingi Jóhannsson, elected to postpone making them official in order to consider a new reservoir proposal from Landsvirkjun.

Based on this new proposal, Sigurður Ingi has drawn up new boundaries for the protected area, which would expand the original nature reservoir, but cover less area than the original boundaries created by the Environment Agency of Iceland. The new suggested boundaries do not extend as far down the Þjórsá river, and therefore would allow Landsvirkjun to build their Norðlingalda Reservoir. Conservationists who oppose this point out that the three-tiered Dynkur waterfall will be destroyed if Landsvirkjun’s reservoir plans go through. 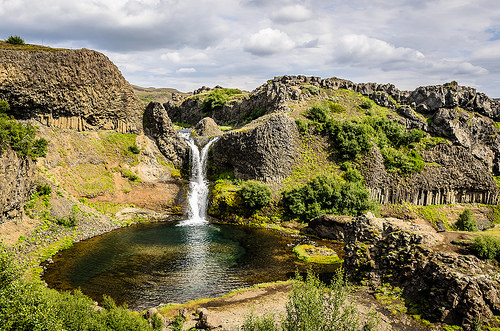 This brings us back the alleged “misrepresentations” in the New York Times write-up. Best to go through the Ministry of the Environment’s statement and address their qualms one by one:

“The article in question is full of misrepresentations about Þjórsárver preserve and the government’s intentions regarding its protection and utilisation. For instance, it states that Þjórsárver covers 40% of Iceland, while in fact, it only covers .5% of the country today.”

The first version of the article, since corrected, read as though the Þjórsárver wetlands constituted 40% of Iceland. In reality, it is the highlands that constitute 40% of Iceland’s landmass, and Þjórsárver is only part of this area. Following a call from Árni Finnsson, the chair of INCA who was quoted in the piece, this error was corrected.

“There are no plans to lift the protections currently in place. On the contrary, the Environment and Natural Resources Minister aims to expand the protected area and if that plan goes through, it’ll be an expansion of about 1,500 square kilometers, or about 1.5 % of the total area of Iceland.”

It is true that Minister of the Environment Sigurður Ingi Jóhannsson has not suggested that the current protections—namely, the preserve that was established in the ‘80s—be altered. Nevertheless, it is also misleading to suggest that he personally “aims to expand the protected area,” as the expansion plans were basically mandated by the findings of the Master Plan. Moreover, he elected not to approve the Environment Agency’s expanded boundaries, but rather to propose new boundaries which would create a smaller protected area than was intended.

So no, Sigurður Ingi is not cutting back on “current protections,” but that’s only because he refused to approve the protections that were supposed to be in place already.

“Therefore, it is clear that there will be a substantial expansion of the protected area under discussion. The New York Times asserting that protections on Þjórsárver will be lifted in order to enable hydroelectric power development is both paradoxical and wrong.”

What we’re seeing the Ministry of the Environment do here is a neat little bit of semantic parsing. The NYT article states that after spending decades protecting the wetlands, “the government announced plans to revoke protections, allowing for the construction of hydropower plants.” This is a carefully qualified statement, and might accurately refer to any of several ministerial initiatives, from Sigurður Ingi’s redrawing of the Þjórsárver protected area boundaries, to his recent proposal to repeal the law on nature conservation (60/2013). This law was approved by Alþingi and was set to go into effect on April 1, 2014. It included specific protections for natural phenomena, such as lava formations and wetlands. In November, Sigurður Ingi introduced a bill to repeal the nature conservation law, although this has yet to be voted on by parliament.

So, no, the New York Times article was not “paradoxical and wrong.” It was, unfortunately, quite correct.

Although debates over Þjórsárver and development proposals in the Icelandic highlands have been well covered and discussed in detail by the Icelandic media, conservation issues around this area have not, thus far, made many headlines internationally. So it is noteworthy that an outlet such as The New York Times chose to highlight these issues on a more prominent stage, especially given that Iceland’s breathtaking landscapes are often a driving force supporting its tourism industry. As Árni Finnsson wonders, “Who goes to Iceland to see power plants and power lines?”

While an over-saturation of tourists in fragile natural environments can pose its own, very real, threat to nature reserves and natural sites like Þjórsárver, tourism can still have a positive influence on conservation issues, such as, Árni recalls, when a greater interest in whale watching led to more effective challenges to Icelandic whaling. “It takes many millions to recover a loss of reputation,” says Árni Finnsson, speaking about Iceland’s image as a country whose nature is its biggest selling point. “It’s a huge resource, but it is so easy to destroy it.”

It was, in fact, specifically the threat of development that made this particular site stand out to Danielle Pergament. “I think people—over here [in the US] anyway—are well aware of the natural beauty in Iceland. But not many people know that the wetlands are under threat, that there is a chance that the famous landscape may be developed. I was shocked to learn about it myself. That is why I wanted to write about it.”
The question remains, however, if the attention drawn to Þjórsárver’s tenuous position will actually generate much new support. After all, in declining to publicly “correct” the New York Times, the Ministry effectively contained the debate to an Icelandic-speaking audience here in Iceland. And anyway, even if thousands of tourists become suddenly impassioned by the cause of the Icelandic wetlands, the area may remain inaccessible to many of them. “The Þjórsárver wetlands are like an El Dorado, a land beyond,” says Árni Finnsson. “They aren’t really suitable for tourism, or not for many tourists, at least. Maybe a few very keen, very well-trained hikers.”

At the end of the day, then, if the choice is made to protect Þjórsárver, it will have to be for less tangible reasons than the possible dollars generated by tourists, or international pressure. It has to come from within.
But first, let’s get the facts straight.

Minister Of Environment Would Support Sacrificing Waterfalls For Reservoir
Proceeding With Caution (Svandís Svavarsdóttir, member of the Left Green Party, on the balance beween the nature’s value for the energy industry or tourism and its categorial value)
Peaceful Environmental Protest Following Arrest