On Top Of The World

Wherever, and pretty much whenever, you look around the world, things appear to be in a pretty constant state of falling-apartness, and here in Iceland, there are problems like anywhere else. Nevertheless, in spite of the difficulties of recent years, we (that’s the Global ‘We’) may actually be on an upswing, happiness-wise. According to the 2013 World Happiness Report (WHR) published by the UN’s Sustainable Development Solutions Network, “despite the obvious detrimental happiness impacts of the 2007 – 2008 financial crisis, the world has become a happier, and more generous place.”

If Iceland’s WHR ranking is any indication, this assessment seems to be true. In the report’s first year (2012), Iceland was ranked 20th in happiness worldwide. This year, however, we’ve leapt up the charts and are now part of the big ten, ranked as the world’s 9th happiest country. Another recent happiness report, issued by the European Commission’s Eurobarometer in 2012, ranked Iceland as the second happiest country in the world, with satisfaction and well-being levels roughly equivalent to those before the crash. But wait a minute, you’re thinking: the economy is still in shambles, the capital controls are still in place, and purchasing power in Iceland continues to decrease. Shouldn’t everyone be miserable?

The income level of a nation’s inhabitants, as measured by the country’s Gross Domestic Product, was once treated as shorthand for peoples’ overall well-being. In 2009, however, a panel commissioned by French President Nicolas Sarkozy and led by the Nobel-prize winning economists Joseph E. Stiglitz and Amartya Sen resolutely determined that GDP has significant limitations as a measure of both social and economic well-being. Their findings stressed the importance of “get[ting] away from GDP fetishism” and instead seeking alternative measures of “sustainability and human well-being.”

Since the early 1970s, the Himalayan nation of Bhutan has countered the concept of Gross Domestic Product with that of Gross National Happiness and has developed a sophisticated survey (with four pillars, nine domains, and 72 happiness indicators) to measure the Bhutanese people’s happiness. The survey “was primarily devised to provide policy guidance to increase happiness” because, “people who are not-yet-happy are an important policy priority.”

In 2011, the United Nations passed a Bhutan-sponsored resolution which stated that “happiness is a fundamental human goal and universal aspiration; that GDP by its nature does not reflect the goal; that unsustainable patterns of production and consumption impede sustainable development; and that a more inclusive, equitable and balanced approach is needed to promote sustainability, eradicate poverty, and enhance well-being and profound happiness.” In order to act on this resolution, however, a substantive data set was needed. Enter the first World Happiness Report in 2012.

Okay, but how exactly are these WHR rankings determined? The answer is complicated. The World Happiness Report (WHR) distils happiness down to six fundamental criteria: GDP per capita (yes, it’s still used), years of healthy life expectancy, social support, perceptions of corruption within society, the prevalence of generosity, and the freedom to make life choices. The WHR—like many other well-being indices—primarily relies on Gallup World Poll data, which itself is subject to the interpretations of the Cantril Self-Anchoring Scale.

The Cantril scale is a well-being assessment that asks individuals to imagine a ten-step ladder on which the top rung (10) is their best possible life, and the bottom rung (0) is their worst possible life. Survey respondents are then asked to report which rung they believe they are currently standing on, and which rung they will be standing on in five years. (Interestingly, according to Gallup’s own methodological explanations, “research…indicates substantial correlations between the Cantril Scale and income. This contrasts with measures of feelings or affect which appear to be more closely correlated with variables such as social time.”)

In addition to these Cantril assessments, the WHR also weights its rankings with “measures of positive emotions (positive affect) including happiness, usually asked about the day preceding the survey; measures of negative emotions (negative affect) again asked about the preceding day; and evaluations of life as a whole.” In this way, the rankings are meant to accurately reflect the complexity of happiness: both as a transient emotional feeling, and as a standing social evaluation.

Any attempt to try to quantify the happiness, well-being, or overall satisfaction of an entire nation will necessarily be somewhat biased and limited. For instance, the current WHR parameters still include GDP, but don’t take into account the satisfaction or inner-peace that a citizenry might take from their local environment. (It seems reasonable to assume that many Icelanders would give Icelandic nature at least some credit for their quality of life.)

But the essential point—the idea that a government would regularly assess the happiness of its people and then actively work to improve the lives of those who are, as the Bhutanese say, “not-yet-happy”—is a powerful one. The WHR admits to being “highly subjective,” and admits that well-being is “not a cure-all. Happy people do get sick and lose friends. Not all happy people are productive workers…” But as subjective bases for public policy go, you could certainly do worse. Mightn’t we all stand to benefit from more happiness-improving legislation? According to the King of Bhutan, increasing his peoples’ happiness is a real governmental responsibility: “[T]he duty of our government must be to ensure that these invaluable elements contributing to the happiness and well-being of our people are nurtured and protected. Our government must be human.” 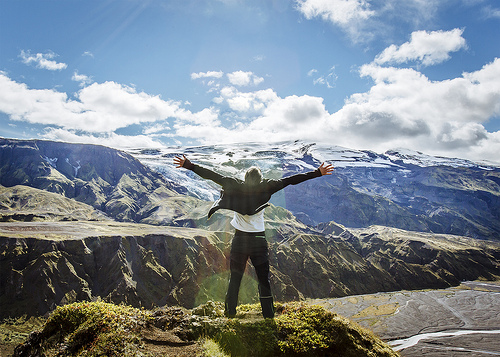 Gender Equality: Iceland has been the world’s most gender-equal country for four years in a row and “has closed almost 73% of its gender gap,” according to the World Economic Forum’s Gender Gap Report (GGR). The 135 countries surveyed in the report were rated on how successful they have been at eradicating gender-based inequalities in the areas of economic participation and opportunity, educational attainment, health and survival, and political empowerment. The report indicates that there is still room for improvement in Iceland and other Nordic countries’ gender equity (for instance, “salary gaps between men and women are among the lowest in the world, although not non-existent”), but points out many ways in which the Nordics have successfully supported both genders in society: “abundant opportunities to rise to positions of leadership,” a balance of childcare labour responsibilities in the home, mandatory paternal leave, and social insurance funds.

Peacefulness: Iceland is the world’s most peaceful country according to the 2013 Global Peace Index (GPI) published by the Institute for Economics and Peace. “The island nation is free from conflict,” reads the report summary. “Crime and homicide rates are minimal and the jailed population is considerably lower than elsewhere in Europe and among the smallest proportions in the world.” Iceland also scored high in the GPI for its few policemen (661 in the whole country as of 2010), the low perception of criminality in Icelandic society, the country’s lack of an army, and (rather contradictorily), for its cooperation in peacekeeping missions in Afghanistan, Lebanon, Palestine, and the Balkans.

Safety and Security: In its survey of 142 countries, the 2012 Legatum Prosperity Index rated Iceland as the safest and most secure country in the world, with 81.1% of respondents confirming that they “feel safe walking alone at night.”

Well-being of the Elderly: Iceland is ranked 9 (of 91 countries) when considering the well-being of people 60 and older, according to the 2013 Global AgeWatch Index (AWI). This ranking is based on four categories: income security, health status, employment and education, and an enabling environment. According to data collected by the World Health Organization, Icelanders continue to have some of the longest life expectancies in the world (81 for men, 84 for women) and the AWI predicts that the country’s population over the age of 60 will continue to grow in the future. As of 2012, the AWI shows that 17.5% of Iceland’s population was aged 60 or over. This percentage is expected to increase to 24.4% by 2030 and 28.8% by 2050.

Economic Competitiveness: In its Global Competitiveness Report for 2013–2014, the World Economic Forum ranked Iceland 31 out of 148. “Despite significant difficulties in recent years,” reads the report, “Iceland continues to benefit from a number of clear competitive strengths.” These include Iceland’s “top-notch educational system,” and an innovative business sector which successfully adopts new technology.

Prosperity: The 2012 Prosperity Index (LPI) published by the Legatam Institute, a non-partisan public policy organisation, rates Iceland 15 out of 142 when considering eight different categories ranging from the economy and entrepreneurship to personal freedom and social capital. A few representative statistics from the report include: 90.8% of Icelanders surveyed reported that they were satisfied with beauty of the environment; 47.1% said they had helped a stranger recently; 97.7% said they could rely on a friend or family member for help. At the same time, 60.9% of respondents they believed businesses and government agencies were corrupt, and only 25.9% had confidence in the national government.

The Economy: When analysing more specific aspects of the country’s economic growth potential, Iceland was ranked far lower on the Global Competitiveness Scale. It ranked 118 out of 148 when considering its macroeconomic environment; its financial markets were ranked 80. Meanwhile, the Prosperity Index gives Iceland’s overall economy a ranking of 61 out of 142.