The Wrong Kind Of Whale Watching

“How mentally prepared for this should we be?” I asked our driver, Marvin Lee Dupree, as we approached the turn-off to Hvalfjörður. Marvin paused, made a pensive sneer and replied. “It’s pretty gnarly.”
On Friday, August 2, we received a call to our office from known activist Sigursteinn Másson inviting us along to an anti-whale hunting protest set up by the International Fund for Animal Welfare (IFAW). The whaling ships Hvalur 8 and Hvalur 9 had reportedly caught two fin whales, despite having no current buyer for the meat or any means of shipping it through other countries, and were dragging them into the fjord to the whaling station. A few of us at Grapevine decided to go along.
Into the fjord
Approaching the mouth of the fjord, we noticed two boats tailing each other towards the whaling station, and Marvin sped up the car. “I want us to be ready for them when they get there,” he said, referring to the protestors. Finally he pulled off the road and parked in front of a chain link fence, next to several other vehicles. “This is kind of a community event. People in the area come out to see this.”
A few steps past the other cars I looked down to the right at what appeared to be the lower-half of a fin whale laid out on an open concrete dock, sawed clean through at the midsection and splayed open lengthwise, exposing muscle, entrails and the spine. About a dozen male workers in waterproof coveralls walked around and on the carcass using chainsaws and large straight hooks to cut off pieces of flesh, meat and bone, and then drag them over to various areas of the work-dock, seemingly dependent on where the parts were headed to next. 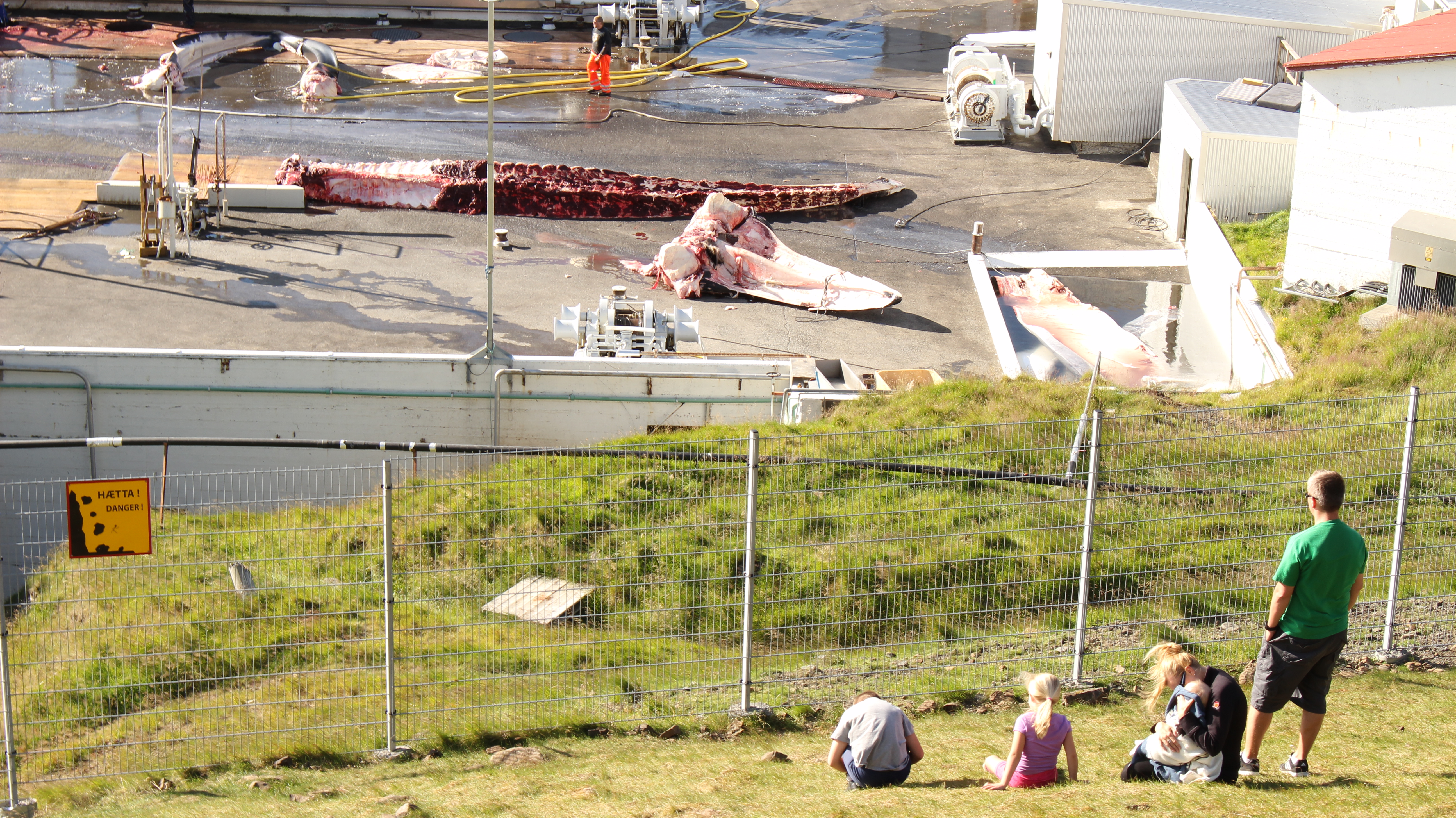 Mechanical animals
Large automatic pulleys were installed on the work-dock and a hook-line was drawn from the back-end pulley, attached to the skin of the whale—which had already been loosened by the workers—and then stripped off the carcass in one mechanical motion. As the workers finished removing the skin and dragged it into a container full of (presumably) water at the back of the dock, a second whale was being dragged through the open water up to the dock.
One worker walked around with a large mop pushing waves of blood back towards the sea, which was already full of crimson pools. The work was done quickly to the point of appearing sloppy, with seemingly little attention paid to hygiene. The work-dock and carcass were not hosed off during the carving and workers wantonly switched between walking on the ground and on the spine. The place emanated an acrid smell, similar to the metallic salty taste of putting an old key in your mouth.
Masses of birds flocked onto the whale as it was dragged through the open water, pecking at it and getting their fill. Once the second whale reached the edge of the dock, it stayed bobbing in the water for several minutes while a group of about eight people stood down at the edge looking at it from up close. Marvin later said that these were most likely people invested in whale hunting in some way, be it monetarily, politically or personally. 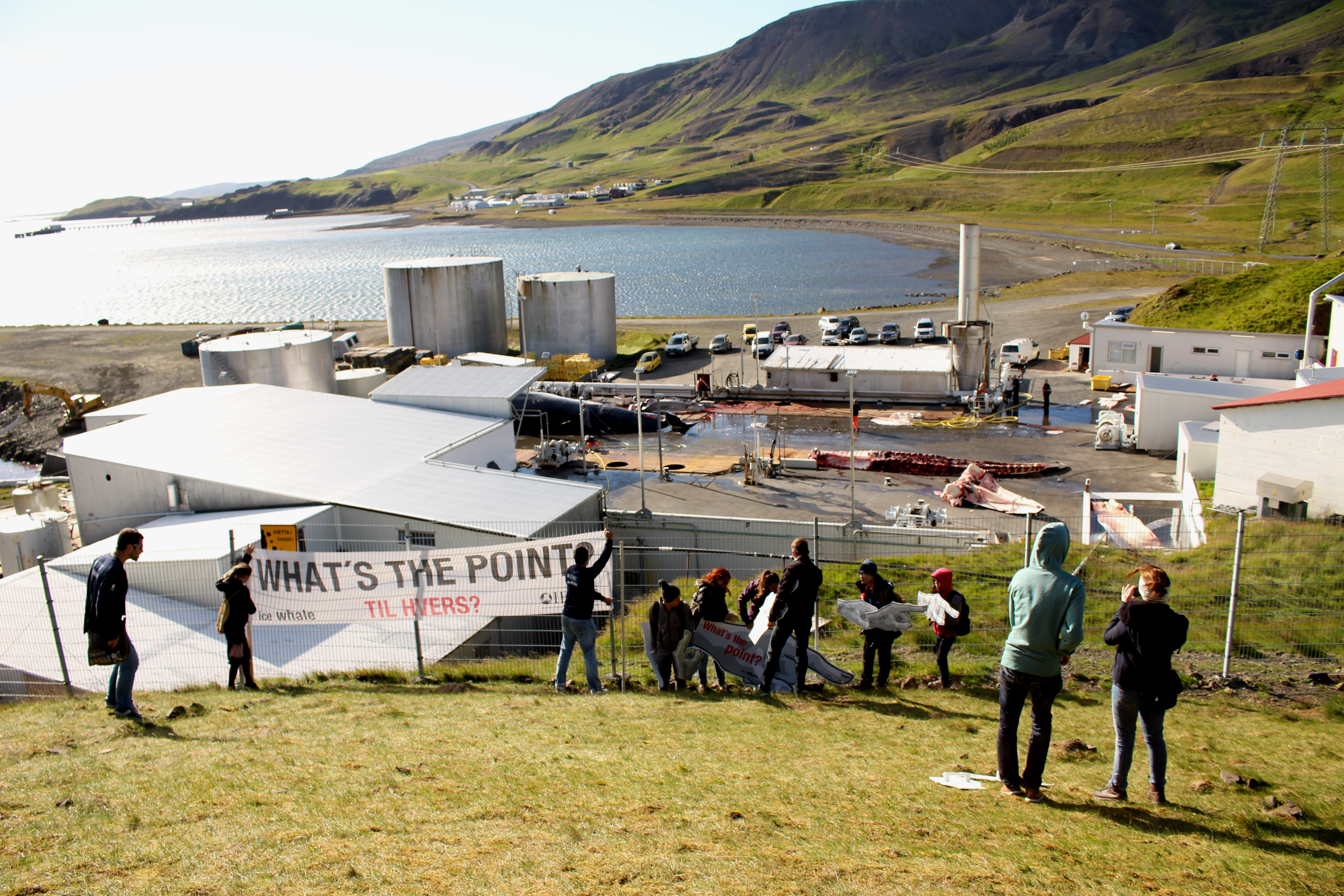 Pointless
Meanwhile, the protestors had gathered on the side of the hill overlooking the dock, holding up cardboard hands pointing towards the ocean that read, “What’s the point?” along with a large cloth banner that reiterated the question. While implicitly peaceful, the protesters were almost passive, spending the time quietly observing the activity of the whaling workers, or chit-chatting amongst themselves. The lines between interested onlooker, horrified visitor and outraged protester were almost impossible to distinguish, save for those cardboard hands.
The workers finished butchering up the first whale and dragged the remaining chunks off, dropping them into holes in the dock that possibly led to further processing or simply a refuse pile. Marvin walked down from the hillside and pointed my attention toward a worker heading to the far back end of the dock, dragging away with him the titular fin. It was taken somewhere out of sight but not discarded, most likely to be kept as a trophy.
The second whale was now attached by its tail to the hook-line of one of the pulleys and gradually brought up onto the dock in the same place the first whale had been. The workers stood around it, dwarfed by the mass of the second largest cetacean in the ocean. At this point, there didn’t seem to be much need to watch the slow-motion replay.
The protest broke up and people began heading back to their vehicles, save for a few onlookers there for neutral observation (or perhaps genuine entertainment? Who’s to say). On the drive back, through the warm, sun-filled fjord, our intern spoke up. “It’s weird because I’d never seen a whale before,” she said. “And now the first time I saw one, it was dead.”
—
Finback whales are being hunted exclusively by the company Hvalur hf. Their buyers in Japan recently cancelled their contract after it was revealed the meat was being used for dog treats.