After four decades of resistance, one of the most iconic houses from the eruption of Vestmannaeyjar recently collapsed under the burden of pumice and lava. It stood by a street called Heimagata and was built over 70 years ago. Its occupants, like the rest of the islanders, were forced to leave their home on a cold January night in 1973. Despite efforts to save buildings from the weight of pumice piling up and piping hot lava slowly creeping closer, the house—called Blátindur—was swallowed by Mother Nature in late March that year.
For a long while the only remains of the house sticking out of the cooled lava were its living room walls, with a big window frame inviting curious visitors to have a look inside at the destruction when lava engulfed the eastern part of the town. But now Blátindur is forever gone; it’s a reminder of time passing, the past vanishing and memories in danger of becoming forgotten. That’s partially why two islanders, born after the eruption, wanted to capture the survivors and their stories in a film, preserving first-hand accounts of what really happened in 1973.
“What we’re doing with this documentary is to get people to talk about the trauma of these events, for the very first time,” says Jóhanna Ýr Jónsdóttir, the historian who made the documentary with her childhood friend, broadcast journalist Sighvatur Jónsson. “The survivors didn’t receive much counselling at the time and since then they’ve concentrated on talking about the positive things. As one of the elderly ladies says in the film, they didn’t allow themselves to talk about the difficulties. It was simply a matter of survival.”
Jóhanna Ýr was driven both by personal interest in the town she grew up in and her passion for history. “People don’t realise how long it’s actually been—forty years. Those who were 30 then are now 70-years-old,” she says. “I thought it was important to make this documentary now as their stories are an important record of historical events. But I was curious to find out what it was like for people forced to leave their home because of a spewing volcano, becoming a refugee for some time, and perhaps never returning to the island but as a visitor.”
She recalls growing up in Heimaey, the only inhabited island of the Vestmannaeyjar archipelago, always hearing about how successfully the islanders rebuilt their town and reconstructed the society of their beloved island. The change in the landscape following the eruption had its benefits; the town is now better sheltered from the stern easterly wind and the lava that flowed into the sea created a much better channel into the harbour.
Whispers in the aftermath
But amongst all the heroic stories of the hard working islanders who claimed their island back were the whispers about those who didn’t return, or things that were sorely missed.
“For my generation, it was a little strange growing up here. We heard so much about how the town looked like before the eruption that we felt as if we’d been there,” Jóhanna Ýr says. “And you’d only hear positive things about the eruption and its aftermath. But every now and again, people would say something that made me realise that there had been a world there that I would never know, a vanished world. For instance, the time I was a little girl, walking with my mother past the area where Blátindur stood and her saying ‘Somewhere there underneath lies my wedding band.’”
It dawned on Jóhanna Ýr that she might not know her hometown all that well. “The title, ‘My Unfamiliar Home—Accepting the Volcano’ refers to the people who grew up here after the eruption and heard so much about what this town was like before, to those who returned to an unfamiliar island and also to those who didn’t return and felt out of place on the mainland.”
One of the interviewees in the film, Kristinn, had lived his whole life in the eastern part of the town and had just built a new house for his wife and young daughter when the eruption started. Their house went under the lava in less than a week and Kristinn never returned to live in Vestmannaeyjar, because he didn’t feel as if it was his home anymore; everything that was familiar to him had been covered with lava. A scene in which Kristinn reads an excerpt from his diary always brings a tear to Jóhanna’s eye. “That’s what surprised me the most, all this hidden heartache, especially amongst those who never moved back to Vestmannaeyjar,” she says. 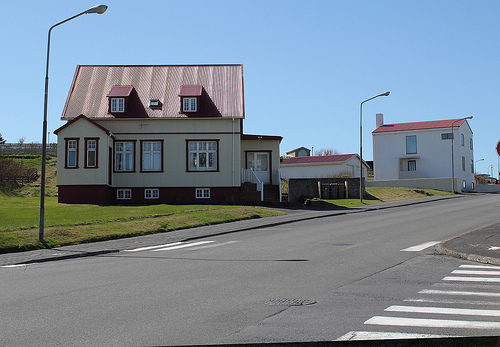 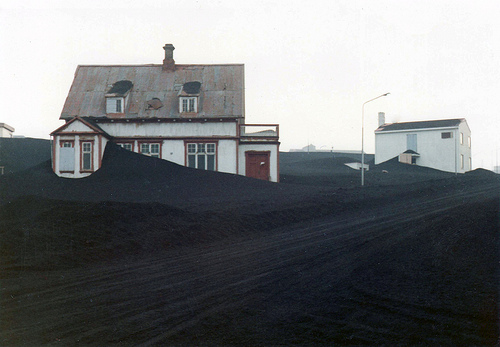 To Jóhanna’s surprise, some of the people she’d known for years and considered “toughies” got teary-eyed when they talked about the eruption, though they tried to hide it. “We’re not used to getting emotional or talking about our feelings,” she says, echoing what the elderly characters in the film said. In those days, people just didn’t talk about the shock or the strain of the catastrophe, focusing only on the good things.
One delicate matter which Jóhanna and Sighvatur shed a light on in the film is the death at the pharmacy, the only casualty during the eruption. Miraculously, everyone was saved on the night that the eruption started but weeks later, when volunteers were allowed on the island to save what could be saved, a young man died from poisonous gas when he attempted to steal prescription drugs from the town’s pharmacy.
“There was very little talk of that, probably because he wasn’t born and bred in Vestmannaeyjar and because his death wasn’t heroic,” Jóhanna says pensively, adding that she’s already been criticised by some locals for giving his story such weight in the film. “But he was a real person and had a loving family who was eager to tell his story. He had lived there for 14 years and loved Vestmannaeyjar. So we finally put a name and a face to that one casualty that people have avoided talking about for so long.”
There are other angles in the film that also haven’t been covered much before. As a mother of three now, Jóhanna says she became more interested in what effect the cataclysm had on the children, and what it must have been like being a parent on the run from a volcano, families living like refugees on the mainland.
“Many of the children never adapted to their new circumstances on the mainland. Some of the people I interviewed told me, even though they didn’t want to say it on camera, that they had in fact been taunted,” Jóhanna says. The children often felt out of place and longed for their home, their playground and their friends. In the film, one woman describes how her young son was constantly reminded by his new schoolmates how he had lost all his toys, all his things, his home. Eventually he refused to attend the new school and only became his usual self again when they finally moved back to the island.
That’s not to say that people weren’t concerned about the children. The Norwegian Red Cross invited the kids from Vestmannaeyjar to Norway in the summer of 1973. More than 900 children went and stayed in summer camps or in people’s homes. “For some, this trip was a fairy tale and they have happy memories from that time, still talking about the trees they climbed in Norway,” Jóhanna says and chuckles at the fact that it was possibly the first time they saw actual trees. For others, the stay in Norway was not as pleasant and in the film. Jóhanna talks to a psychologist who states that as much as it was a beautiful gesture, shipping all the children away from their families during such a trauma would never be done today. However, in 1973 this was the only effort specifically aimed at easing the children’s’ minds.
Jóhanna says that it wasn’t hard to get people to open up and talk about the negative aspects of the eruption. “The strange thing is, they were rather surprised that anyone would be interested in hearing about them,” she says. “We were not trying to psychoanalyze anyone, but we think it’s time to tell the whole story. Not talking about something as huge as this, for forty years, is not healthy.”
—
Forty Years Since The Eruption In Vestmannaeyjar 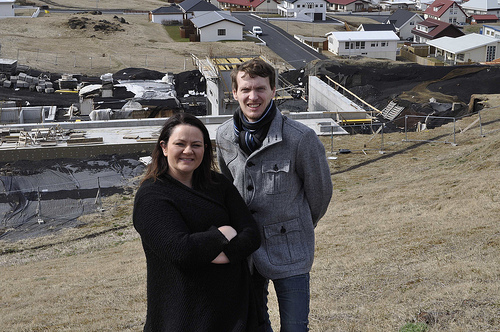 On January 23, 1973, a volcanic eruption started on Heimaey, the only inhabited island of the Vestmannaeyjar archipelago off the south coast of Iceland. The 5,300 islanders were rudely awoken when a 2km long fissure opened up at the eastern edge of the town, just 200 metres away from the nearest houses. A fleet of boats and airplanes managed to evacuate the island in only a matter of hours, leaving only a group of men who took on the task of trying to save whatever could be saved.
Crews of volunteers worked hard the following weeks, shovelling ash and pumice from rooftops, putting out fires and sheltering houses from falling tephra to save at least some of the properties. They managed to save the harbour and some houses by dousing the lava flow with seawater, steering the direction of the lava flow. Of 1,345 houses, 400 were destroyed during the eruption and another 400 were damaged. On June 26 the same year, the eruption died down and was officially declared over on July 3. Many of the islanders slowly returned to clear up the town and rebuild it while others never returned.
Every year on the island, the inhabitants of Heimaey—around 4,000 today—and those who relocated to the mainland, celebrate the end of the eruption with a festival the first weekend of July. This year, on the 40th anniversary of the eruption, a new documentary, ‘My Unfamiliar Home—Accepting the Volcano,’ will be screened at the festival. It will air on RÚV (channel one) on July 7 and will be out on DVD in English later this year.