On the cover this issue are 10 people who have appeared on the cover of a past Grapevine issue in each of the last 10 years. They are significant for one reason or the other, and we are pretty proud to have them all on the cover once more, this time together, celebrating our tenth birthday! Read on to learn more about the cover stars and why they are there… 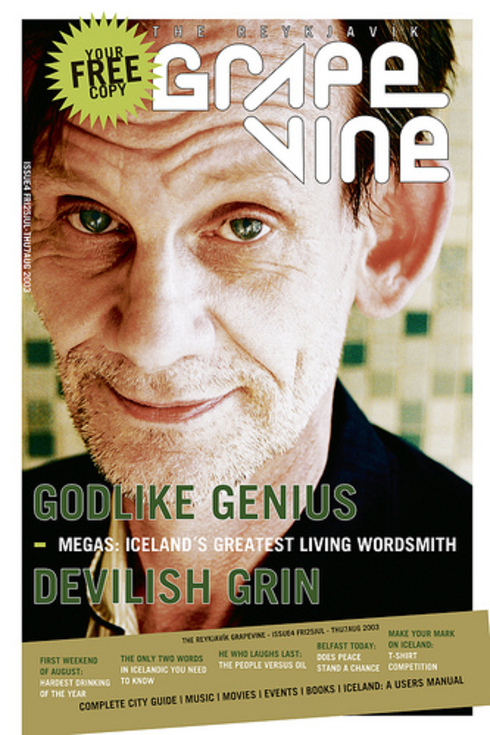 GV 4, 2003
This was the fourth issue of Grapevine, our first cover interview and in some ways the first issue that we were truly happy with. Despite his influence on his sometime collaborator Björk and pretty much everyone else in Icelandic music, Megas is largely unknown abroad, which perhaps goes with being a brilliant lyricist in one of the world’s smallest languages. During the interview, we talked about pretty much everything except his career, and it was very interesting to get the Megas world view. And nice to leave your hero holding an even higher opinion of him.
– Valur Gunnarsson 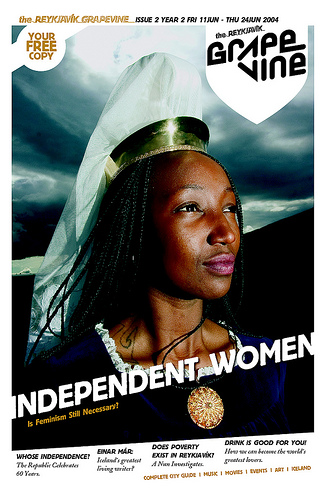 GV 2, 2004
We had no idea what we were getting into when we asked Sheba to model for our cover. A recent immigrant working as a barista at Segafredo at the time, she made her way into Icelandic cultural history after our cover caused a furore and was subsequently shown in art exhibitions, taught at the university and spoofed in cartoons and comic shows. Most people applauded the vision she represented of a more heterogeneous future for Iceland on its 60th anniversary, but there was a dark side. Both she and I would soon receive threats by ultra-nationalists, which is probably more than she signed up for. Her bravery in some ways did change the country.
– Valur Gunnarsson 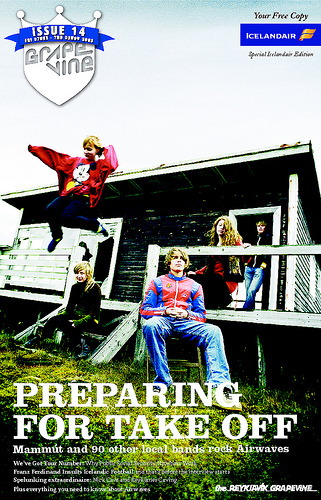 GV 14, 2005
Mammút were on the cover of our first Airwaves tie-in. They were so young when we took this photo. I thought it was so expressive—and it matched the optimism that we had when we approached this festival. When I took over the year I wanted to get away from the superficial, hype-and-stereotype writing that the Icelandic and foreign media were doing on the festival. I felt if we could just send reporters out to write honestly about every band, it’d be a huge departure from anything we’d seen before in festival coverage. What still stuns me about the whole Airwaves project is that we’re the only magazine I’ve come across to make any effort to do something like this: to actually report on music instead of massage press releases.
– Bart Cameron 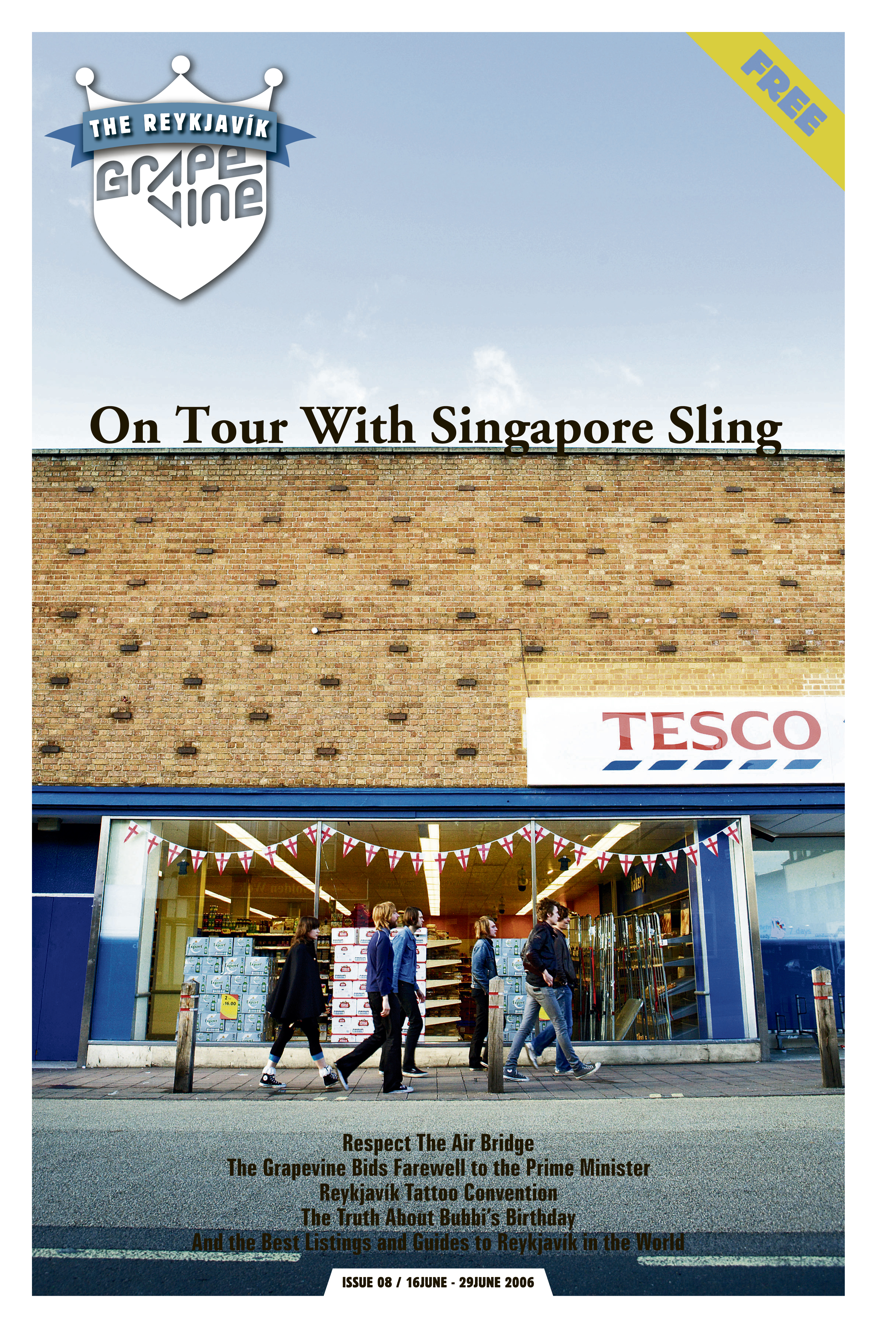 GV 8, 2006
This was Singapore Sling in Stoke on Trent, on tour with the Brian Jonestown Massacre. They gave me all access. We were a little short-staffed, and so I had worked 48 hours straight before flying to London to catch up with the band. The experience was like ‘Almost Famous’ if it were directed by David Lynch. The music of Singapore Sling and BJM is fantastic, but the divide between the lifestyle and meaning was jarring. I watched these fantastic concerts with fans who were decent people, made by bands who were surprisingly open and friendly, and the result would be, well, Henrik from Singapore Sling summed it up: “A fan in Norway took me to his house and told me my music was great, it made him want to commit suicide.” The on-edge brilliance butted up with supernatural banality. I should also admit that I had a very high fever for most of this trip, and the photographer ended up evacuating me to his house. When I flew home to Iceland, next to a prominent politician, I looked like I was coming off a heroin addiction.
– Bart Cameron 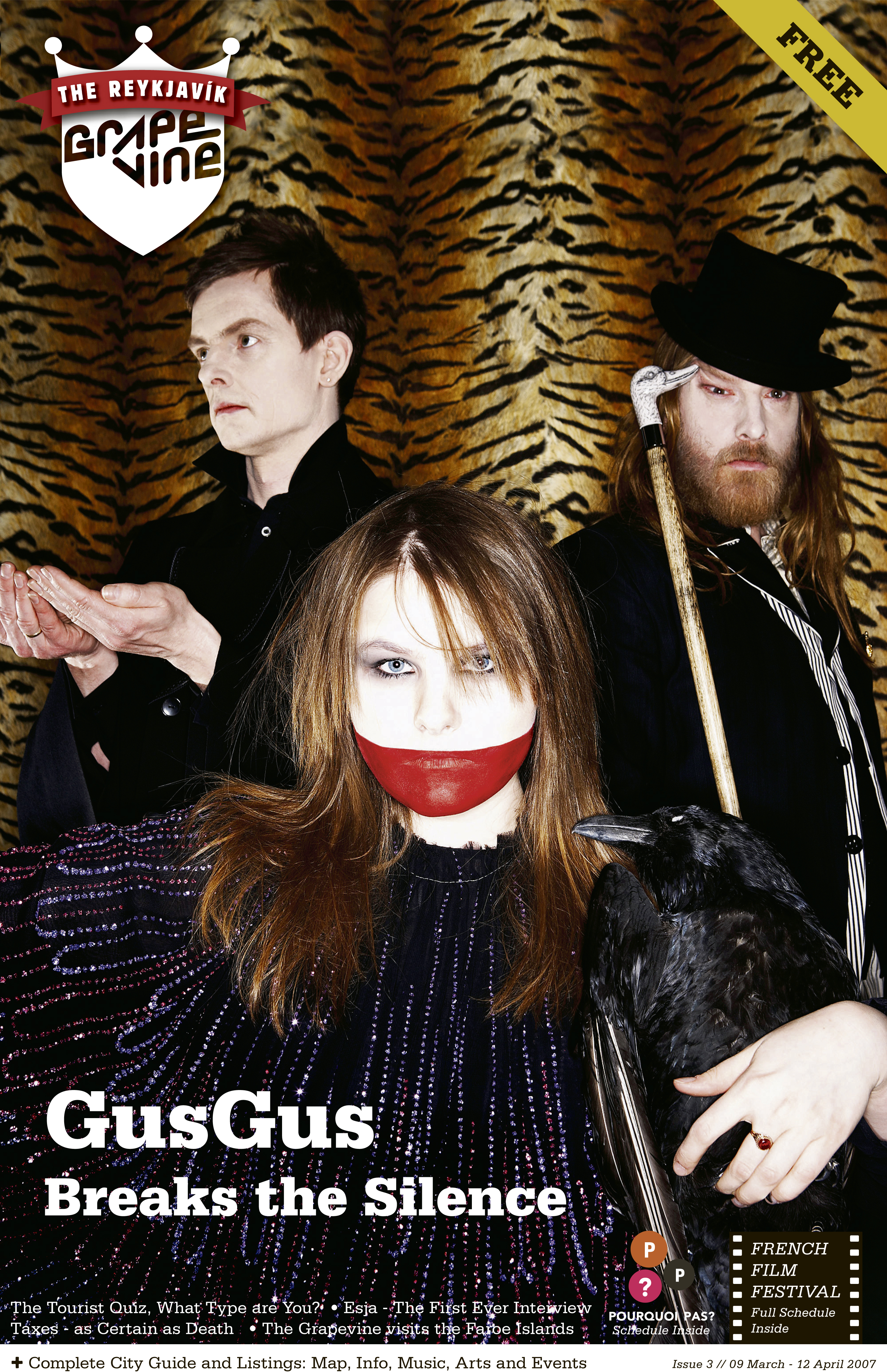 GV 3, 2007
So… GusGus. I don’t really remember much about this cover, other than we were having difficulties coming up with a concept. Then we found out GusGus had just done a photo shoot to promote their upcoming album. The band was one of the original music success stories out of Iceland, and this was their first album in five years. So we got to use some photos from that shoot for the cover and did a last minute interview with GusGus member Biggi Veira to go with it. It worked out great in the end. The visuals were really strong, but usually, the material dictates the cover, not the other way around.
– Sveinn Birkir Björnsson 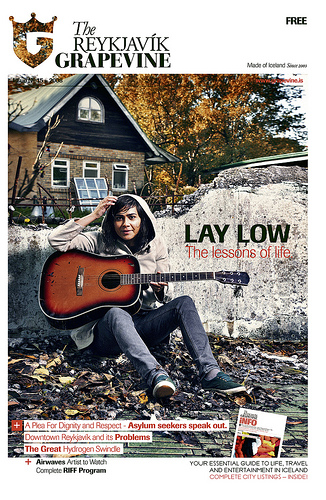 GV 15, 2008
We did a great interview with Lay Low for this issue and we wanted to put her on the cover. She was just about to release her second album, and we not only liked the album, but also loved the fact that a female country and blues artist from Iceland was making waves. This is the first of many covers Baldur Kristjáns would do for The Grapevine. We really liked the way he managed to capture the tender, delicate person that appeared in the interview.
– Sveinn Birkir Björnsson 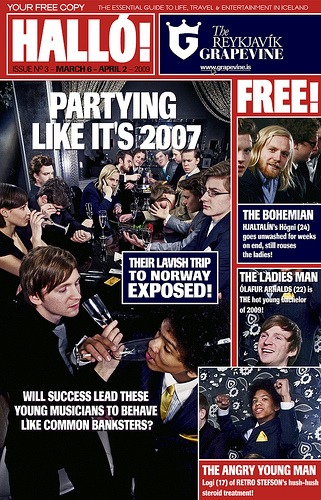 GV 3, 2009
As protests still raged at Austurvöllur, we accompanied composer Ólafur Arnalds and the bands Hjaltalín and Retro Stefson to Oslo’s annual By:larm music festival. All three acts had much going for them at the time, critically acclaimed albums and positive post-Airwaves write-ups abound. A lot had been brewing in Reykjavík’s much-hyped music scene; it felt like it had reached a bursting point, that it was time for someone to break out. Wanting to capture that fleeting moment, we tagged along for the showcase ride and documented the artists strutting their stuff for the Norwegians.
Meanwhile, Icelanders were busy being indignant about the lavish lifestyles their financial elites had enjoyed (a turn from aspiring to/celebrating them). SHOCK! reports on lavish gold-eating, coke snorting private jet parties filled the media. This amused us, so we played with that theme on the cover, setting the musicians up as hubristic banksters partying it up in the most 2007 setting we could imagine. Designer Jói Kjartans then brought the idea of setting it up tabloid style, modelling the cover on an issue of HELLO!
– Haukur SM

GV 15, 2010
When you see a political figure (such as Hannes Hólmsteinn Gissurarson) on our cover, this is not in any way an endorsement—rather it is our understanding that they at that time have things to say that are relevant to readers’ interests. This was certainly the case with our Steingrímur J. Sigfússon cover, the only time an active minister has graced our front page.
As minister of finance, which was in 2010 one of the most important posts one could hold in Iceland (due to some events of a couple of years earlier, we forget exactly what). After hearing some disturbing stories regarding “the true state” of Iceland’s finances, and also because we had the hardest time understanding what exactly was happening, we reached out to the notoriously busy Steingrímur. To our surprise, he picked up and granted us an interview and cover shoot. In the story, he talks a lot about “cleaning up the mess”—this provided a theme for our cover, which was shot by Baldur Kristjáns.
– Haukur SM 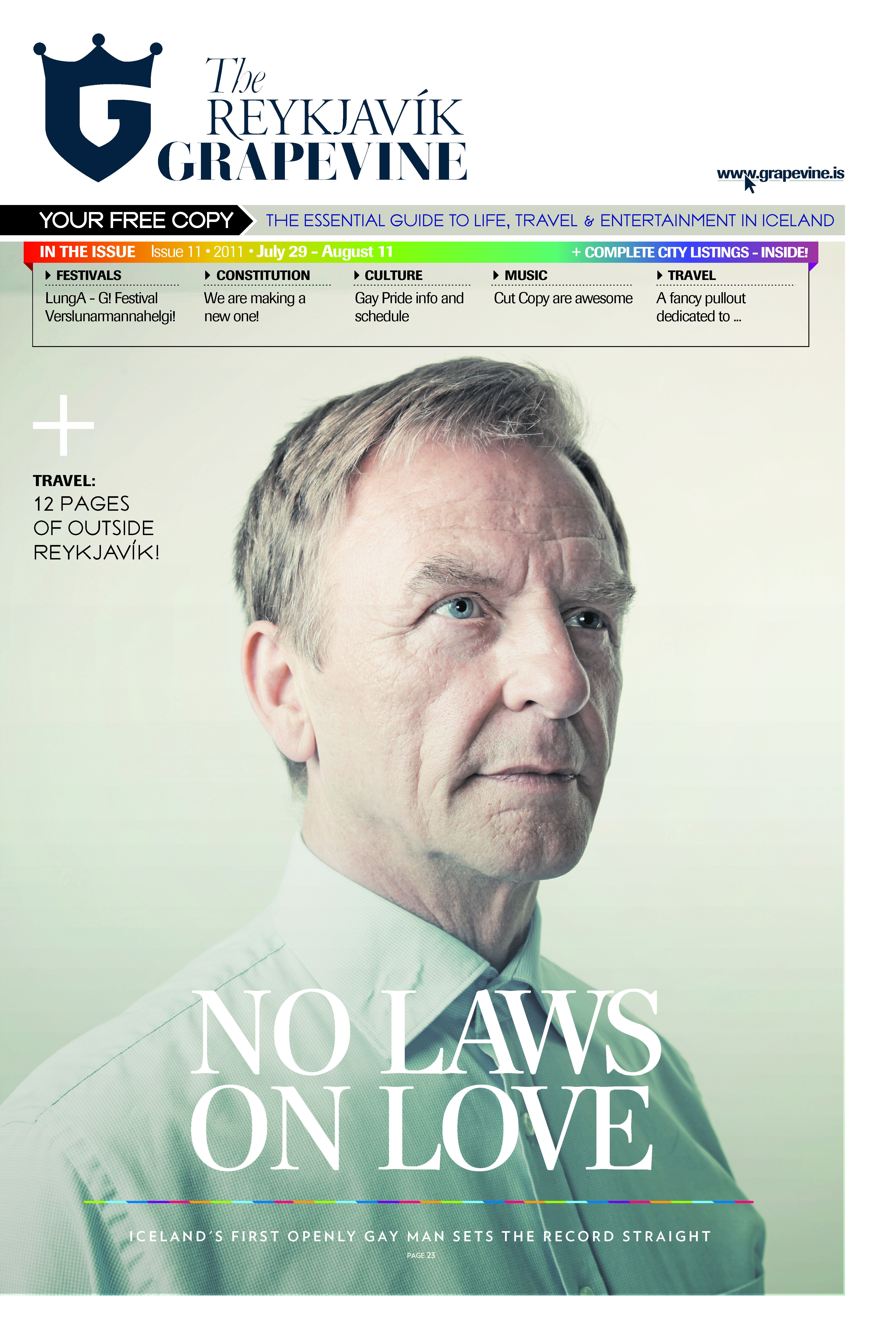 GV 11, 2011
I was filling in for Haukur this issue while he drove around Iceland in one of those Happy Campers campervans. I thought it went pretty well although Haukur had prepped most of it before he left and Sveinn Birkir came in to help too. I have since learned that making Grapevine issues is a lot more work than it was for me this first time. In Grapevine’s ninth year, this certainly wasn’t the first time the annual Gay Pride celebration featured in an August issue, but we thought an interview with Hörður Torfason made for a nice twist. Not only is he Iceland’s first openly gay man, but he also played a large role in the story of Iceland’s ‘Pots & Pans revolution,’ which the world had been watching so closely. 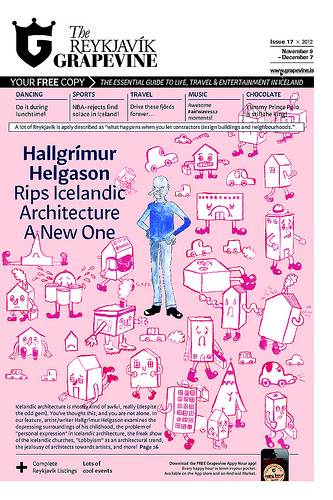 GV 12, 2012
This issue features an amusing article by Hallgrímur Helgason in which he ponders Iceland’s tradition of building ugly houses. It was originally written as a speech, which he gave at the Louisiana Art Museum in Humlebæk, Denmark, but we thought it made for great reading and he gave us permission to print it. For the cover, Hrefna Sigurðardóttir illustrated an angry looking Hallgrímur Helgason surrounded by a bunch of sad looking architectural sites around Reykjavík, including his cleverly dubbed “Indian Tent” and “NASA Mobile Launch Platform That Accidentally Fell on the Ground After Liftoff of the Space Shuttle and Then Was Painted White.”
– Anna Andersen