Haukur Guðjónsson has just finished painting his office bright red, the colour of his company logo. That is, he’s painted a single wall in his nook of the shared workspace set up by the government-run institute, Innovation Center Iceland. There he works alongside companies like Icelandic Cinema Online, Kúla and, Karolina Fund, which rent space by the desk at 12,000 ISK per month.

Against his freshly painted wall, Haukur has two desks where he and another employee have been working full-time for the last year. After three years of bootstrapping, often working out of cafés, Haukur says his summerhouse rental service, Búngaló, is finally taking off.

It wasn’t easy, though, with the lack of available funding impeding progress and grander plans. “I originally wanted to expand the service to Scandinavia, but my funding options at the time were NSA Ventures and Frumtak, and I wasn’t really far enough along for that,” he says.

In terms of funding, Haukur explains that there are three basic options. First, he says, a startup can apply for a government grant. This could come from the Innovation Center Iceland, which offers a few hundred thousand ISK, and the Rannís Icelandic Research Fund, which awards slightly larger grants of five to 30 million ISK.

Then there are investors like NSA Ventures, a government fund founded in 1998 to invest between 50 and 200 million ISK in seed stage startup companies, and Frumtak, an investment fund founded in May 2008 to invest 50 to 500 million ISK in larger companies. And finally there are some private funds like Investa, Thule Investments and Eyrir Invest, which Haukur says aren’t very active.

“A lot of investors here in Iceland don’t understand the startup community. I don’t think anybody in Iceland is really investing in early stage startups,” Haukur says. “NSA is the first one you can look into, but your company has to be at least a year or two along at that point.”

Removing this obstacle is one of the goals of the upcoming Startup Iceland conference set into motion last year by Bala Kamallakharan, a former director of Glitnir bank in India and an early stage investor in Iceland. He envisioned the conference as a way to address the lack of seed angel funding and mentoring available to startups and a way to build bridges to a bigger market.

After getting Brad Burnham—an early investor in Tumblr and Indeed, which both achieved cash exits north of $1 Billion USD in the last seven months—to be a speaker, he and a trusty team of volunteer organisers, including Haukur, put the first conference together. In true startup fashion, they got the Andrews Theater at Ásbrú on the former U.S. Naval Air Station in Keflavík to let them use their venue free of charge.
[vimeo 43961454 w=490 h=276]

“Desperation is a fantastic motivator,” Bala says. “When you get really desperate you pull out all the stops. I think the financial collapse brought that to Iceland and I think that’s a good thing. That’s the Icelandic spirit, you roll up your sleeves and get shit done. And maybe in the boom years a lot of that wasn’t obvious, so the collapse brought that all back. If we can channel that into the entrepreneurial spirit, then we’ve got something going.”

Conference organisers Stefán Örn Einarsson and Kristján Már Gunnarsson have secured three times as many sponsors this year as they managed to scramble together the first time around. The two of them, who work together at a local management-consulting firm, see working on this conference as their startup project and, like Bala and Haukur, want to see the community thrive.

Indeed, Iceland’s startup community has grown in the post-crash environment. “Before the collapse, there wasn’t really any kind of startup environment. There was no place for people to get together and communicate,” Haukur says.

“After the crash, a lot of very talented people who were laid off from the banks started their own businesses. They created some great companies like Meniga, for example, which is probably one of the hottest companies in Iceland right now.”

In addition to Meniga, which provides a service similar to Mint.com in the United States, Haukur mentions CLARA, a software company that Bala invested in three years ago, which was just acquired by Jive Software Inc for one billion ISK, marking the fastest Icelandic exit and the first one to a Silicon Valley company.

When word got around that Bala was investing in startups, he says every entrepreneur wanted to meet with him. “Talking to them, it seemed like everyone felt like they were alone in this journey, which I found pretty strange because Iceland is a well-connected society,” Bala says.

“So I started thinking about I could do, and I thought what if we could get a seasoned guy, with ups and downs, to share those experiences with these startups, to build a community feeling. Then I got Brad to come, and that was all I needed, the spark to get this started.”

Haukur and the guys are convinced that the Startup Iceland conference will be helpful to other entrepreneurs in terms of making these valuable connections. “It’s a fantastic opportunity to network with a lot of influential people from around the world,” Haukur says.

“It’s difficult to compete with Silicon Valley, but we can create an environment where people are motivated to do something and feel like they have a chance of doing it. I think now with all these success stories, the mindset is changing. There’s lots more activity than there used to be, but I think we have a long way to go.”

Also a speaker at last year’s conference, President Ólafur Ragnar Grímsson sees Iceland’s burgeoning startup community as part of what he called a third wave of innovation, the first wave starting in Iceland twenty years ago with companies like Marel making things primarily for the Icelandic market; the second wave starting ten years ago, with companies like CCP realising that the entire world could be their playing field.

“I’ve come to the conclusion that Iceland might serve, and I emphasize ‘serve’, as a location to help this third wave into reality, helping to create an atmosphere and location where people can freely come together and make sure that we can all move forward, irrespective to the attempt of others to put up hindrances,” the president said.

Although Stefán and Kristján believe that Iceland could play an important role in securing “the freedom to innovate,” which Brad Burnham says is a core freedom being impinged upon by government policy, they don’t buy that Icelanders are somehow special or different that the rest of the world’s entrepreneurs. “I often joke about entrepreneurs being a little bit nuts. You have to be a little bit nuts,” Haukur notes. “You really have to put all of your energy, your money, everything you have, into it. It’s very difficult. You have to have that to thrive.”

That’s not to say that the Icelandic entrepreneur doesn’t face a unique environment given that there are only 320,000 people in the country. “Usually when an Icelander has a great idea, like to open up an ice cream store, three months later, there will be five or six of them, and everybody will go bankrupt,” Kristján says, bringing everyone to laugh. “It’s because we are a small community. If somebody sees that this guy seems to be pretty successful, he thinks, ‘Why can’t I do it?”

Thus they emphasise the importance of making connections to the outside world. “We live on a small island in the North Atlantic Ocean and it’s a big leap for us to expand into other countries, but I think that is changing, partly due to this conference,” Haukur says. “We are getting people to realise that they can grow, that they can become an international company.”

Eventually, they would like this conference to have the same status that Airwaves has in the international music world. “It took Airwaves how many years to become part of the culture?” Kristján says. “It took a while, but they stuck with it and look where they are today. It’s a fantastic festival. Bands have become successful after playing at Airwaves.”

“Airwaves is all about bands, promoting bands out of Iceland, so why not do the same for startups? Entrepreneurs are the new rock stars,” Stefán says matter of fact. “Incremental steps, one year at a time, we’ll get there.”

But ultimately they are trying to build a sustainable community. “We can’t just have this conference, the business accelerator Startup Reykjavík, and these two or three other things going on,” Kristján says. “We need to have these things going on systematically over the course of the year. That’s what the startup communities are all about. We want to do something sustainable. Innovation takes time, patience and effort. We have to be in it for the long-run, to build a community that gives birth to more of these events.” 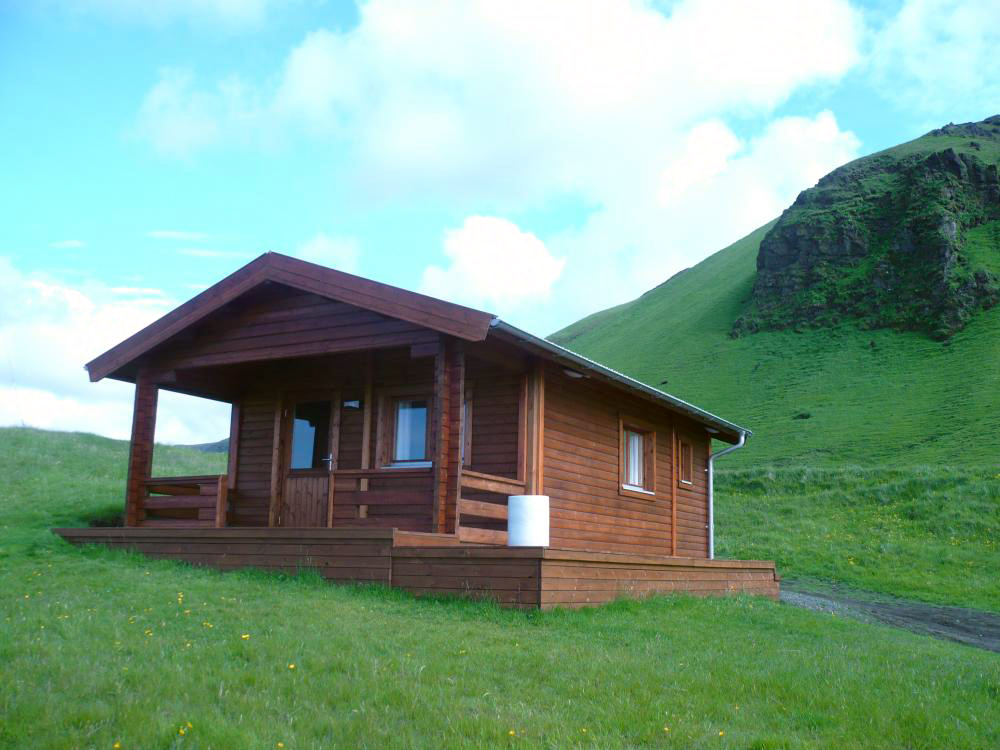 WHAT’S A BÚNGALÓ?
Haukur gives us his elevator pitch

In the summer of 2009, Haukur Guðjónsson wanted to escape to the Icelandic countryside. After navigating a labyrinth of unhelpful internet resources that revealed only dead ends, he decided to channel their frustration into something proactive. Thus, Búngaló was born. The company aggregates privately owned Icelandic summer homes whose owners want to rent them out when they are not in use. Visitors can browse through over 200 cottages scattered all over Iceland—from downtown Reykjavík to the high countryside, from the Westfjords to the Eastern-most seaboard. These perfectly quaint destinations lack none of the luxuries of a standard hotel room, except maybe room service, as many of them boast BBQs for daytime grillin’ and hot tubs for nighttime chillin’. Ready to relax? Check out the website: www.bungalo.com.