From Farm to Fork

Rummaging through boxes of vegetables in a local supermarket recently, I noticed something on my quest for the holy trinity of quality and freshness at an affordable price. The level of debate going on amongst shoppers about the quality of vegetables relative to their cost seemed to be greater than for any other food types. Perhaps it’s due to the rising popularity in trends for vegetarianism, veganism and more eco-conscious lifestyles? Perhaps the tighter squeeze on everybody’s pockets has led us to question what we are prepared to spend? Perhaps people are just feeling more patriotic and want to question their food sources more?
The cost of importing food is rising, particularly in the case of vegetables. Figures from Statistics Iceland show that the consumer price index (the CPI tracks the price consumers pay for a basket of everyday products) for the category of vegetables has risen steadily on average since January of 2008. The index peaked at 150 points in April this year, leading to an overall increase of 50% in the price of vegetables in less than three years. I set out to investigate why we consumers end up paying the price we do for Icelandic vegetables, and as a consequence came across some curious trends happening within the industry as a whole.
Supply and demand
A stroll through any supermarket will reveal that some Icelandic vegetable varieties are priced fairly competitively with imports (tomatoes, for example) while others cost a good deal more than their foreign equivalent (like zucchinis). So what makes for this variation in price?
Gunnlaugur Karlsson and Kristín Sveinsdóttir of Sölufélag Garðyrkjumanna (SFG – “The Gardener’s Sales Collective”), the company behind the brand Íslenskt.is, explain that the amount consumers end up paying for Icelandic vegetables depends on supply and demand. Here comes the science.
“The demand for products depends on the time of year. In summertime we are very competitive in price, as we have greater quantities of vegetables, especially tomatoes and cucumbers. It’s much more difficult to be competitive on price during winter as there’s less quantity and fewer varieties,” Gunnlaugur explains.
He adds that while there are variations, “It’s a myth that Icelandic vegetables are vastly more expensive than other countries.” This, he says, is an issue that again comes back to supply and demand. “We’re not exporting, so if farmers can respond to a high demand for produce by producing a lot, prices can then be kept down. For example, we had a situation during the summer, where Icelandic cucumber portions were cheaper in Bónus than their equivalent in Tesco supermarkets in the UK”. That’s a surprising fact to digest but illustrates just how competitive domestic produce can be if enough is produced. It seems that if you want to get value for money when shopping for Icelandic vegetables, there’s a much greater chance if you shop for varieties that are in season and plentiful. If you want strawberries in December, you have to expect to pay a lot more.
Supply chain 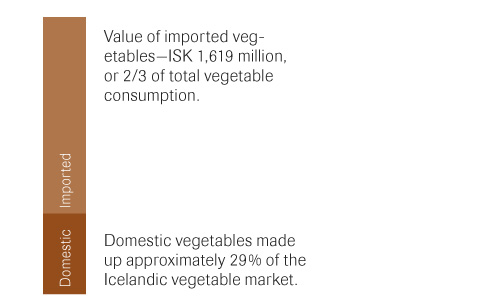