A polar bear appeared in Iceland this past Friday afternoon. Like previous polar bear sightings in Iceland, the bear arrived on a piece of ice and only stayed a short while. However, unlike its most recent predecessors, who came in white and went out bleeding, this bear came in red and went out in the white of a snowdrift. In fact, this bear was painted on the base of Langjökull (Iceland’s second largest glacier) as part of a global art exhibition entitled 350 Earth, which aims to raise awareness about climate change on the eve of the UN Climate Change Conference being held in Cancún, Mexico.
350 Earth is an exhibition taking place in dozens of places across the world—from Santa Fe, Santo Domingo and São Paulo, to Reykjavík, New Delhi, Cairo, and Fowler’s Gap, Australia—and is part of a wider programme of so-called “creative activism” engendered by a U.S. based, global organisation called 350.org. Grapevine caught up with the producer of Iceland’s entry to 350 Earth, Charlotte Ólöf Jónsdóttir Biering, just hours after the “polar bear on ice cap” happening.
Icelanders’ disappointing lack of interest
After months of preparing and planning, Charlotte is both elated and relieved: “It went really well! Obviously, having never drawn anything that big on a glacier before, it was a bit complicated, but we had an architect, some engineers and a special effects guy with us, and they worked out a system to map it all out.” Bjargey Ólafsdóttir was the artist who came up with the idea for the project, but nine other volunteers were involved in its final execution. The result was an 80 X 50 meter outline of a polar bear walking on four legs. Although first plotted out on a grid, the bear was painted in a kind of blind free-hand, and the team was not certain of their success until after descending the glacier and seeing aerial photographs. “I was worried it might turn out to look more like a dog,” Charlotte admits.
Charlotte, who is currently completing a Masters in Environment and Natural Resources Studies, first became involved in 350.org when she initiated a clean-up day in the marshy bird sanctuary that flanks the north side of Reykjavík’s Nordic House in the fall of 2009. She explains how 350.org operates as an open forum that encourages participants to act locally in bringing awareness and discussing solutions to the climate crisis. Although it was easy for her to instigate the clean-up project, Charlotte was disappointed by Icelanders’ lack of interest: “I sent out about 400 hundred invites, primarily to Icelanders, and twelve people showed up, all foreigners.” 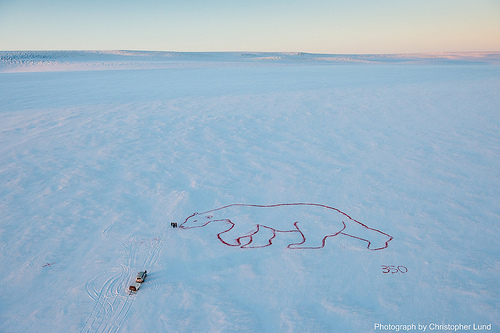 “The narrow-mindedness of certain cultures”
Although Charlotte does not find alarmist statements about climate change necessarily helpful to the cause, she worries about the “narrow-mindedness” of certain cultures that do not recognise the problem unless it is in plain sight (perhaps Sarah Palin put it best when she suggested that global warming was hardly an issue since she had yet to see Palm trees grow in Alaska). After all, this is a global issue. And Charlotte worries about Icelanders’ narrow-mindedness: “There is a misconception that everyone in Iceland is so in tune with nature…of Iceland as a green utopia. And sure, there are some things that Iceland excels at, such as hydro and geothermal power, but then you get here, and the bus system is terrible and people are throwing their trash out of their SUVs and onto the street.” Thus, the polar bear was aimed to inspire not just the world about Iceland and climate change, but Icelanders in particular.
The idea of using polar bears and glaciers seemed an obvious one. As Charlotte explains: “polar bears and glaciers are synonymous with climate change in the northern reaches of the northern hemisphere and we wanted to draw attention to the plight they face due to climate change.” After discussing the issue with Helgi Björnsson, Iceland’s leading glacier expert, Charlotte had some sobering facts to share: “Glaciers in Iceland are losing mass each year, and if the temperature rises as it is predicted to, Langjökull will melt to 15% of its current size by the end of the century. This will have significant impact on Iceland’s hydrological system and melting glaciers worldwide will contribute to sea level rise, putting people in coastal areas and small islands at risk.”

Disappearing polar bears
Despite the scientific consensus that we are currently facing a global
crisis due to climate change, 350 Earth remains first and foremost a
form of activism. As Charlotte explains: “The whole inspiration behind
this thing is based on the idea that visuals are much more arresting to a
normal person than a scientific document saying that the glaciers are
melting, if art wasn’t powerful then we wouldn’t have advertising, this
is how you catch people’s attention.” In other words, a picture is worth
a thousand words.
The polar bear was created using organic red colouring, which was
applied only a couple of millimetres deep into the snow. As Charlotte
points out, the environmental impact was minimal and temporary: “By the
time the team was leaving the wind was blowing fresh snow over the bear,
and after the weekend it will have totally disappeared…but hopefully
polar bears and glaciers will still be around for generations.”