“Do you think that people in Europe would ever want to revolt again if they thought that their banking community was treating them like feudal lords catering to speculative, buccaneering interest-rate arbitrageurs, instead of maybe servicing their needs as a democratic people?”
Max Kaiser interviewing Ásgeir Jónsson, Head of Research, Kaupþing Bank in 2007
On August 22, US investment advisor Mike Shedlock reported on his blog Mish, that former US Governor of the Federal Reserve (2006-2008), Frederic Mishkin—who is still employed as a professor at Columbia Business School—was paid $124,000 in 2006 by the Icelandic Chamber of Commerce to write a glowing report on the Icelandic economy. Shedlock includes a clip from filmmaker Charles Ferguson’s documentary, Inside Job, where a seriously miffed Frederic Mishkin tries to cover-up his underhanded dealings. Curiously, although originally entitled “Financial Stability in Iceland”, on Mishkin’s current CV the report has now been conveniently renamed “Financial INstability in Iceland”. (He says this was a typo—whoops, slip of the keyBORED.)
Ferguson’s film, which premiered at the Cannes Film Festival in May, was described by Indiwire as: “[A movie that] depicts one of the largest heists in history, breaking down the complexities that led to the rise of an out of control industry and the financial meltdown of 2008, plunging the world into crisis at a cost of $20 trillion and along with it millions of people’s jobs, homes, and dignity.”
One would think what with Icesave, the Black Report, the Special Prosecutor’s Investigations and the HS Orka/Magma debate, that the Alþingi has more than enough on its plate. Only now, they are truly being stretched to the brink. Iceland is facing a possible revisit of the 70s “cod war” played out with an entirely different kettle of fish: mackerel.
Mackerel madness
And Iceland is certainly not the EU’s flavour of the month. Aside from sneering Viking-like at the accession table, Iceland’s self-assigned mackerel quotas are literally driving the European parliament completely koo-koo. As stated in the Guardian, Brussels maintains that “Iceland and the Faroe Islands, who have ripped up agreed quotas, unilaterally awarding themselves the lion’s share of north Atlantic stock.” Iceland has set its mackerel catch quota at three times the quantity that the EU deems reasonable.
Struan Stevenson, senior vice-president on the European parliament’s fisheries committee, has called both countries “modern-day Viking raiders”, and stated: “…What will it take short of announcing we are going to institute a trade war? That is what I am actually suggesting now. We should use that as threat. We should follow the example of the fishermen in Peterhead. [Who recently blockaded a Faroe fishing vessel from landing its mackerel catch—apparently worth over GBP 400,000—in the UK port.] We should threaten to close all the EU ports to Faroese and Icelandic vessels, block all imports from these countries, and show them that we mean business.”
Stevenson goes on: “[Icelanders] are harking back to this great [cod war] victory [of the past], thinking they can do it again. But they have another thing coming. Because it’s not just Britain they are up against this time. It’s the whole of the EU and their close neighbour in Norway.” Maria Damanaki, EU Fisheries Commissioner, has made it quite clear that the EU is seriously considering imposing trade sanctions on Iceland. The Independent noted: “The EU, which suspects that Iceland’s [unilateral mackerel quota] decision is being driven by the parlous state of its economy, says it will reconsider all fishing agreements with [Iceland and the Faroes]—which could spell chaos to conserve stocks such as cod.”
Wikileaks wars 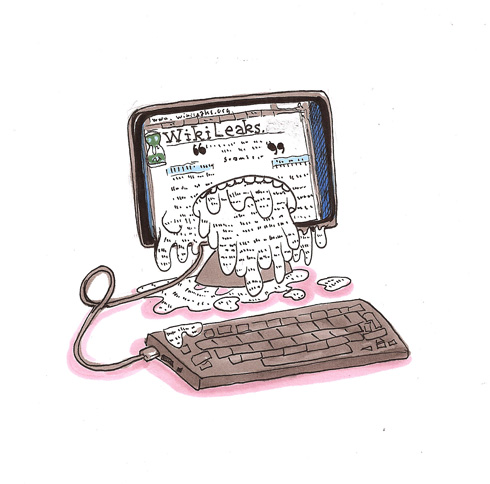 Meanwhile, over in the United States, the Obama Administration is calling for all of its allies to consider criminal charges against WikiLeaks’ Julian Assange for the release of confidential US military reports from the war in Afghanistan. An “American diplomat” interviewed by The Daily Beast this month maintained that WikiLeaks’ release of more than 70,000 war logs—and a threat from Assange to reveal 15,000 more—is putting all allied troops in Afghanistan in serious jeopardy. An “American military official” told The Daily Beast that Washington may want to review its relations with Iceland in the wake of Assange’s actions. Some may recall that Senator John Ensign blocked the confirmation of the newest US Ambassador to Iceland. According to the Las-Vegas Review-Journal, Senator Ensign only released the appointment when he felt assured that the nominee, Luis Arreaga, shared his concern about WikiLeaks. (One would assume this concern also includes the new Icelandic Modern Media Initiative.)
To top it all off, it looks quite like Iceland may be about to face a national referendum on the privatisation of energy resources. I am sure some of us are thinking: When in hell can we get down to leading our quiet pastoral life here on the brink of the Arctic Circle?