You Weren’t There, Man

As I write this, I am honestly still trying to comprehend what we experienced yesterday, when Grapevine’s plucky band of explorers-cum-journalists entered the restricted zone around the current eruption. I’ll try to describe what we saw, what we experienced, and a little of what it’s like in there. But, as the overused film quote goes, “You weren’t there, man!” It really is impossible to adequately convey…

So, our journey began with some car problems. Once we finally left Reykjavik, we continued on to Hvolsvöllur, where we gained access to the ‘RESTRICTED AREA’ past the Police roadblock. Stopping to take liberal amounts of photos on the way, because we were utterly in awe, we turned off Route 1 roughly where it had been severed, and drove until we reached the old bridge. Here we got a flat tyre – unbelievable timing, as we were promptly sent on our way by the immensely helpful Mountain Rescue guys. They rock and you should be thankful they volunteer their time to help your dumb asses (ours included!).

With every metre we got closer, our jaws dropped another inch. It was staggering, humbling, and ever so slightly unsettling to see that enormous ash plume towering over the mountain. It would pulsate with bursts of activity – sometime pure phreatic (steam) explosions producing white steam plumes, and usually a dark, ash-rich plume resulting from phreatomagmatic activity (water interacting with the magma under the surface to cause explosions). Again, we stopped for absurd numbers of photographs.

As we rounded the corner of the mountain and rejoined the ring road, the full scale of this really set in (and this is a relatively small eruption!). The whole area was deserted; the eerie peace disturbed only the occasional press truck or farmer trying to herd his horses away from the ash fall (what a sight to behold – a stampede of horses running from a wall of volcanic ash!). Driving towards it, as we approached the ash fall area, everything began to turn a fantastic golden yellow colour, even though the air seemed to remain fairly clear. Then we hit it – a wall of thick ash, turning everything deep brown and blotting out the sun. Only a yellow circle remained where the blazing evening sun had once shone.

We proceeded deeper into the ash, the air getting darker and thicker with every passing moment. Masks on, still every part of your body struggles with the environment – your eyes, ears, nose and mouth all feeling the ash hanging in the air. Everything stinks of sulphur. You suddenly realise how vulnerable you are, and how much power Mother Nature really has. Cool silhouette photos abound, but not without worries of the ash destroying your camera – judicious use of tape, plastic bags and other covers was required.

As darkness fell, we decided to leave. The sun peeked through the ash, just above the horizon, coloured a deep blood red. Absolutely stunning. As we carried on out of the ash fall zone, we found ourselves back at the old bridge just in time to witness the lightning storm developing in the ash plume. We don’t really know exactly why lightning forms in ash plumes, but it’s thought that the ash particles probably rub together, and this friction builds up static charge, which then discharges as lightning. Whatever the cause, it was an amazing sight!

I think Julia Staples’ fantastic photos captured most of this exceptionally well, but here are a bunch of lightning shots I took towards the end – my camera was somehow still working despite both the ash and the cold! Enjoy! Special thanks to ICE-SAR for all their help. 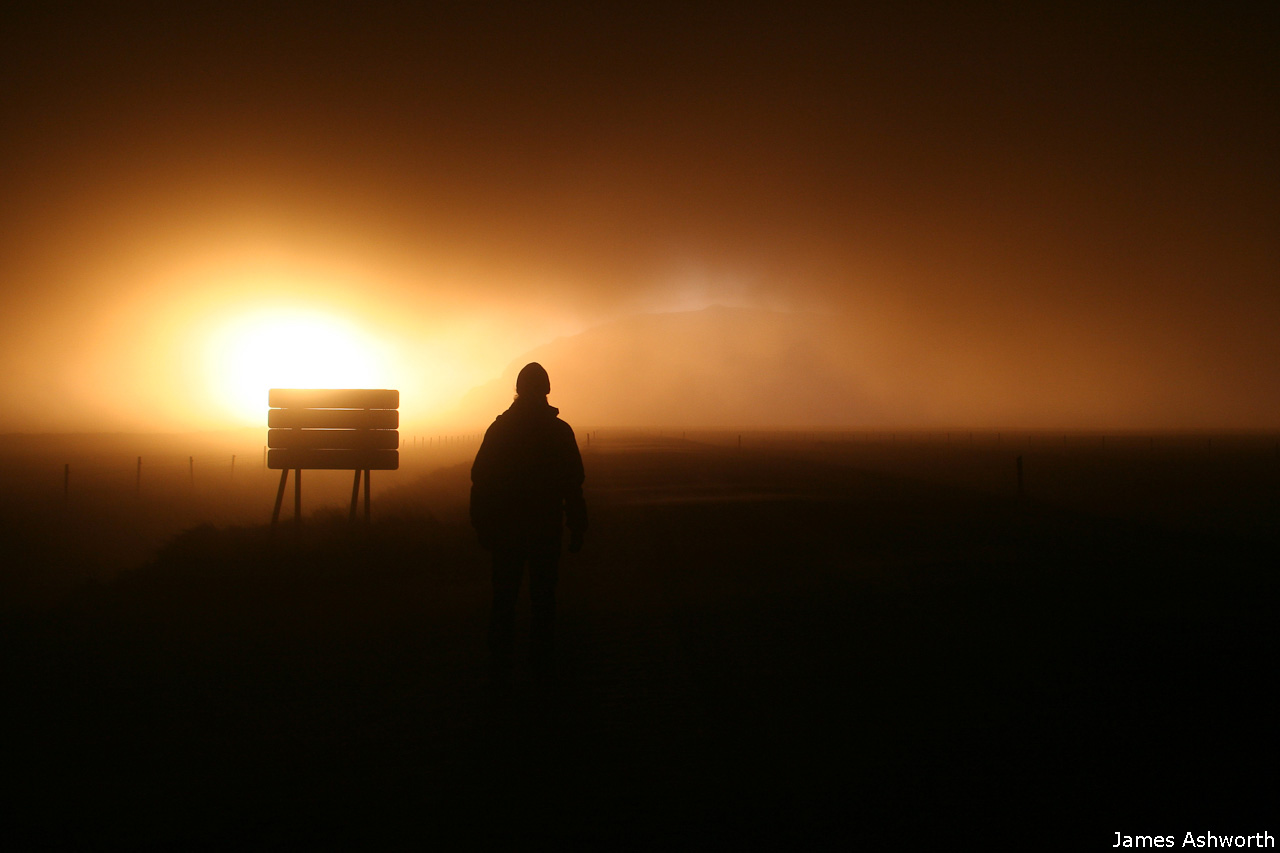 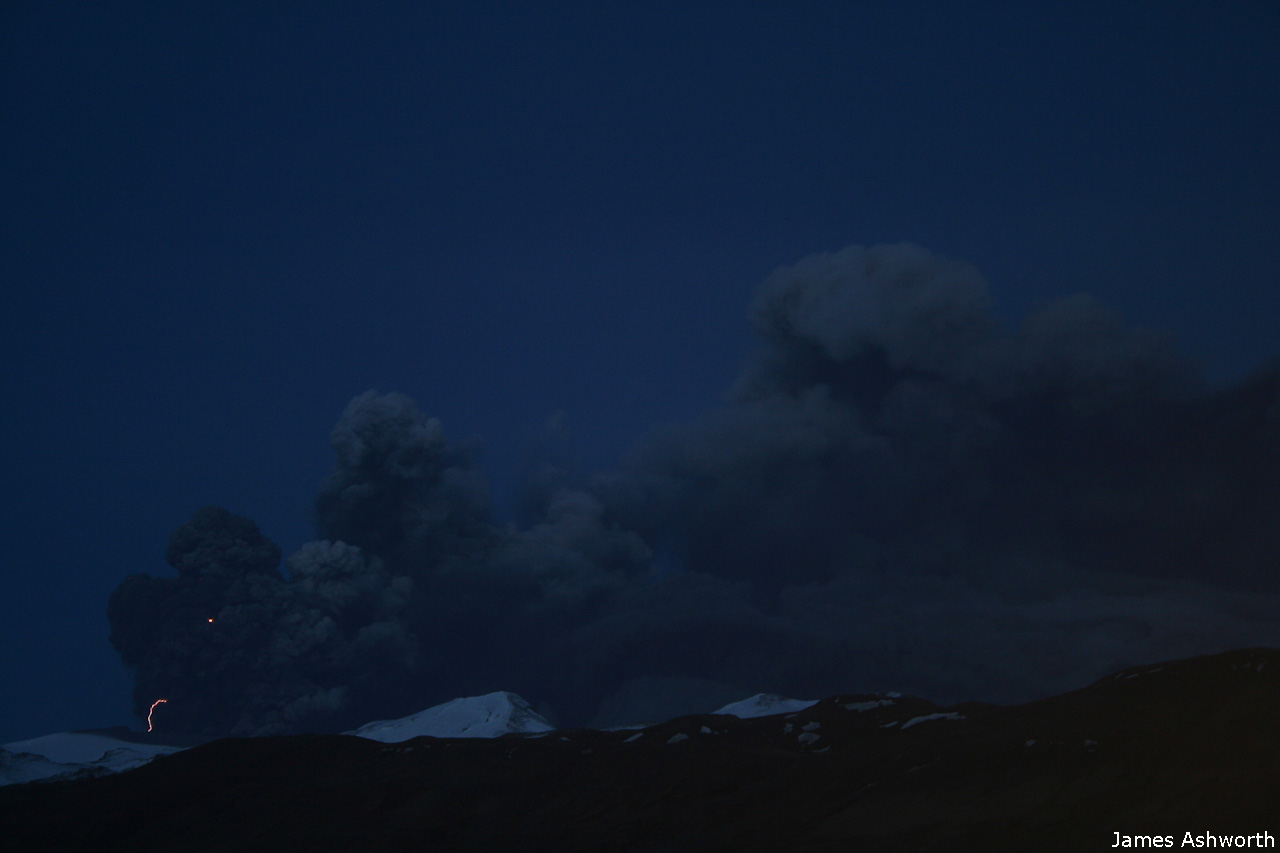 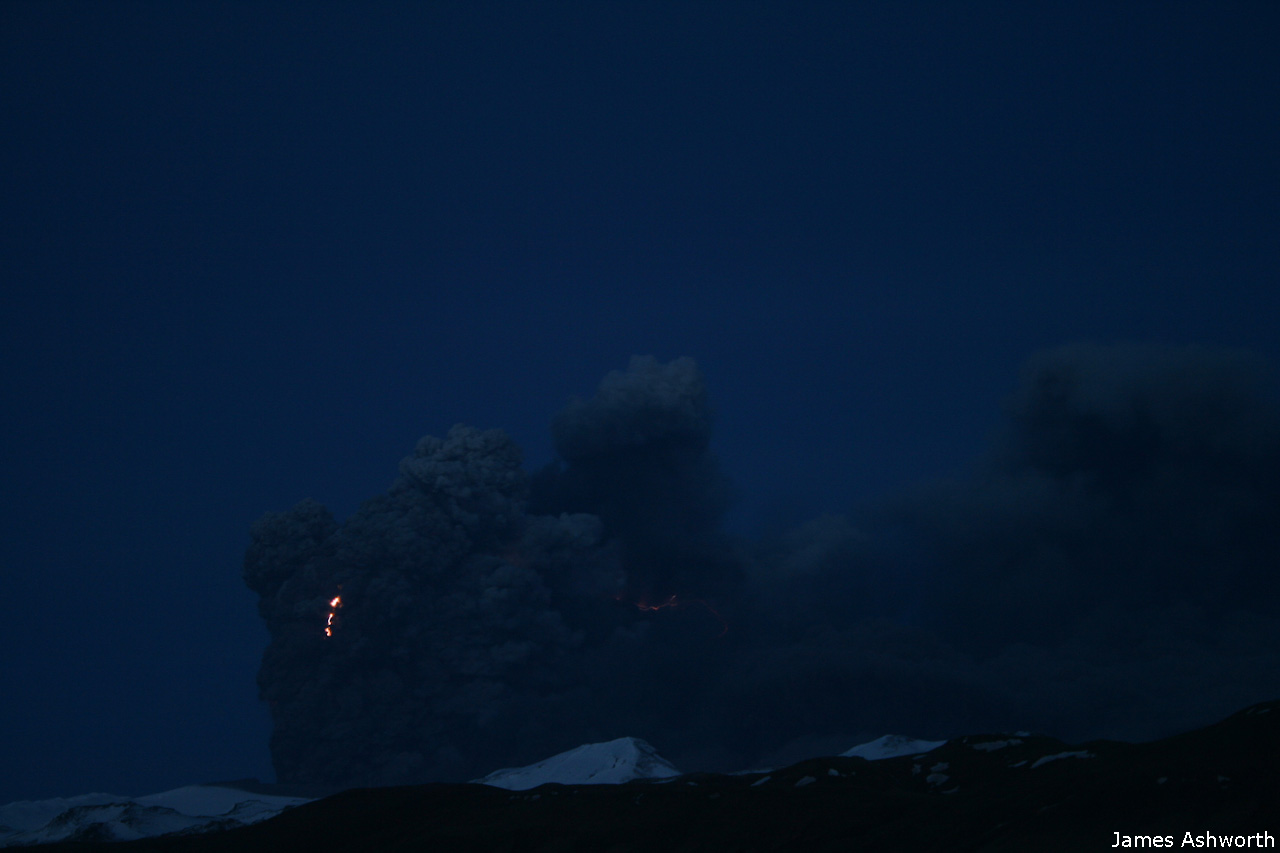 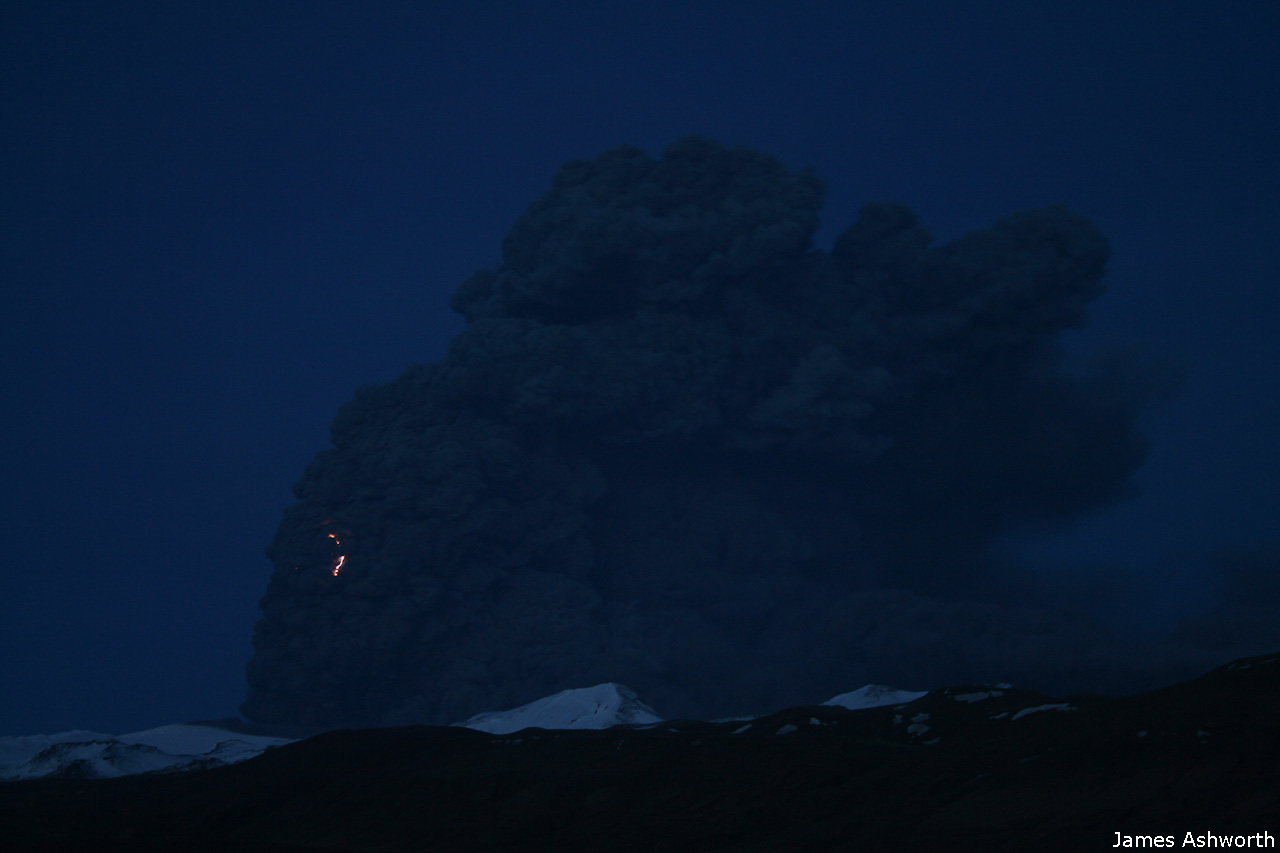 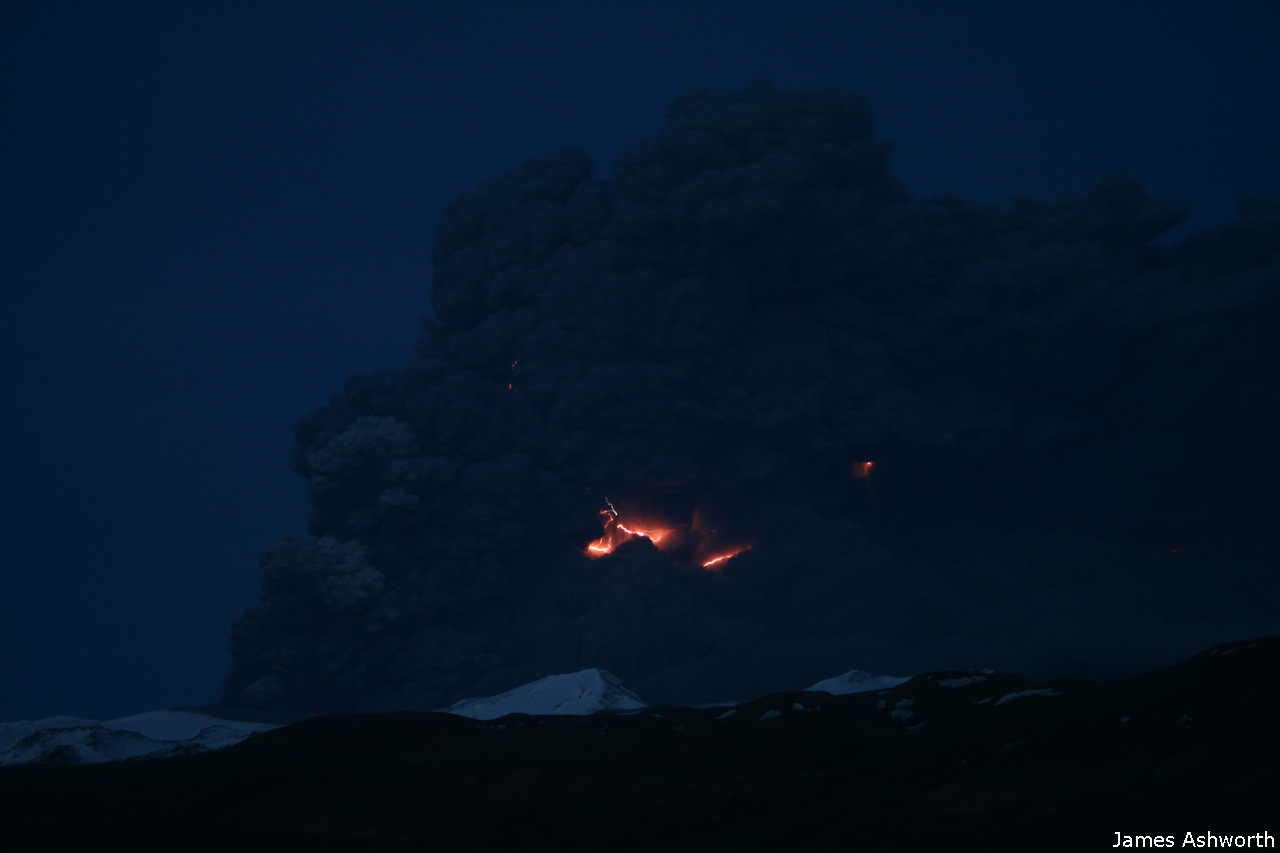 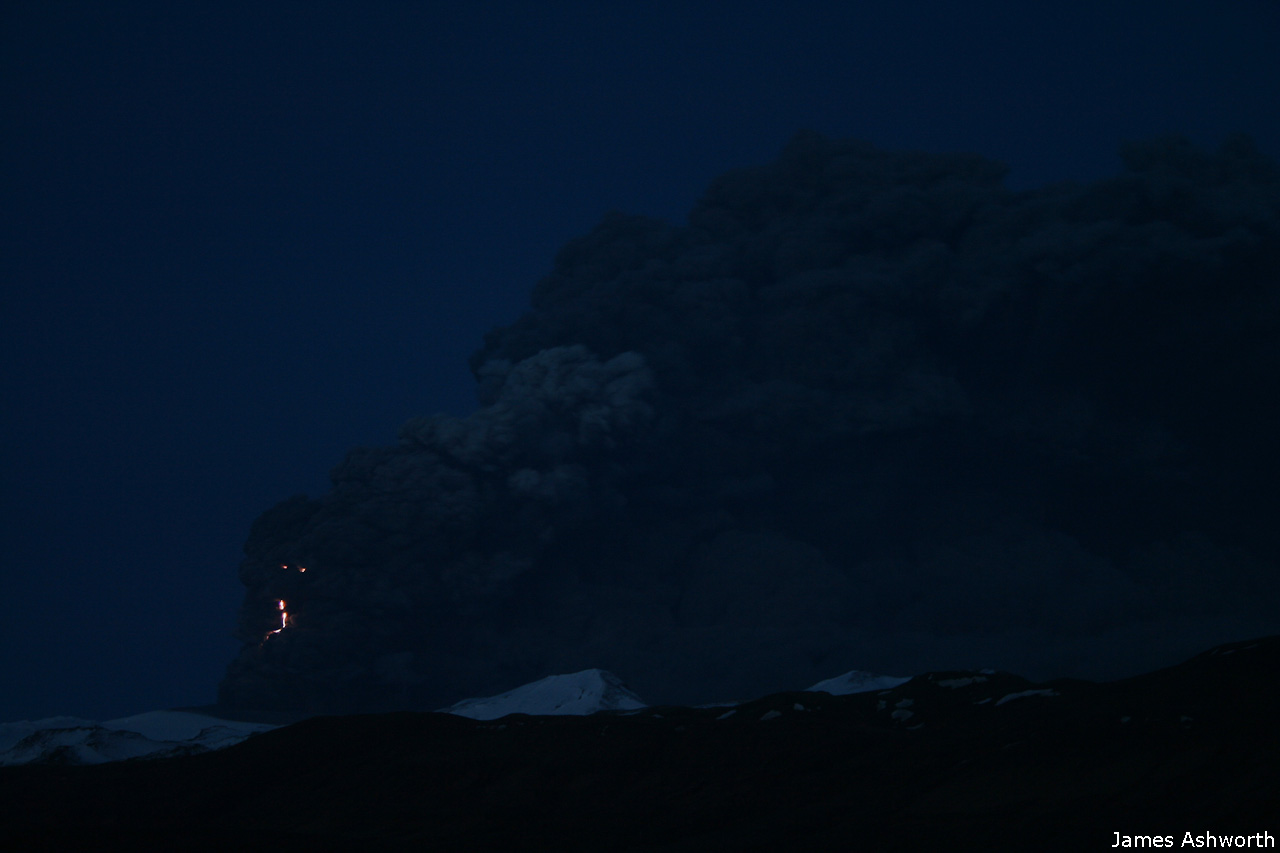 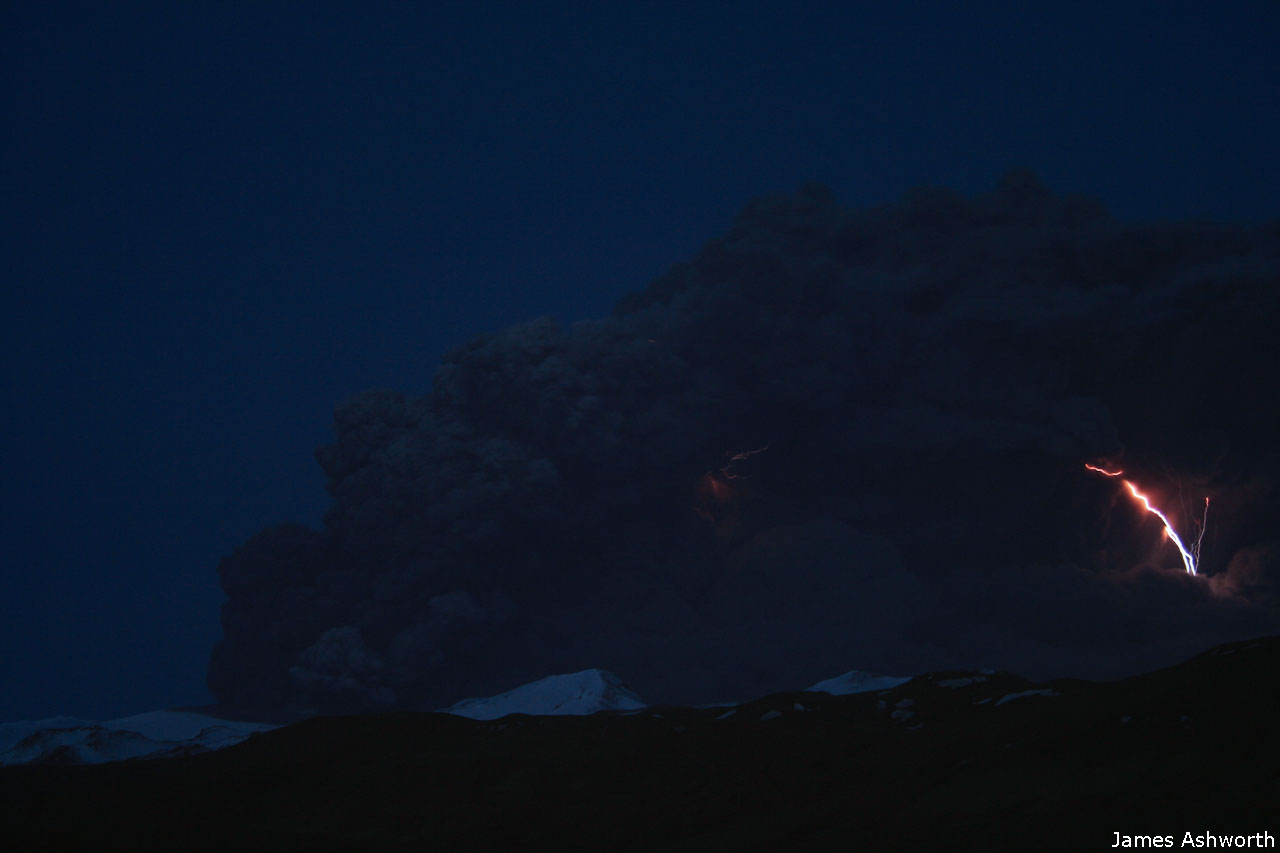