Just when we thought the volcano craze was bubbling down and our Icelandic lives could once again be consumed by IceSave, banksters and corruption, a second eruption started–this time under neighbouring Eyjafjallajökull glacier.

It’s not every day you get to see a volcano erupting. In fact, it’s not every lifetime you get to see a volcano erupting. And we have now had two eruptions in the last month. The latest eruption has kicked up a large cloud of ash, which can be seen sitting ominously above the glacier. Westerly winds have also carried the ash to northern Europe, paralyzing air traffic for the second day in a row. About 17,000 flights have already been cancelled, according to a CNN report. What’s more, nobody knows how long these disruptions will continue, which depends on both the volcano and the changing wind patterns.

Apart from spewing toxic ash and sending off glacial flooding over the southern flatlands, as Grapevine’s resident volcanologist James Ashworth points out, there won’t be much magma action for us volcano hungry types to feast on – at least not on the ground because the volcano is below the glacier and it is far too dangerous to be in the path of potential flooding.

Right about now I’m glad I didn’t waste any time to check out the Fimmvörðuháls eruption, because not only has it stopped erupting, but it was also probably quite a unique opportunity to come within 200 metres of an erupting volcano.

Those who didn’t make it there are probably kicking themselves right now, but thousands of people did make it and many went to great lengths (literally) to do so. Perhaps never before have so many people in Iceland decided to embark on a 30.5-kilometre (19 mile) hike up Fimmvörðuháls from Skógar, which is the way I went. The ten to eleven hour hike was pretty gruelling, especially for people who hadn’t done much moving until the volcano inspired them off their seats.

The hike was breathtaking and well worth the effort. Wedged between two glaciers – Eyjafjallajökull on the left and Mýrdalsjökull on the right – the route meandered up 1000 metres before the volcano showed itself. Although the volcano remained hidden for nearly the entire journey, the hike alone was nothing short of spectacular. It was cold and windy at times, but the sun was shining and the scenery was astounding.

Although it was admittedly an amusement park-like scene with all kinds of rides – super jeeps, snowmobiles, ATVs and helicopters – it was still quite a geologically thrilling experience to stand so close to a fissure shooting up molten rock.

Here is a visual taste of the hike (which pending the course of our new volcano, might not be possible for some time): 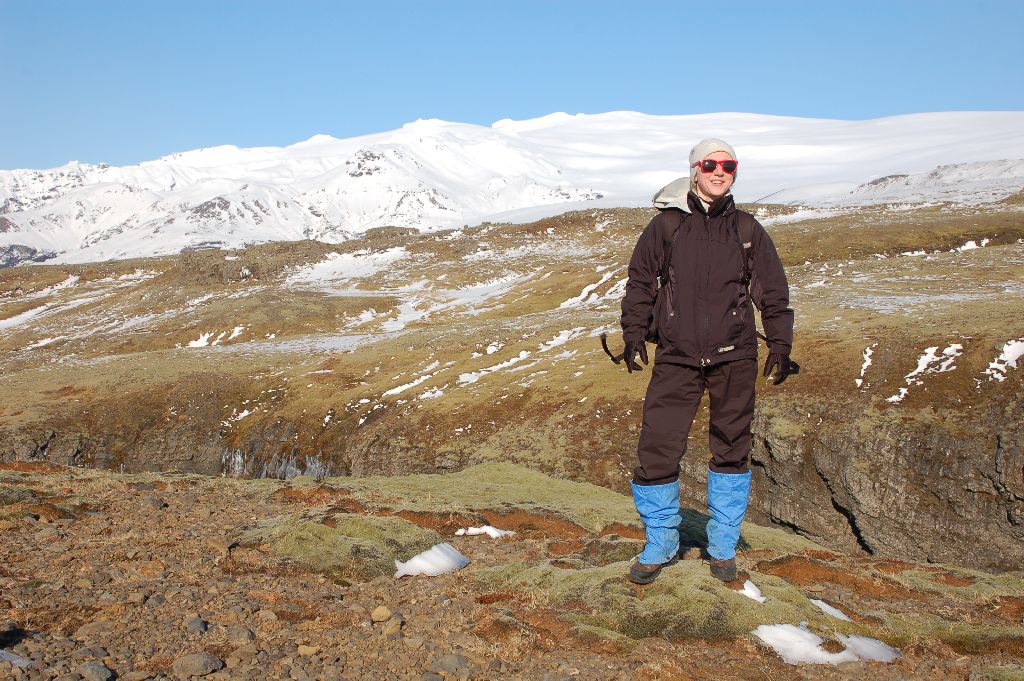 On the way up, showing Eyjafjallajökull in the background. 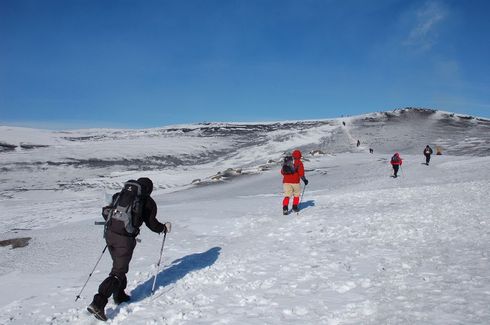 Approaching ash covered snow as we neared the elusive smoke. 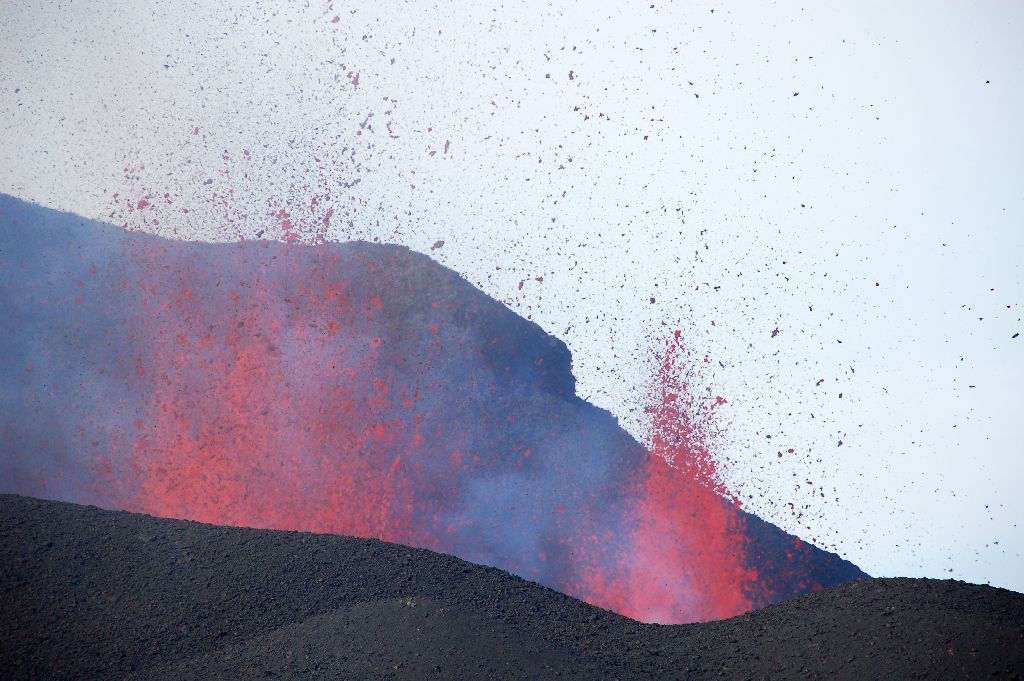 At 1000 metres, the Fimmvörðuháls Eruption. 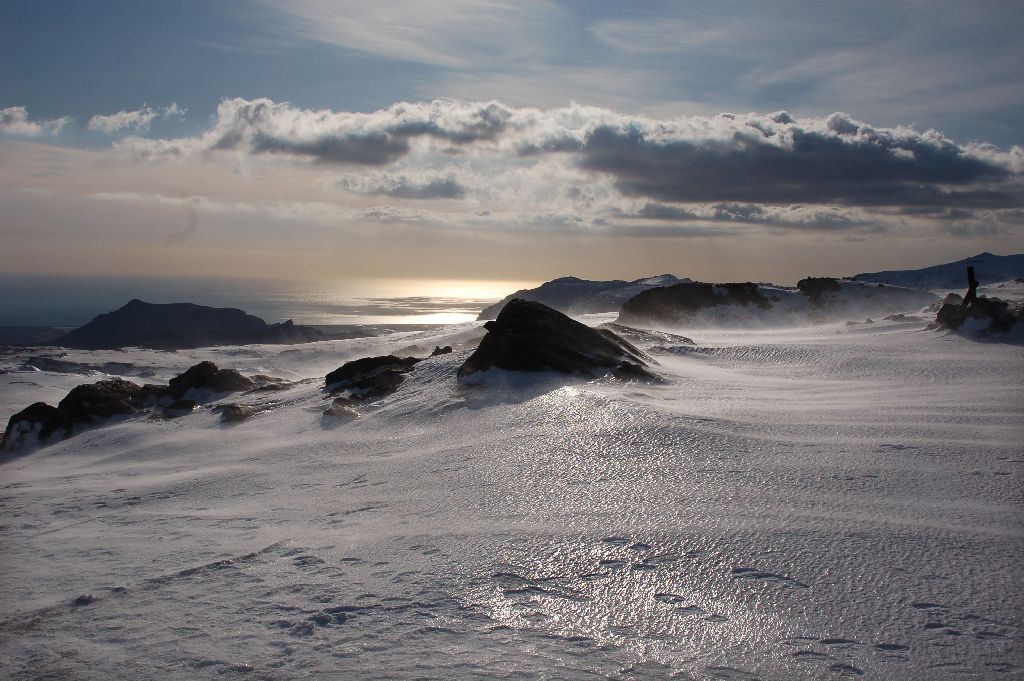 Descending the mountain, overlooking the ocean. 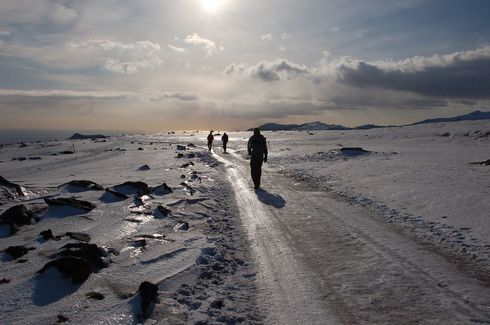 A few hikers following the icy road down. 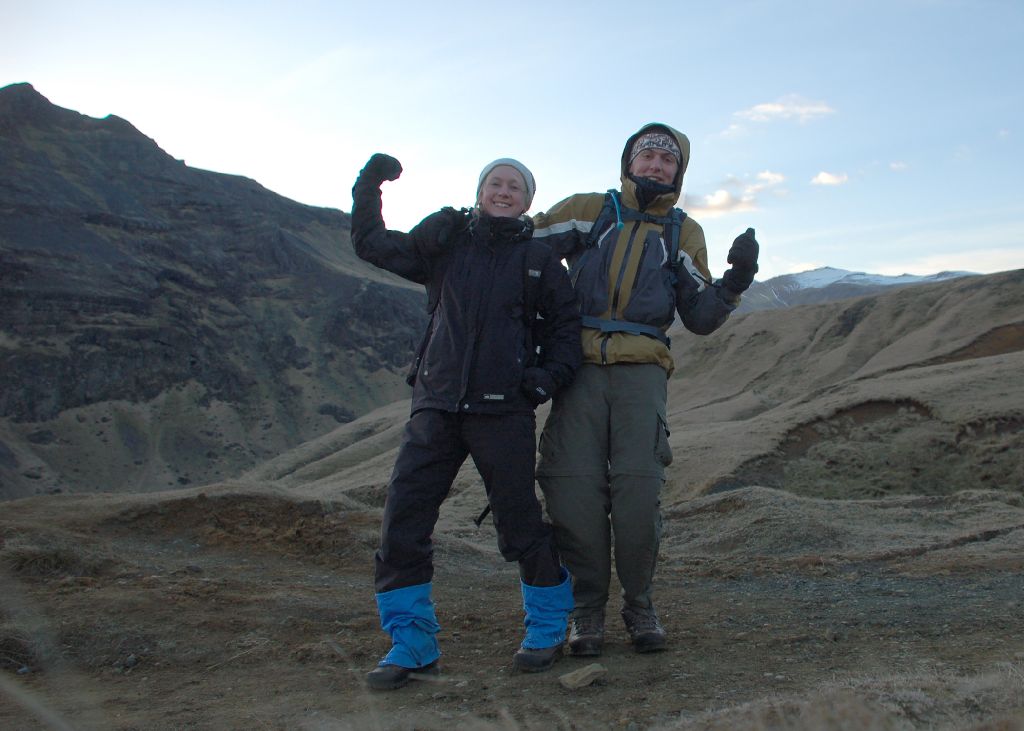 Safety
On a final note, with the new eruption on the horizon, hopefully we can learn from the unfortunate casualties of the Fimmvörðuháls eruption. Far too many people tried to face the fierce winds and frost armed only with a pair of jeans, a light jacket and sneakers. The Icelandic Rescue Team had to lead a number of those people down the mountain – some of whom even showed signs of frostbite. And then there were the two people who lost their way and died of exposure. If being ostracized by the media is not enough to get you to dress appropriately and bring enough food and water when venturing into the mountains, there was your proof that Iceland’s nature is not to be taken lightly.