If you’re based in Southern California, there are a lot of great weekend trips that you can take by car. It’s nearly impossible, however, to compare a trip to Las Vegas or Mammoth or San Francisco to one that involves driving the south coast of Iceland. This is something that occurred to me as I was eating lunch on Mýrdalsjökull glacier. I imagine that the raw natural beauty of these glaciers, waterfalls, beaches and mountains are at least part of the reason that many people visit Iceland.
When you’re driving around Iceland, one of the first things you realize is that anywhere you go that’s outside of Reykjavík is basically the middle of nowhere. This is why I was especially surprised to see a hitchhiker looking for a ride about 30km from the nearest municipality. For some reason I was immediately reminded of the scene from the movie Dumb & Dumber where Harry (Jeff Daniels) says to Lloyd (Jim Carrey), “Hey Lloyd, look, there’s some people who want a ride, too!” to which Lloyd replies, “pick ‘em up!” So we picked her up.
Her English was a little rusty, but after a few minutes we learned that she was from Nantes, France and that she wanted to go to some beach that wasn’t far away. There was a lot of pointing to the map and yes-or-no questions that she had a tough time answering, but we ended up finding the right dirt road to take us there.
At first, I couldn’t get the car door open because the wind was pushing it so strongly in the opposite direction, and then when it was about halfway open the wind almost ripped it clear off the hinges. Cheap Jeep rented us the classic ’98 Toyota Corolla.
It’s not easy to represent the natural elements that I witnessed textually, but the weather conditions on the particular day that I was there made for quite a dramatic display. Breaking all over the huge bay in front of us were 4-5m waves, many of which were crashing violently into the rock cliffs on which we were standing. You had to be careful though, because the 50km/hr winds (that’s my guess) almost took me off my feet a few times. The spray from the waves colliding with the cliffs was also something you had to mind; I learned that the hard way. It was freezing, fiercely windy, rain/snowing, stormy, gloomy and absolutely spectacular. This was the artful and unrefined livelihood that appealed to the human proclivity for nature; this was why people came to Iceland. 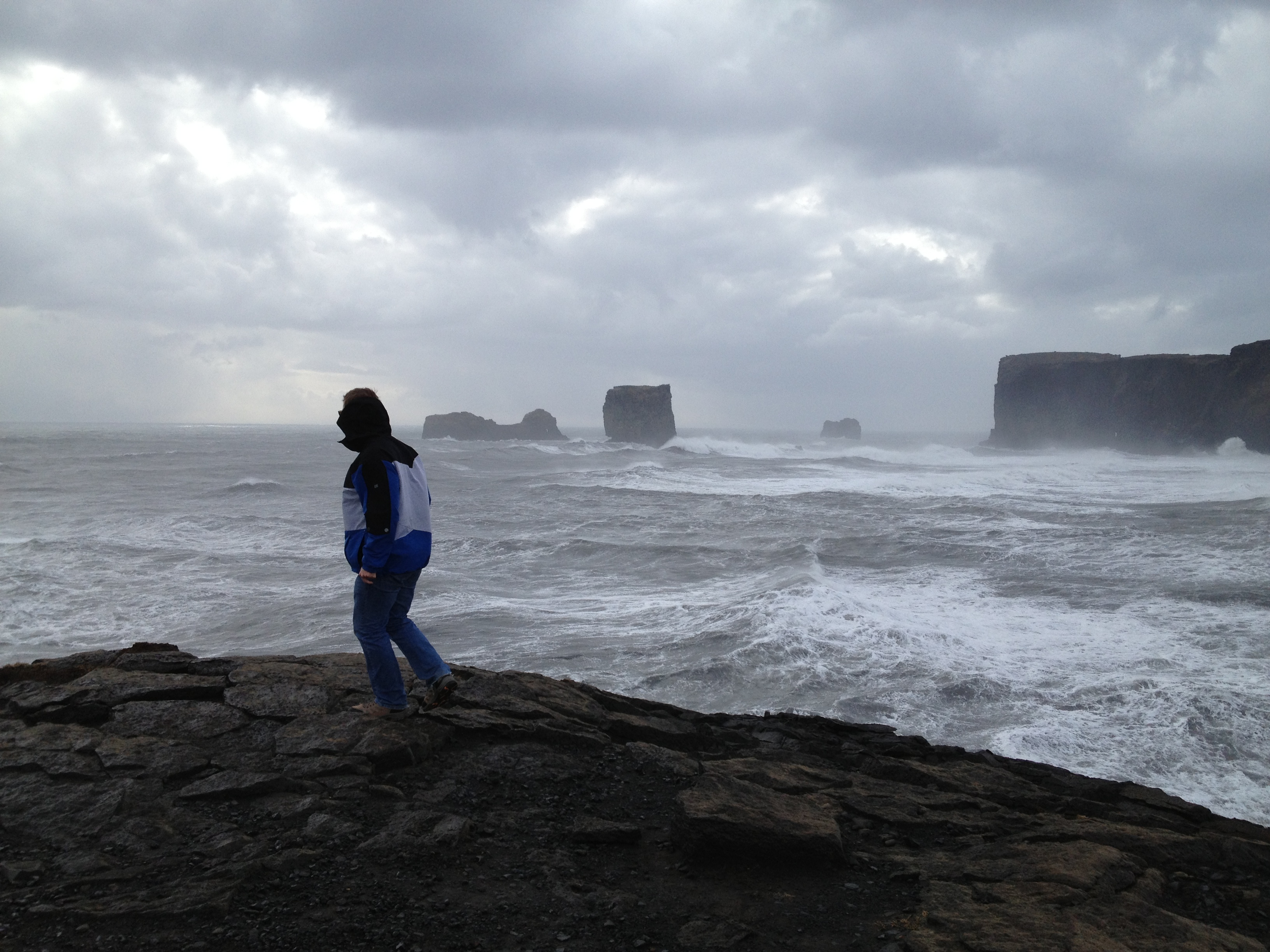 I got back in the car and tried to effectively de-ice my hands. You can’t wear gloves when you’re taking pictures with an iPhone. My face was wind burned and my clothes were soaked but those were the last things with which I was concerned. The next thing that went through my head after, “That was awesome,” was how happy I was with our choice to give our friend from Nantes a ride – without her we would’ve never stopped at what I now consider to be the best part of the trip.
Before I came to Iceland, I had heard and read about the humbling displays of nature, but I didn’t fully understand or appreciate them until I witnessed them in reality. It’s not until you experience them first-hand that you realize that no travel writing descriptions are going to give you a truly accurate impression of Iceland’s extreme natural conditions, and no Google image searches of surfing at Þorlákshöfn or of a blustery Dyrhólæy are going to equate to the experience of braving them. So, if you really want to grasp the violent power of the North Atlantic Ocean, pick an especially stormy day and explore the south coast of Iceland for yourself. And if you see a hitchhiker, by all means, pick ‘em up.