Icelandic comedy films from the 1980s are a staple of Iceland’s cultural life. Most Icelanders have not only seen these films, but also know them by heart. To watch them almost 30 years later can be somewhat daunting though. Many of these films are no longer funny; some are still funny, but represent a somewhat problematic worldview. Others are simply hilarious and are still able to address something real in Icelandic culture. Their longevity is sometimes owed to their cultural significance and their role in the collective cultural memory of Icelanders. What’s particularly interesting is how these comedies used social criticism to build a strong foundation of laughs for years to come.
For the first 80 years of the 20th century, only about twenty feature films were produced for the domestic film market. The Icelandic film industry was virtually non-existent and creative screen artists had to find their outlet in television or abroad. In the late 1970s funding finally became available through the Icelandic Film Fund (IFF) and in 1980 a few feature films were produced and screened in Icelandic movie theatres. The production of these films marked an important change in the Icelandic film industry and the event is commonly referred to as The Icelandic Film Spring.
In the years that followed a few Icelandic films were produced every year. Thematic and stylistic tendencies were established and progressed rapidly during the 1980s. A common theme in the spring-films was the conflict between the more old-fashioned agricultural society and the modern city life developing in Reykjavík at the time.
This theme echoed a trend that could be traced back to mid-century Icelandic literature and reflected the identity crisis of a newly independent nation coming to terms with its new role in the international (or at least Western) community.
Films in tune with British sex comedies also flourished. Men were usually placed at the centre of the narrative, relentlessly pursuing women for sex. The earliest films of Þráinn Bertelsson are an excellent example of this tradition. Women were rarely at the centre of the narrative, but repeatedly presented as objects, often shown naked for no apparent reason. Obviously, many of these films ignored the significant social changes Icelanders had seen in the previous decade. Women’s liberation had taken place. In the 1980s women demanded (and had become legally entitled to) equal pay. Funded childcare had been established and an all-female political party was founded and participated in parliament from 1983–98. 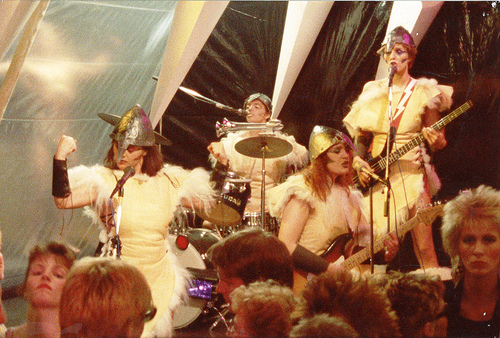 On top
Although many comedies (and most films in general) focused on the male experience, a couple of mainstream films focusing on women and addressing questions of gender and gender roles were produced in the 1980s. These films are ‘On Top’ (Icelandic: ‘Með allt á hreinu’) and ‘The Icelandic Shock Station’ (Icelandic: ‘Stella í orlofi’).
Ágúst Guðmundsson’s ‘On Top’ (1982) is a play on the battle of the sexes and displays the confusion of the male members of pop band Stuðmenn when the women in the band refuse to take to their orders and form their own band called Gærurnar (“The Sluts”). The rivalry is ignited when the romantic relationship of the two lead singers falls apart after a power struggle. Stuðmenn is presented as a conservative and unimaginative band while the members of Gærurnar are cool, use slang and play cutting-edge punk rock. Gærurnar, whom the audience is more likely to favour, are driven by obvious artistic integrity. Stuðmenn, on the other hand, seem jaded and are unable to find their creative force until challenged by the women.
When explored in a wider context, ‘On Top’ represents gender related changes in Icelandic culture. New trends in music and cultural life also play an important role as women are shown actively taking charge of their lives and not only making their own music, but also making more modern music than men. Women’s liberation is successfully pared with radicalism in the film. Importantly, the film also presents the often-ignored male identity crisis as the traditional social hierarchy is deconstructed and rebuilt in favour of equal opportunity. ‘On Top’ is also part of a persistent discourse in popular music culture on the dichotomy of the established musicians versus the new and vibrant ones. Although the film may be very funny and poignant to a non-Icelander, the symbols of Icelandic culture might be hard to decode without an extensive knowledge of Icelandic culture and language. 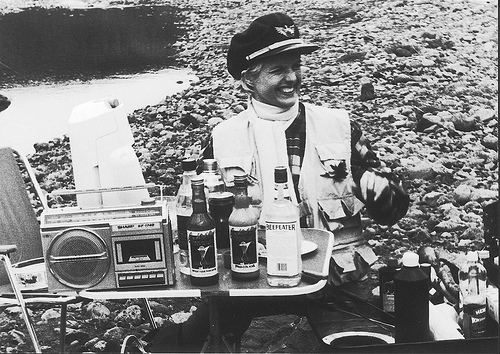 Stella
The story of the resourceful housewife Stella, in ‘The Icelandic Shock Station’ (1986), is one of the most popular films ever produced in Iceland. Stella takes her children on a vacation while her alcoholic and adulterous husband is confined to a hospital bed after a freak accident. Stella hilariously takes charge of the situation and hijacks his plans of taking a foreign business associate fishing and accidentally kidnaps an unsuspecting Swede whom she thinks is her husband’s fishing partner.
The film is directed and produced by women, Þórhildur Þorleifsdóttir and Guðný Halldórsdóttir, respectively, and focuses on the female experience in a society where women’s independence is definitely encouraged, but still very conditioned. Each time Stella breaks the rules she gains inside knowledge of male culture. In an early scene she fixes an electronic device and meanwhile overhears a group of men discussing their infidelity and other indiscretions. In another scene she denies her drunken husband sex, which results in him burning his buttocks and breaking both his arms, thus opening up an opportunity for Stella to go fishing with his alleged business associate. Her take-charge attitude and positive disposition allows her to tap into powers previously unknown to her and explore a way of life she never knew. Like the women in the all-female band in ‘On Top,’ Stella’s most truthful expression stems not only from her autonomy, but also from her actions that relate with the recent changes in contemporary culture in Iceland.
Both films give the Icelandic women’s rights movement a voice while also addressing important questions regarding gender and identity—for both men and women. It is important to note that the women’s liberation movement is not only a formal institution of feminists and bureaucrats. It is something that resides in anyone partaking in cultural life and therefore everyone can relate to it on some level. One can speculate that the popularity of these films is to some extent due to their humorous yet profound connection to social reality.