The Nature Of The Experiment

Imagine if you had to hike across the Alps with a heavily stuffed backpack. Now imagine you had to climb steep cliffs along the way, still carrying your equipment. Finally, imagine taking a large red boat weighing approximately 200 kilograms with you.
Sound crazy? Yes, of course it does! But this is precisely what the German artists Thomas Huber and Wolfgang Aichner did for their exhibition “passage2011,” which includes the boat itself, a short film and several photos shot during the performance, and is currently on display at the National Gallery of Iceland.
When it comes to viewing art, we are often looking for meaning, and like most artworks, “passage2011” offers a lot of room for interpretation. With the continued melting of glaciers due to climate change, one might be inclined to see the boat as a metaphor for the huge meltdown, for the heavy burden we all have to carry, but that is of course just one possible interpretation. “We know people are always trying to read between the lines,” Wolfgang Aichner says, “and it can be seen as some kind of protest for environmental matters, but this is not how we thought about it at first.”
Born on a windy glacier in Iceland
Actually, the origins of their project can be traced back to Iceland, twenty-five years ago when the two German friends were hiking Vatnajökull for the first time. On one hand, the trip ended in a total catastrophe: they found themselves trapped on the windy glacier. On the other hand, it was a success: this was the moment that their art connected to glaciers was born. “It was quite an intense experience,” Thomas Huber said. “This is why our artworks are intensive experiences as well.”
The experimental performance “passage2011” was structured like a drama and this is also how it is displayed: the short film is made up of three different acts—the prelude, the climax and the denouement, which can either materialise in a catastrophe or in an apotheosis, the glorification of the protagonists.
“The whole project builds up to the last act,” says Christian Schoen, the curator of “passage2011, “and for us, there was no doubt that it had to come down to a fatal ending.” Failing is not forbidden, as it is part of human existence. And that is the basis of the project. 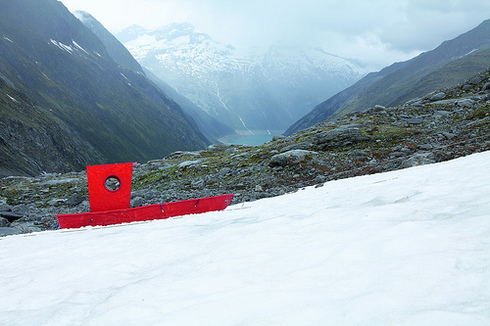 Was Sisyphus actually happy?
The boat itself plays a number of roles in the project: it is an artwork as well as an instrument with a purpose. It also reminds exhibition visitors of the Sisyphean challenge Wolfgang and Thomas faced.
As the story goes, Sisyphus was eternally doomed to carry a stone up a mountain, just to repeat the task as soon as he was finished. Although this sounds horrible, the famous concluding line of Albert Camus’s ‘The Myth of Sisyphus”—”One has to imagine Sisyphus happy”—suggests otherwise. Displayed in the opening scene of the short film component of the exhibition, the quote suggests that Wolfgang and Thomas must, like Sisyphus, have achieved some peace of mind when he was able to stop thinking about his fate and focus on the task at hand.
However, this was not entirely the case. “Of course the artists started reflecting at a certain point,” Christian says. “This is why human existence is destined to a catastrophe rather than an apotheosis.” This statement has a very personal touch, as soon as you start looking for the origin of Wolfgang’s and Thomas’ action-arts, namely the incident on Vatnajökull.
Return to Vatnajökull
The incident 25 years ago, which inspired “passage2011” in the Swiss Alps, continues to drive the artists who have returned to Iceland to work on a new project called “Powerwalk. Going for a charge.”
This time they plan to hike Vatnajökull again, using the wind—once their fatal enemy—to generate electricity. They’ll do this by wearing small, self-made wind turbines on their backs to collect the produced energy in special batteries, which in turn will be used for powering two washing machines after their homecoming.
Once again Wolfgang and Thomas will combine art, adventure and creative innovation, seeing themselves as action-artists experimenting with the loss of contact to reality due to an extreme glorification of one’s own deeds. It is about achieving something that at first seems to be impossible.
In the end, it’s about the dialectic
When it comes to their new project “Powerwalk. Going for a charge,” the artists say they are a bit more politically motivated. “We were driven by the rather cynical idea that we could take energy from Iceland to power the rest of the continent,“ they explain.
They are referring to the real plans of importing green energy from the North Atlantic island to the UK, which they believe to be a dangerous move due to a lack of consciousness of environmental matters in continental Europe.
Nonetheless, Wolfgang and Thomas do not see themselves as protesters and the core ideas that lead to the “Powerwalk” are the reprocessing of the incident 25 years ago in combination with creative power, innovation and the lust for adventure.
So, it is not about moralising and pointing fingers at other people, but about making them reflect on these issues themselves. Art has always been dialectic and this is the purpose of “passage2011” and “Powerwalk. Going for a charge.” 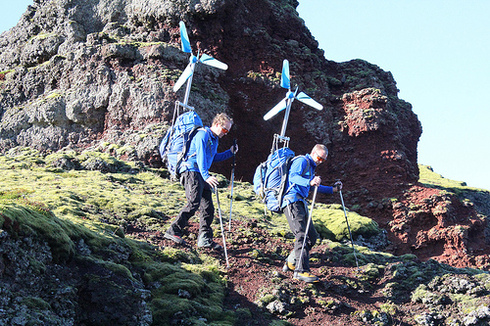 —
“Passage2011” involved the artists pulling a red boat across the Schlegeis Glacier in the Alps. A resulting exhibition, which contains a short film and photographs shot during the crossing, as well as the boat itself, is displayed at the National Gallery of Iceland until October 27.
For their new project, “Powerwalk. Going for a charge,” the two friends are hiking up Vatnajökull with small, self-made wind turbines on their backs. The energy that is produced this way is going to be stored in special batteries used for powering two washing machines after they return.
You can follow their new project, “Powerwalk- Going for a charge” at www.powerwalk2013.org.