The Writing On The Wall

It’s not street art if it’s in a gallery. “I definitely don’t want to exhibit street art in the white cube,” Sara Riel says, “one of the fundamentals is finding the right spot, it’s part of its nature.” Sara has been working in the streets since the early 2000s when she moved from her cosy hometown Reykjavík to study art in Berlin.
“When I went there you could not escape the scene—Berlin was bombed with graffiti,” she says. It was at the East Berlin Art School Weissensee that Sara met Nomad, her soon to be partner in crime: in creative, stimulating, city-beautifying crime. “It was a mad life with Nomad,” she recalls, “it worked because at that age I didn’t want to be in the quiet peace of a studio. I wanted to be outside, playing, engaging with people.” 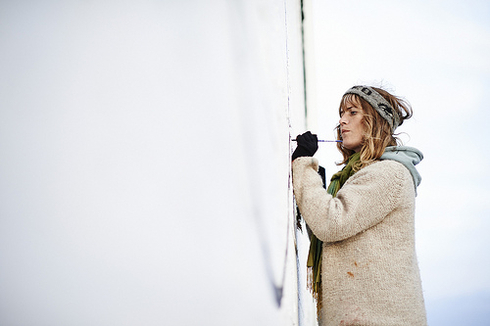 Practice what you preach
In the grand scheme of things, the mania was worth it. Sara’s style is distinct; her works are detailed and well executed. Of course, it isn’t just about precision; it’s about the practice and the process. “A lot of what we did [in Berlin] was total trash, just a bunch of crap put down. But it taught me to be more light-hearted about mistakes. There’s a feminine tendency that I had to overcome—that ‘everything has to be beautiful, everything has to be perfect’—being around the boys taught me a lot. They taught me to just go for it.”
There is a lot to learn in the realm of street art, but it’s not going to happen through traditional pedagogy. “I’ve been asked to give lectures on street art, and things like that” she says, “but it shouldn’t be learned like that. It’s something you learn by getting out and doing it—copy others, find your style, get better, build your street credit—it’s not something to learn academically.”
White cubes aren’t  just for squares
Sara’s love of the outdoors is not mutually exclusive with exhibiting indoors. “It’s not a story that goes ‘from the streets into the national museum,’ like most people might see it as,” Sara says, “A lot of people know me from the streets because that is where my art is most accessible, but I love to promote visual art in any form. Especially in Iceland, where going to the museum isn’t as popular as it should and could be.”
Sara’s current exhibition at the National Gallery of Iceland, ‘Memento Mori,’ is a tribute to the “just go for it” attitude that she picked up after years of exhibiting in the streets. “I got this opportunity and I just had to do it. No one was paying me to do it, I completely ruined myself financially and was working 15–16 hour days, and in the end I completed the grand mission.”
Despite all of her hard work, and its stunning products, she notes that there are still those who are sceptical of the government sponsored artist salary. She discusses the sentiment of museumgoers, who think “I could do this.”  “No you couldn’t!” she says, annoyed, “a lot of people don’t realise how much work is put into art, even the simplest pieces. They don’t realise how 24-7 this job is.”
But Sara’s exhibit attacks the indifference of museumgoers that upsets her so much. After three years of brainstorming, researching, and creating, ‘Memento Mori’ brings together two of Sara’s loves: nature and art. “Nature themes in art are like love songs in music,” she laughs, “a classic. That was part of the challenge that I enjoyed.” The pieces themselves steer far clear of clichés. Memento Mori combats the traditional aesthetics of Natural History Museums (and points out the “embarrassing” absence of one in Reykjavík). She notes that with the advent of portable internet sources—iPads and iPhones and etc.—information, which traditionally takes precedence in natural history displays, is made available outside of the exhibit. “I’m not saying we don’t need the information there, but we have more freedom to play around with the way we present it now, we can make it more stimulating in every sense.”
Her exhibit serves as a prototype of her vision, gracefully playing with the visual presentation of scientific information. A projector loops ground-up shots of dancing florals in the corner. A shelving unit holds vials of various plant specimens labelled in Latin, a comical display of our attempt to impose order upon the least orderly thing of all, nature. Beautifully layered collages of scientifically illustrated moths and butterflies are pressed up in huge frames. At the doorway to the exhibit, a familiar friend greets visitors—a framed drawing of the same mega-mushroom that reigns over Hverfisgata. 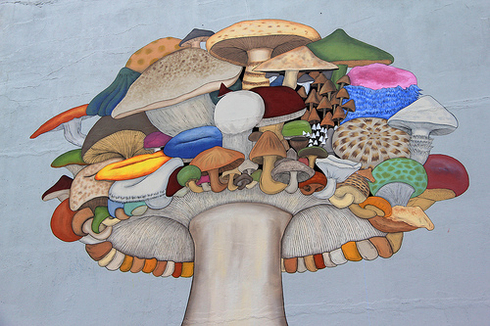 One-way street
Of course there are technical differences between street art and gallery art—the time frame, the materials, the audience, to name a few. But regardless of the space it ends up in, Sara approaches all of her work with equal seriousness. “To me, taking it seriously doesn’t mean it has to be profound and intellectually serious,” she clarifies, “serious just means giving it your best. Pushing your mind and pushing your limits, criticizing yourself and then taking it past that criticism. By taking it further you usually find a way outside of the frame.” And frames are something that Mrs. Riel will never let herself be confined by.
“I wouldn’t take street art into the gallery, but I will take fine art into the streets,” she says. “I really believe what goes around comes around.” The statement harks back to Berlin, always for creation, never for destruction. It was about making the environment more human-like, she mentions. “It’s important to respect your city,” she says with emphasis, “always give it your best. You never know where your artwork is going to take you. If it’s done with integrity, then most of the time it gets you a ticket somewhere.” Let’s just hope it’s the right kind of ticket.
—
See Also:
Reykjavík’s War On Graffiti