Listen To Your Art

Over the bustle of the LungA lunch buffet one morning, Marteinn Sindri Jónsson sat with stick-like posture, listening to the sounds of the cafeteria “without bias,” as he put it, just like a microphone would. Earlier that day, his radio workshop “Waves of Ether” had done a similar exercise in an abandoned factory, sitting in silence for ten minutes in order to ‘tune’ our ears: to prepare them for optimal hearing. Coming out into the rainy, fog-spotted morning, we listened with renewed clarity to the background sounds we were used to tuning out: drops of rain tapping the ground, a faraway waterfall, the shuffling of rubble, the crinkling of fabric.
In many ways, the details of LungA—a young artists’ festival held in Seyðisfjörður every July for over ten years now—are best captured in just such a way. The festival is a compilation of weeklong workshops spotted with lectures, concerts and performances of various kinds. But LungA is also composed of small elements not boldly listed in the festival’s programme. The festival is defined by details that go unnoticed until they’re gone—until the party’s over and our ears have adjusted to the silence. 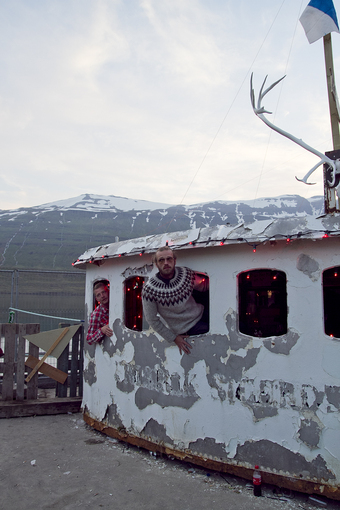 1. A cardboard box full of frozen fish, sliding across the back of a gutted van.
The fish belonged to a local Bistro in Seyðisfjörður, the van belonged to a bartender at the Bistro, our free-of-charge taxi driver over the mountain from the main hub Egilsstaðir to the isolated Seyðisfjörður. It’s an easy hitchhike over the hill, because there is only one road that leads to LungA. Basically, if a car is driving on this road, that car is going to Seyðisfjörður.
2. A steady stream of coffee, and the gurgle of the container’s last drops.
The well-being of its participants was paramount for this festival. Everybody was provided with shelter and sleeping pads, three meals a day, and of course, plenty of coffee. In the main hall a group of volunteers collaborated with cafeteria staff to keep the nutrients, and the caffeine, flowing.
3. Sharp creaks of wind hitting corrugated metal, dull thumps of hammers hitting wood.
Sounds destruction and construction littered the side of the road through Seyðisfjörður, where workshops took place. One didn’t necessarily have to be involved in a particular workshop to be exposed to the process of creation over the week of LungA. Next to the red schoolhouse, a participant in the “Expansion of the Oscillators” workshop drills holes into her homemade woodwind instrument. Up the road a “Personal Spaces” participant saws two-by-fours to build a self-standing sun structure. Down at the harbour, a pirate group reclaims wooden pallets and fire bins, giving them new purpose as a fully functioning bar patio come Saturday.
4. The constant roar of water.
One way in, and one way out. It’s like Willy Wonka’s chocolate factory. Instead of ominous smokestacks and dry concrete walls, though, Seyðisfjörður is separated from the outside world by a winding mountain pass that snakes between half-frozen lakes, rushing waterfalls, and vibrant slopes of green. At the bottom of the switchback mountain road lies Seyðisfjörður, every bit as fantastic and whimsical as the inside of Wonka’s factory. Waterfalls cut through the mountainside and spill out underneath the town into the fjörd.
5. Wool.
Okay, it’s more of a feeling. But it is worth mentioning because it is a feeling so distinct to music festivals in Iceland. Back in my native California, the “feeling” of an outdoor music festival is something more along the lines of sweaty, sleeveless arm-skin sticking to you, forcing you to move as the crowd moves. Here in Iceland, the only discomfort comes from knowing that the sweater you are starting to frizz was probably knit by the wearer’s mother. Sorry ma.
6. The crunch of cans being kicked across the gritty cement.
On Saturday night LungA was abruptly shaken awake by it’s own advertisement as a “youth festival,” and kicked up both the “youth” and the “festival” for a seven-act concert. Two stages faced one another at the edge of the fjörd, separated by a boat-bar that was spontaneously constructed over the course of the week using only found materials (including the boat). The harbour’s walls were smothered in graffiti, a string of patio lights swung from the boat-bar’s mast, and flags of shredded fabric fluttered overhead. Coupled with a thick fog that changed colours as festivalgoers set off tinted smoke bombs, the scene was both apocalyptic and entirely charming at the same time.
From July 14–21, 2013 the East Coast village of Sey›isfjör›ur opened its doors, doubled in population, and hosted the convergence of these details. The result was a festival unlike any other breed of festival in Iceland. As long-time LungA participant Goddur put it: “there is a certain spirit here that is difficult to explain for those who haven’t experienced it…It’s like trying to describe a sexual climax to people who have never had a sexual climax. Sey›isfjör›ur is a creative sexual climax—you just have to experience it to understand it.” 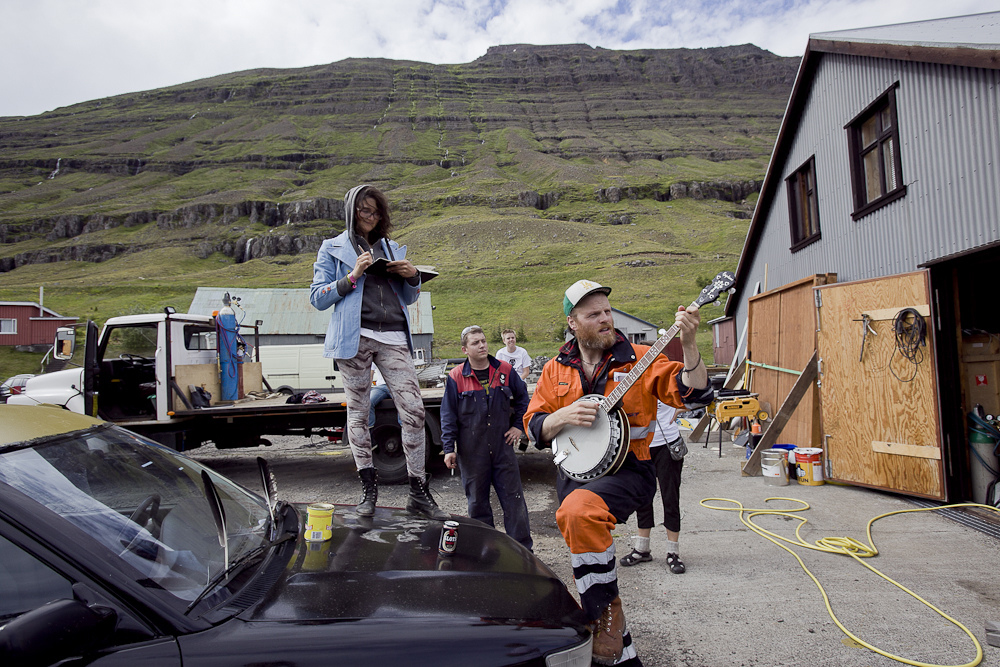 —–
Kicking It New School
By Parker Yamasaki
Anyone who has attended LungA will confirm: the spirit of the festival lives on long after the last confetti flutters into the fjörd. In 2010 that sentiment was strongly felt, and an idea was pitched to foster that spirit throughout the year. Three years later, Jonatan Spejlborg Jensen and Björt Sigfinnsdóttir stood with pride in their eyes in front of a lecture-hall of festival attendees to announce the materialisation of that idea, the LungA School. It’s what Jonatan describes as the “ambitious offspring of the festival,” a symbiosis of playful LungA spirit and a little bit of pedagogy.
LungA school is the first of its type in Iceland. In December 2012, the school received funding from the Ministry of Education and Culture, and according to Jonatan they are still engaging in a healthy dialogue. With its inauguration, Jonatan hopes that they can help open up the system to more small, private and creative educational opportunities in Iceland.
The ideals of the school are adopted straight from the festival. “The experience is the first part of the whole learning cycle,” Jonatan explains. The curriculum focuses “less around theory as the foundation and more about theory to support the experience.” Do first, reflect second. Like the mild-mannered cousin to the “it’s better to ask forgiveness than permission” approach.
The ‘experience’ that LungA school promotes is realised through workshops that run every other week during the four-month semester at LungA school. “In creating arts, the final piece becomes static,” he continues, “but the process itself is super interesting to dive into. It’s not your ability to form a piece of art when you get here that is important, it’s your will and curiosity to explore a given medium.” He references a couple of the workshops going on inside the festival, as we speak. “Look at the dance workshop, for instance. There are really professional dancers in there alongside some who have never danced at all. Both of them are picking up a lot of experience, a lot of valuable experience.”
The LungA School is now officially accepting applications, and the doors open for the first time on March 10, 2014 for a 4-week long “beta-session.” Applicants must be 18 years or older. Fall semester runs August 25–December 9. You can find the programme, curriculum, and more information about LungA school online at their website.
—
Flights to Egilssaðir provided by Air Iceland, book flights online or call +354-570-3000.