“Flott fjörd!” announced our driver as we pull into Stöðvarfjörður. It was the first exchange of words we had the whole trip. He spoke no English, the only thread of communication tying us together was our own crinkled paper sign that read “Stöðvarfjörður,” and a matching label on a pack of newspapers sitting in his front seat.
To get there from the airport in Egilssta›ir one relies on a series of ad hoc busses and the generosity of strangers. Our route in particular was made possible by two boys on break from their rental car company, a small red bus shuttling long-haired sleepy men to a metal festival a couple fjörds away, and the local newspaper delivery man.
You don’t need to know where you’re going in Stöðvarfjörður to find the festival. Just follow the only road into town, and stop.  On the right side of the main drag there is a community centre covered in fresh stripes of teal and blue, a graffiti project taken up by the local kids for the festival. Just across the road a dim beige sign beckons passers-by with the promise of hot food, groceries, and souvenirs. And just beyond that rests the diamond-in-the-rough old fish factory. The highest wall reads “HERE” in neon orange letters, confirming your arrival.
When we arrive in the early evening of July 12, it is as if the festival has awoken sleepy Stöðvarfjörður from an eight-year long nap. She shakes the scruff out of her hair and jumps up, spry with potential. Before arriving I worried that importing the art and music scene from Reykjavík to a town of 190 would be invasive, and unwelcome. I could not have been more wrong. It was clear from the moment we pull back the creaky, sliding doors of the van that collaboration was central to this festival.
Nourishment for the collaborative  spirit (aka horse meat sandwiches)
Two wooden tables and a grill were posted beside the community centre. On one sat a mixed arrangement of pots, each filled with a different soup.  In tiny glass jars we sampled a salty vegetable soup, fish soup, carrot soup, and something having to do with sweet potatoes. On the other table a tinfoil tray offered steaming horsemeat sandwiches, fresh off the grill and wrapped in triangular pita pockets. Topped with cocktail sauce.
Feeling full and warm from the inside out I started to work my way back to the campsite for some comfy layers. Meanwhile, down at the harbour, a performance art piece had begun and a flood of faces urged me to turn the other way. I obeyed and headed to the water just in time to catch two women in a rowboat covered in a mesh sheet float around the harbour for about ten minutes. No one seemed to know if this was the performance or not. The women docked and everybody turned toward each other, conversation continued casually. What we had just witnessed was still unclear, but no one minded as the weather was nice, beers were plentiful, and a DJ had started blasting some sounds in front of the old fish factory.
De/Construction
My first genuine introduction to the fish factory came from a graphic designer and graffiti artist named Narfi. Narfi was passing through Stöðvarfjörður with a group of friends under the collective name RWS. Aside from dousing the plain walls with vibrant designs and thoroughly enjoying themselves, the group was in charge of leading the local kids in visually renovating the community centre. Narfi was eager to show off the factory’s interior—thriving on creation as much as destruction. A 2,860 square-metre work in progress.
The entry room gives the impression of a young museum, complete with houseplants and a false snake. A “gift shop” welcomes visitors with fluttering price tags and a full-length mirror. Just around the corner, empty doorways reveal fluorescent rooms full of recycled and reclaimed supplies—dripping and crusty paint buckets, brushes and spray cans, tools and wooden cut outs. There is no distinction between the deliberate and the scrap in the fish factory. Everything has a purpose.
Upstairs, a lounge area has been carved into the room by the strategic placement of some couches and an ashtray. A kitchen welcomes visitors with a handcrafted jukebox and a coffee maker. A man they call Smári walks up to the jukebox contraption and throws on some tunes. Smári made the jukebox himself. He is the official un-official carpenter/handyman/jukebox constructer of the factory. 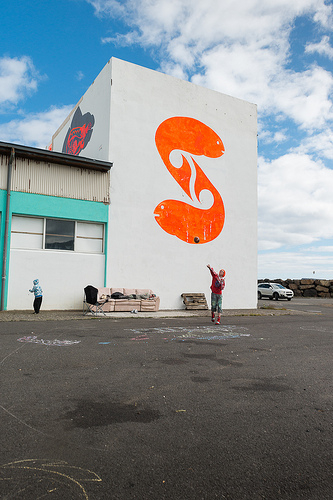 A little too quiet
Just outside, beneath a massive mural of two neon orange fish, there is a once-pink couch, faded to nearly white by the sun. It’s here that I first meet Rosa and Zdenek, the couple who ambitiously purchased the
factory back in 2011. Rosa pops up to introduce herself, bubbling with pride and alcohol. They laugh and mingle with the festivalgoers, youthful spirits with mature aspirations.
Before they bought the fish factory, Rosa and Zdenek lived quietly up the road in Stöðvarfjörður. “We were running our own company called MupiMup. We recycled things, industrial waste and scraps and turned them into art,” Zdenek explains. “We had very sweet lives,” Rosa laughs, a spark appears within them as they reminisce about the calm before the
factory. MupiMup lives on as both a company and concept. “I guess we’re sort of doing the same thing with the fish factory project,” Zdenek says, “we’re recycling the building.”
“But things got very lonely a lot of the time,” Rosa explains. “Saturday nights we were like, ‘should we go visit mom and dad, or do origami?'” she jokes. “You should have seen our New Year’s Eve,” Zdenek elaborates. “We were standing outside at midnight with our glasses of champagne. There wasn’t even a cat in the street. Nothing.”
The story is all too common for the small villages in the area. When the government instated the individually transferable quota system on the fishing industry, Stöðvarfjörður less-than-willingly handed their quota over to a company called Snæfell, with the understanding that the right to harvest the local fishing grounds would no longer be in their hands, but would remain in their town. But eventually, as the story goes, the small company was bought out by Samherji and the fishing quota was relocated. The day the fish factory closed, 34 people lost their jobs, and Rosa was one of them. In less than a year from that so too went the post-office, then the bank. “They pretty much killed the town,” Rosa recalls.
Enter the void
The fire was smouldered, but never fully extinguished. In 2005, the factory closed. In 2010, the municipality decided that the building was to be demolished. It had been inactive and uninhabited for six years, the roof was peeling off, the walls were crumbling, and it was just plain unsightly. In stepped Rosa and Zdenek. After a year of planning, presentations, and loads of paperwork, the couple bought the abandoned factory for 100,000 ISK.
The road to obtaining the factory was just as rickety as the road into Stöðvarfjörður. “To them we were just two guys with loads of ideas.” Rosa says, “it took us nearly a year to convince the municipality that we weren’t just crazy hippies.” They came up with project proposals, budgets, models and projections. They were granted and denied. “With these big projects they want plans, they want to see how you’re going to make money, and when you are going to make it. That is, if you’ll make it immediately or not,” Zdenek says with slight annoyance. “It’s hard to come up with these projections when you’re not doing it for the money,” Rosa says. “It is so square” Zdenek agrees. Eventually the couple won the support the officials, and more importantly, the support of the community.
The town of Stöðvarfjörður has been immensely supportive of the Fish Factory project and all of its extensions, like Pólar. “It’s such a brilliant example of community” Rosa says proudly. “Like last night at the concert in the community centre, I looked around and there are little kids, people my parents age, and my former teachers all in there dancing along with the people here for the festival.” 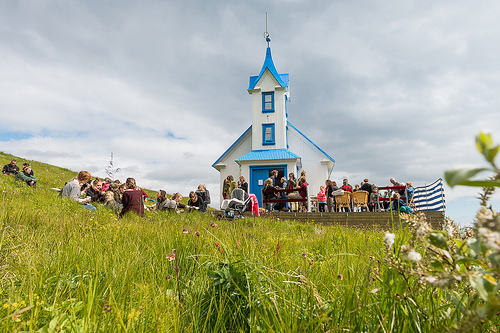 All hands on deck
On Sunday afternoon, nearly everybody in the town gathered on the front porch of the old church for brunch. A day prior Inga, a resident of Stöðvarfjörður for forty years, led a workshop gathering native herbs and moss. The group used these gathered goods to make a creamy soup and a variety of freshly baked breads. Inga’s all-natural delicacies were complemented by pancakes grilled on the spot and served up, one by one.
Food and feasts sewed a common thread between the festival and the town. Salvaged goods brought in from Reykjavík by Pólar were complemented, even outshined, by the contributions of the locals. Friday’s potluck was followed up on Saturday by a mid-day rhubarb feast in one local’s backyard. That evening a group of local fisherman cut and grilled 140 kilos of fresh fish that they had caught that morning, with the helping hands of about twelve festival attendees. The fish feast was accompanied by stuffed grilled peppers from Reykjavík and heaps of fresh salad prepared by Inga’s herb group. Creamy moss soup and sugar-filled pancakes sweetly capped the weekend.
As the sun comes out and the crowd scatters to the town below, Inga unfolds a patio chair and sits down next to me. She is very happy with the festival. “Reykjavík comes in with the music and the art and everything, and we come in with what we know; I collect herbs, the fisherman come in with the fish…” she trails off and closes her eyes in the beaming sun. “So good—the weather, the people, the food, so good,” she repeats in perfect content, and then dismisses herself to clean the dishes and join her sister inside the old church.