I can’t believe I am in front of the silent, even beautiful, volcano Eyjafjallajökull. You’d never know the chaos it wrought three years ago. Today it’s a powder blue sky winter day. I’m here with my nine-year-old, Veronica. She remembers I was stranded far away once and I remind her it was because of this volcano’s ash.

We’re about 120 kilometres outside of Reykjavík, a lovely drive on Route 1. Our tour of south Iceland includes volcano stories, perhaps inevitably. Restless Iceland is covered in volcanoes that erupt on average every four years.

Eyjafjallajökull, meaning “island mountain glacier,” is one of Iceland’s 30 active volcanic systems. It awoke in February 2010 and touched my life, worrying me but making me feel alive. The eruption was preceded by thousands of small earthquakes that volcanologists monitored closely.

“Icelanders would come watch it. It was amazing spectacle, especially in dark,” our guide Helgi Jón Davíðsson says.

When it erupted I was in Uganda, checking my flight on the Internet. I was confused to read that Schiphol airport in Amsterdam, my transfer airport to Canada, was closed.

I could never have guessed this eruption “shut Europe’s skies,” causing a knock-out effect globally. Nobody knew how long it would take for the ash to clear. Airports were crowded with people fighting for flights. I crisscrossed Africa catching planes home.

The family farms cattle but since 1960 it also grows grain crops. On their centre’s sign is a 2010 image of that same red-roofed farm but with ominous billowing smoke pouring from the volcano.

“People were evacuated for three days to a nearby village. They were allowed to return once daily to check their animals. They drove into a wall of darkness; ash: they could only see three to four metres in front of the car,” our guide tells us. “An extremely fine material landed on everything. People had to really clean their houses when they returned.”

Iceland was minimally affected. Keflavík airport only closed for six days while millions were stranded in Europe and beyond. Apart from inconvenience and financial loss, there was little suffering overall. 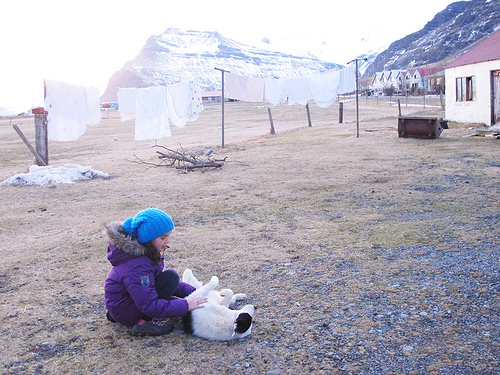 Disaster or acts of nature, depending on magnitude, can also bring opportunity. At the Centre and along this road shops sell bags of ash. Veronica picks up two pitted liquorice black lava rocks and puts them in her pocket.

Helgi Jón says, “Nearby is Hekla, it is a very active, powerful volcano. At the time of the 1104 eruption people knew nothing of geology. They thought hot things were from hell, the devil.”

Hekla has had at least twenty eruptions since 1104.

We drive towards Vatnajökull, Iceland’s largest glacier. Our guide says, “That’s Katla.” It is in the distance. I feel he is wary of this volcano. Is it my imagination or do we speed as we cross its path? Helgi Jón says “Katla” as if fears speaking its name, like Harry Potter’s villain Voldemort. Eyjafjallajökull’s eruptions are reportedly followed by Katla erupting, its “Angry sister.” Katla’s 1918 eruption produced five times the soot of Eyjafjallajökull. Since 2010, Katla only had a minor sub glacial eruption.

“It will erupt; it is a matter of time. In July 2011 there was a little flood following a small eruption that washed the road away. We are going over a temporary bridge,” he says. Helgi Jón’s tone is also one of respect for nature.

Some past eruptions caused horrific flooding, famine and catastrophe. Skaftáreldar in 1783–1784 blew and produced a 580 square kilometre lava field. Eruptions created icebergs the size of multi-story buildings, crushing and flooding all in its wake.

All we can see crossing the massive field in our minibus is lava soil. We also visit a remnant of a crushed bridge from a 1996 eruption and flood.

“You can read Iceland’s history in the land,” Helgi Jón says. “We are driving over lava from the 1784 eruption.”

Now we’re in the lava desert. As sun is lowering, we walk on endless black and brown lava from old and new eruptions.
Veronica marvels at Helgi Jón’s story of how hard it was for people and horses to cross lava. Now moss grows on the rocks like carpet, but it’s still a moon-like and jagged walk.

If any nation adapts to change, it’s Icelanders. They live with Mother Nature’s beauty and beasts.

“Now we have high tech seismology and know about moves in the earth’s crust,” says our guide.

Eyjafjallajökull’s message to me is that we must expect the unexpected, be alert and take better care of the Earth, regardless of nature’s plans. Keeping ‘death over your shoulder’ can mean awareness of immorality and doing meaningful things, like taking this trip.

Veronica writes in her made-in-Iceland Tulipop journal. The cover is the cartoon character Gloomy. “Gloomy is daring, adventurous and above all brave. She lives at the base of the Jam-Jam volcano,” the description says.

Veronica can imagine this as we stay at a wonderful farm in Hali, amidst volcanoes. The next day she hikes fearlessly across the spectacular blue Svínafellsjökull, a nearby glacier tongue.

“You’re brave like Gloomy,” I tell Veronica. She smiles.

In Reykjavík we stroll on Skólavörðustígur street. Veronica admires the volcanic rock jewellery.

Icelanders live with volcanoes. We all do.

SPONSORED
Icelandic Trans Woman Comes Forward On Sexual Assaults And The Culture Of Objectification Of Trans Women
SPONSORED
Into The Glaciers: See Them While You Can