Erró At 80: Still Not Wearing A Tie 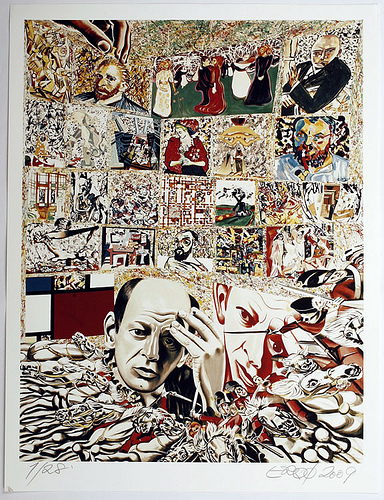 The Background of Pollock, 1966-1967, glycerophtalic paint on canvas,
260 x 200 cm. FNAC, Ministère de la culture. Centre Pompidou, Musée
national d‘art moderne, Paris.
This is one of Erró’s most important portrait paintings, really a novel and original method of relaying the subject’s story. Again Erró cuts together different times and spaces, connecting Pollock’s artistic premises—expressionism with Van Gogh and Munch at the helm—furthermore granting us an insight by clashing two portraits of Pollock in two different colours, in Pollock’s subconscious. Pollock was very preoccupied with the notion that art should be spontaneous and that it should flow from the subconscious without restraint. In this piece, Erró manages to tell Pollock’s artistic story.
‘Foodscape’ (1964)
(Moderna Museet, Stockholm) 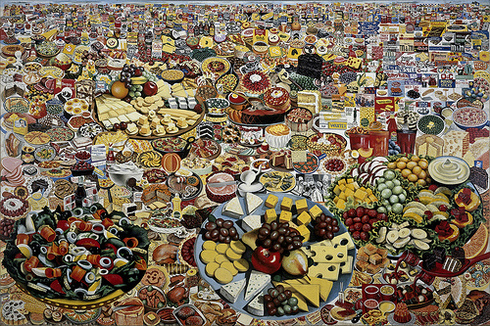 Foodscape, 1964, glycerophtalic paint on canvas, 300 x 200 cm. Moderna museet, Stockholm.
This is the first of the ‘scape’ paintings, where Erró depicts a multitude of similar things. It is a visual meditation on the excessiveness of society’s consumption habits, but first and foremost an original composition that has marked Erró a special place within pop art. It is also fun to keep in mind that Erró himself consumed all the food he portrays in the piece.
‘New Jersey’ (1979)
(Listasafn Reykjavíkur, Reykjavík) 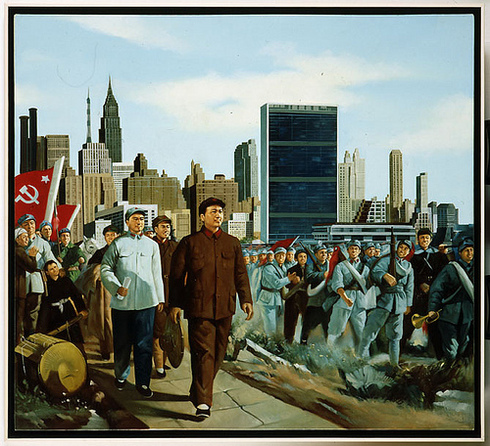 New Jersey, 1979, oil on canvas, 90 x 99 cm.  Reykjavik Art Museum, Reykjavik.
The series of pictures on Mao travelling the world is a product of its time regarding the politics. But the work’s artistic value lies in how Erró, using his collage technique, can cut together different times and realities. This series was a “fiction” that invoked hope and warmth in the hearts of many, or induced a great terror. Furthermore, the work well describes the artist’s witty humour. As Erró himself remarked: “Mao only once went outside of China’s borders, to Moscow. I sent him on a trip around the world. I took him to Venice, Paris, New York. I made him a great traveller.”
‘The World today’ from the series “Maybe later”  (2011)
(Listasafn Reykjavíkur, Reykjavík) 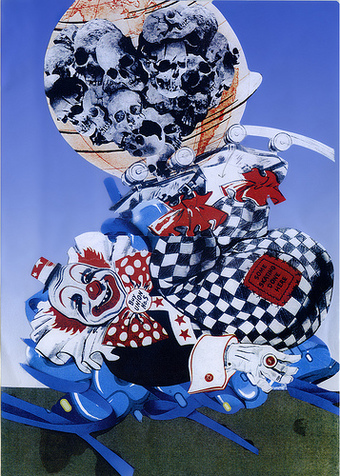 The World today, 2011, glycerophtalic paint on canvas, 99 x 70 cm.  Reykjavik Art Museum, Reykjavik.
This is a painting that Erró recently donated to the Reykjavík Art Museum, along with the collage it is based on. By contrasting a few different photos Erró manages, like he often does, to create a strong, visual piece that consists of humour and social critique.
‘The Queen Of Speed’  (1970)
(Private collection, Paris) 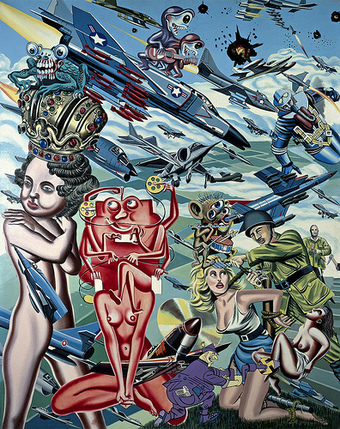 The Queen of speed, 1970, glycerophtalic paint on canvas, 162 x 130 cm. Private collection, Paris.
This has clear origins in the collage technique, which allows Erró to create a very original storytelling method through the medium of painting. This painting isn’t one tableaux or linear narrative; Erró spreads images and fragments over the picture plane, in a very dynamic manner in this case, without resorting to a hierarchy of objects or images. The viewer controls and steers the reading process by the meanings she places in every image or fragment. In a certain way, the viewer is floating in a dreamlike world as he slides from one field of meaning to another. This narrative method instils in the piece a plethora of interpretative possibilities.