Hooray! We turned ten this year. For a humble street rag like Grapevine, turning ten is a pretty big deal—we barely expected to make it to ten issues (and, indeed, all of our contemporaries from the Reykjavík’s street rag market have long since bid farewell… miss u, Undirtónar!).
To celebrate our decade of existence, we thought we’d get a little introspective and reprint some choice articles from the past that are for some reason significant, accompanied by commentary and even updates. Call it a “blast from the past” or “a look into the dark cauldron of time” if you want to—we call it fun. Thus, for ten issues, expect a page dedicated to a year of Grapevine’s existence, starting one issue ago, with a look back into magical 2003.
This issue is a look at 2008, our sixth year of existence when Steinunn Jakobsdóttir was assistant editor of The Reykjavík Grapevine. Read on for some reflections from Steinunn.
The year 2008 can be remembered for many things. Bobby Fisher died in his Reykjavík apartment, Icelandic peacekeepers got trapped in a life-threatening carpet-shopping trip on Kabul’s chicken street and Ólafur F. Magnússon became the capital’s fourth mayor in only two years following an unbelievable turn of events that led former Grapevine editor Sveinn Birkir Björnsson to describe city politics as “an absurdist play where Machiavelli waits for Godot.”
Iceland Airwaves celebrated its tenth anniversary, Reykjavík was it by a record-breaking heat wave and Björk and Sigur Rós organised and headlined the ‘Náttúra’ concert in an attempt to help save Icelandic nature. We at the Grapevine joined the fight with our very own Nature-themed issue, co-edited by some of Iceland’s leading environmentalists. 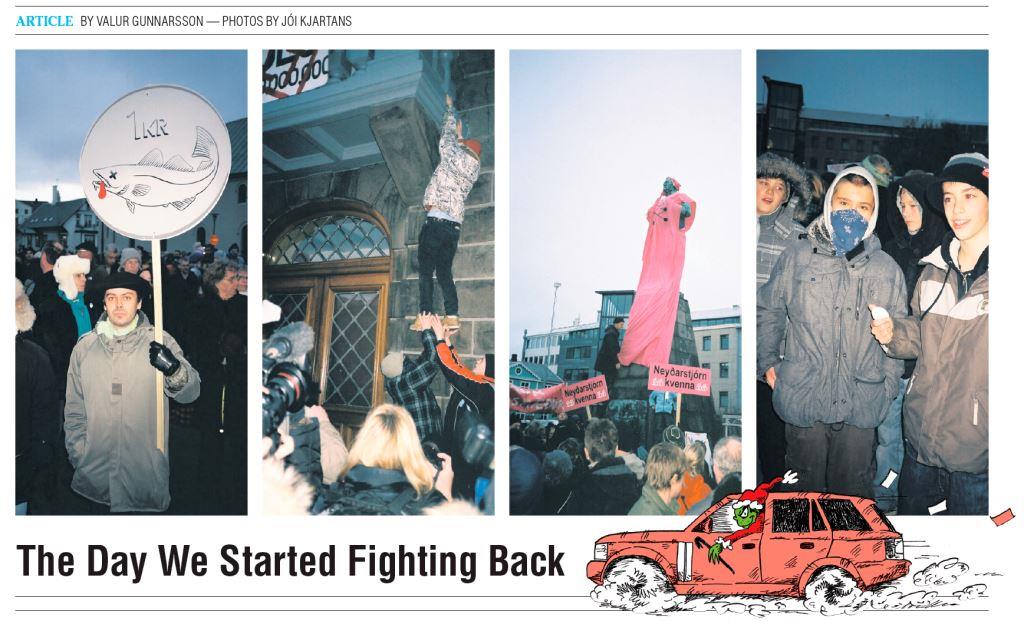 However, on October 6, all of those events seemed to turn irrelevant, and the year 2008 will go down in history books as the year the Icelandic financial system came crumbling down and our then prime minister Geir H. Haarde asked god to bless the nation. The party was over.
There is no need to remind you readers of the political turmoil that followed. The Grapevine welcomed you to “Icelandistan” and tried to grasp what the fuck had happened. At this time, I had just moved to Dublin to study and experienced the crisis a bit differently. Like the rest of the world, I watched from afar as the banks collapsed one after the other, my meagre savings turned into pennies overnight and a pint of Guinness became a luxury.
I remember that my professors found our small island highly intriguing and were much more interested in discussing the Icelandic króna than IMF’s stronghold in Africa. Suddenly, everyone was an expert in Icelandic economics and not afraid to express their opinion. I was proud to tell the teachers about my fellow countrymen who stood up, and armed with pots and pans, marched down to Austurvöllur square every Saturday to demand change. The birth of this interesting movement was nicely covered in a story by Valur Gunnarsson “The Day We Started Fighting Back.” ‘Búsáhaldabyltingin,’ try to pronounce that, professor!
The nation went through stages of mourning—denial, anger, depression—but eventually, got back up and accepted that things wouldn’t, and probably shouldn’t, be the same again. It had been a great party, but now there was time to clean up the mess. At the time, I didn’t expect the Grapevine to survive nor did I realise that the credit crunch and the global news coverage of our situation proved to be a massive boost to our tourism industry. Walking down Laugavegur five years later, the city centre has never looked livelier and thanks to the Grapevine Appy Hour, beer is affordable again.
Cheers to life in moderation, cheers to our tourists and all their money and cheers to another ten years of The Reykjavík Grapevine!
—
See Also:
Remembering Bobby Fisher I
Remembering Bobby Fisher II
The Machine Is Deaf