Twenty Thousand ISK Gets You An Illegal Strip Dance

A thickly set man sitting by the stairs leading to the VIP Club nods as I pass him on my way up from the ground floor sports club called Home. Once upstairs, I pass a man in his forties who is on his way out as I go inside, through the heavy blinds, which serve as a door to the club. Six scantily clad women sit around the bar table, and a seventh serves as bar maid and presumably matron of the establishment. The dark wood and black leather interiors are illuminated by a series of tacky red lights. The women greet me with warm, but contrived, smiles. Rhythmic pop and RnB tunes play softly in the background.

I had spent the afternoon preparing so as to not reveal myself as a journalist on a quest to discover whether or not illegal stripping was taking place at the club. I had watched episodes of ‘The Thick Of It,’ re-enacting the mannerism and accent of some of the actors. I trimmed my beard, donned the suit I had worn daily to work in London, spit shined my shoes and ironed my shirt. Finally, I had drunk a smooth double Glenlivet whisky as I rehearsed my cover story, calmed my nerves and stopped my hands from shaking.

Meeting Lisa
I step forward to the girl closest to me, a blonde woman who looks to be in her late twenties, and we have a quick chat. She seems eager to please, giggling at what I say and responding in a flirty voice. I ask to see the menu, and the matron hands over a single laminated A4 sheet. There are six or so drinks on the menu, and the lower half simply says “private time,” with times ranging from 15 minutes for 20,000 to 1 hour for 60,000 ISK. I ask for 15 minutes, and the matron asks me “with who?” I ask the blonde woman what her name is, and she says Lisa, from [eastern European country].

I pay the matron in cash and she asks me where I’m from. I tell her England, and she tells me they get a lot of English guys. They also have English girls, she tells me, but they weren’t working that evening.

Lisa leads me upstairs to the top floor. A small dance floor is beaming with disco lights, but six curtained-off booths that look to be 2×5 metres in dimensions occupy the majority of the space. She takes me into one of the booths and I sit down in a leather sofa. As soon as the curtains are drawn, she starts dancing.

The clothes start coming off…

She has long hair that hangs down past her shoulder blades, and is wearing a black top that almost meets her stockings and knee-high leather boots. It takes all of my acting prowess to smile back at her as she starts rubbing up against me, climbing over the couch like a cat begging to be petted. I ask her what we can do together tonight. “We can have a lot of fun tonight… if you want,” she responds. “You can stay hours, we can drink champagne. What do you think about that?” “I think I would like to see you naked,” I reply. “Yeah, really?” she says. “I would,” I say.

She straddles me, and puts my hands on her. If there was a look but don’t touch rule in play, then Lisa wasn’t playing by the rules. She then stands up and takes her dress off slowly, revealing matching black lingerie. Every question I have is met with either a flirty giggling answer or a confused look as she takes a moment to understand what I’m asking. She then takes off her bra, but only after stating that she’s the boss and dictates what happens.

I ask her if she gets this naked for everyone or if I’m just lucky, and she says with tongue in cheek “no, usually I don’t do topless.” But she assures me her boss doesn’t have a problem with her doing it, and that I wouldn’t get into trouble. She keeps dancing, rubbing her breasts in my face, and climbing over me. I ask her if she has a shaved pussy. She tells me it’s shaved. She tells me teasingly that I won’t get to see for myself, but then takes off her panties. I look at my watch; we are five minutes into our proposed fifteen and she’s already naked in front of me.

Lisa asks me what I’m thinking, and I tell her I want to touch her pussy, asking how much that would cost. She answers “if you pay one hour, one champagne, and some tips,” and that we can do that in the club. She asks me if I want to buy more time since our fifteen minutes are up. I check my watch and protest it has only been seven minutes. She assures me that she knows the time is up as she starts getting dressed.

I ask how much sex would cost, and she says, “we cannot have sex here, but we can have a lot of fun here, and make me want you, then maybe I will meet you after. Let’s start to drink a little, we can talk a bit, then come back here if you like, for a while. I think it works good like that.” She’s put on her clothes at this point, and we start walking out.

She asks me what I want to do, and I tell her I need to go get more money to keep going. She assures me they take all kinds of cards, as well as pounds and euro notes, but I tell her I’d rather go get more cash. She tells me they are open until 1:00 AM, and until 5:00 AM on weekends. I ask again how much one-hour is as we walk down the stairs, and she says 60,000 ISK, asking if it sounds good in a coquettish manner. When we get to the bar, she asks me if I want to buy her a drink, and I tell her I’ll first get more money.

I pull back the black blinds serving as a door, walk down the stairs and through the ground floor sports bar. People cheer as a goal is scored, and I slip out. I get flooded with a range of emotions from disgust, anger and shame, but they settle at simply feeling sullied.

* Lisa’s name and a few other details have been changed to protect her identity.

Today there are three champagne clubs operating in Reykjavík: Strawberries, Crystal and VIP club (the latter two opened this year).

In July, Fréttablaðið sent two informants to interview the women working at these champagne clubs who found that they were all foreigners who had been in Iceland for a week, spoke little English, and lived together in a small apartment. The reporters were told that they could do “what they wanted” with the women for 10 minutes in privacy for 20,000 ISK, without any further explanation.

When Björk Vilhelsmdóttir, a city councilperson, and Steinunn Gyðu- and Guðjónsdóttir, the director of Kristínarhús, a shelter for women exiting trafficking and prostitution, spoke out against the champagne clubs, they were threatened with lawsuits for slander. Vilhjálmur H. Vilhjálmsson, the lawyer representing Crystal and VIP club, demanded that they withdraw their remarks suggesting that there were signs of human trafficking and prostitution taking place at the champagne clubs.

Vilhjálmur further attacked the character and credentials of María Lilja Þrastardóttir, the journalist who reported on the champagne clubs. Vilhjálmur said María “is a hardcore feminist and spokesperson for the Slutwalk, who is not capable of reporting anything other than her personal views, which makes it impossible for her to approach any subject with objectivity.”
Chair of Reykjavík City Council Dagur B. Eggertson said during a speech at the Slutwalk that “we will not let lawsuits discourage us.” The City Council is currently looking into the legality of champagne clubs. 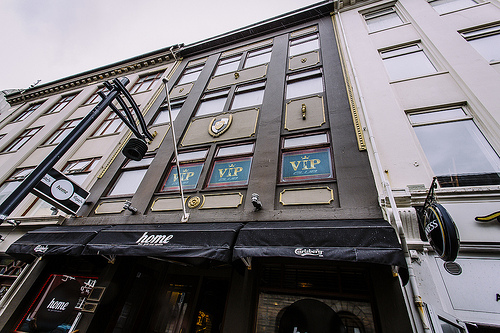 
Is VIP Club Breaking The Law?

The owners say:
Mikael Nikkulásson, the most well known of the owners, claimed that another person whose name he couldn’t remember was completely responsible for running the club. Mikael said customers could buy expensive drinks and take it easy in the VIP Club. He denied knowing what purchasing ‘private time’ with ladies entailed, and refused to comment further. Another of the owners did not want to speak about the club, stating that he was trying to get out of the business as quickly as possible.

The lawyer says:
Vilhjálmur H. Vilhjálmsson, the club’s lawyer, immediately asked whether the article would be a journalistic one, or “politically correct femi-communist propaganda” (Icelandic: “pólitískur mussu-kommúnista réttrúnaður”). He answered my questions with questions of his own about the contents of the article. He stated that he was not a PR person for the club, and suggested I visit it myself before writing anything about it. The lawyer also suggested that somebody other than the building owner is responsible for running the club.

The operational manager says:
The person in question is Kristján Georg Jósteinsson, the operational manager of the company Almitra ehf, which runs the club. He described the place as a nightclub with a well-stocked bar. He stated clearly that stripping and prostitution were illegal in Iceland, and that these services were not being offered at the club. He said that buying ‘private time’ with the ladies involved a friendly, secluded chat and nothing more. He then got defensive, asked about what political party I voted for, and wanted to retract his statements.

“It is not permissible for restaurants [which includes bars] to offer nude shows, promote or profit in any way from the nudity of staff or others present”
– Article 4, section 4 of Icelandic law 85/2007, amended on March 23 2010

About the photo:
This image is from Stígamót’s campaign against sexual exploitation and human trafficking. “The idea came from designer Stefán Einarson, and we felt it was the strongest move to print with as little text as possible,” spokesperson Guðrún Jónsdóttir said. “We have given several groups permission to use it, including for a book cover in Bulgaria, posters for organisations all over Eastern Europe, and the Nest in Denmark which is a home for victims of trafficking. It has become so well-known worldwide that occasionally we get foreigners accusing us of trying to appropriate it.” Stígamót kicked off their own “champagne club” nights on Thursday, August 15 to raise awareness about sex crimes worldwide and to raise money for the centre, which counsels hundreds of sexual assault and rape survivors each year.