As a nation, Iceland has suffered some hardship over the past few years (after a few pretty sweet ones, oh, those cruelly luscious bubble years, when we collectively renewed our fleet of luxury SUVs, high-end stereo equipment, flatscreen TVs and edible gold flakes).
First, all our vast fortunes just sort of up and vanished for no discernible reason (we are finally working on locating our riches again after years of inaction, having just voted in the parties that somehow misplaced them (in their other pants?) back when). We were laughed off the high streets of London and Copenhagen, Danish newspapers made really mean jokes about us and some unchill, impatient Brits and Dutchmen put really harsh pressure on us to repay some money they claim we were responsible for losing (other pants! Check is in the mail! Give it a minute! It’s your fault for trusting us with it in the first place!).
Then, a bunch of our volcanoes exploded through no fault of our own, spurring a drunken Scottish man to proclaim he hated Iceland on live television. These volcano explosions also resulted in our prized (and only) possession, the Icelandic language, being mercilessly butchered and mocked by just about every television personality in the Western world.
Life was tough. Food got expensive. The iTunes store was inaccessible for the longest time, and most people didn’t even have iPhones, having to settle for cheaper Android (or even Nokia!) handsets. The cars got older, the flatscreens were appallingly two-dimensional. McDonalds up and left. A bunch of dirty art types took over Reykjavík, trying to impose their fancy ‘car free’ vegan lifestyles on decent, normal taxpayers. Sigur Rós released an ‘ambient’ album. Björk made an iPad app album. We kept losing the Eurovision song contest and notable sports events (even handball!). Life was tough.
Things are finally looking up, however! We finally have a feisty, go-getting government that plans on pumping the economy full of vulture cash so we can upgrade our flatscreens to 3D. Sigur Rós’ new songs are way poppier. Of Monsters and Men! And last but not least, WE FINALLY HAVE OUR VERY OWN SIMPSONS EPISODE DEDICATED TO THE ONE AND ONLY US! Yup, after a brief, glorious glimpse of how Iceland would look in The Simpsons’ universe a couple of seasons ago, there’s finally a full Simpsons episode of Iceland! It involves the show’s Icelandic cast member, Carl (of Lenny and Carl fame) eloping to his native country with the proceeds from a lottery ticket he had bought in cahoots with Homer, Lenny and Moe—and it features original music and cameos from Sigur Rós! Whoa!
Even though The Simpsons have mostly sucked for the past decade (a bad Simpsons episode still trumps most television out there), this is great good fortune. So exciting! To celebrate Iceland’s victory over loser countries that will never get their own Simpsons episodes, countries like Denmark specifically, we have liveblogged the twenty-first episode of The Simpsons twenty-fourth season (Simpsons episode #529). Read on for fun liveblog-style action!
Things haven’t been so exciting for Iceland since Bill Cosby donned an Icelandic wool sweater on an episode of his wonderful sitcom back in the ‘80s.
We’re back, baby! 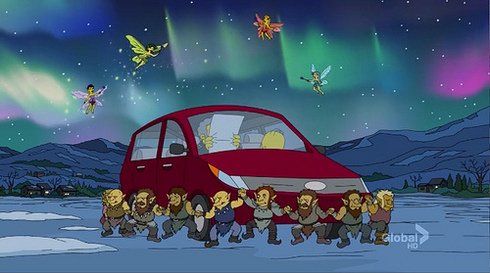 THE LIVEBLOG
[00:17] The show starts with the shortened version of the classic intro. Despite my hopes, the couch gag doesn’t reference Iceland, although it is fish themed. People in Iceland catch and eat a lot of fish, and many people say Icelanders’ memory is goldfish-like. Our coins also have fish on them. So maybe that’s a reference?
[00:43] Homer watching women play tennis on TV. Makes vaguely sexist remarks. Oh, Homer. No Iceland yet.
[00:53] A joke about TiVo ‘recording conflicts’. Homer can’t watch sexy tennis anymore. I had this happen once, when I was visiting some dude, although I wasn’t watching sexy tennis. During a pivotal moment in Goodfellas, the TV switched to ‘The Man Show’ and commenced recording. This was infuriating on every level.
[01:53] Simpsons is so much better than Family Guy. They started becoming a bit like Family Guy, adopting its non-sequitur humour, a few seasons back. I in turn mostly stopped watching. But the first two minutes of this episode feature no Family Guy style humour. This is promising.
[03:33] No Iceland yet.
[04:14] Holy moly! The gang won the Springfield lottery! “200 grand! That’s fifty thousand bucks each!”
[04:43] Carl is already acting way suspicious. Wonder if I would spot this had the plot not been revealed beforehand.
[06:12] It’s official! Carl has abandoned the gang! He’s leaving on a jet plane!
[06:14] No Iceland yet.
[07:45] No Iceland yet. But this is pretty funny nonetheless. Nice juggalo reference a while back.
[08:17] “Moolah-stealing jackpot-thief.” Lol. No Iceland yet.
[08:38] WHOA! ICELANDIC!
[08:45] Lisa: “The geyser is one of the most famous natural wonders in… Iceland?!? I guess that’s where Carl’s from.”
[08:53] Moe: “Iceland? Is that even a real place”? Reference to genealogical database. Thankfully, this isn’t Family Guy, so incest app joke might not show up.
[09:06] Lisa’s pronunciation of Reykjavík is pretty good. A lot of first time Reykjavík-sayers use a hard “J”. “Reyk-dja-week.” Good ol’ Lisa went with the classic “Rehkjavehk.” Nice (I even once met a couple of tourists who proclaimed their love for “B-djerk’s music!”).[09:20]: Valhalla Air. Lol.
[09:30] Marge is concerned that Homer is going “so far away.” While Iceland does sound like a super remote destination, it’s actually a shorter flight than going coast to coast in the US. It may be remote, but it ain’t that far.
[10:25] “Iceland is green and Greenland is icy” anecdote put in its place, finally. THANK YOU!
[11:03] Icelander English accent represented in a mostly acceptable manner (although still too Swedish sounding). Also, it’s odd for an Icelander to call out the Icelandic name Ingimar in an Icelandic English accent.
[11:20] First Björk reference. Boy, that swan dress really made an impression in the US, huh?
[11:43] A “Fjord Fiesta” drives through some pristine looking nature soundtracked by an original Sigur Rós composition. Yup.
[12:04] Good job on pronouncing the “æ”, Moe and Lenny! Odd that the “ö” was left out, but whatever.
[12:15] Aurora spotted! Check!
[12:20] Elves and… fairies? Check.
[12:45] More Sigur Rós. Lava fields. Check. That bridge might be the one to Borgarnes.
[12:50] Jökulsárlón. Check.
[13:06] Sigur Rós background music really creating some nice drama. Simpsons should probably get them to score every show. This would rejuvenate the series.
[13:28] The restaurant is called Yukki’s Grossfud. And it’s serving yecchy, gross food. Figures. Rotten shark: Check.
[14:18] They’re not friends?
[14:20] Carl: “Friends know their friends are from Iceland!” 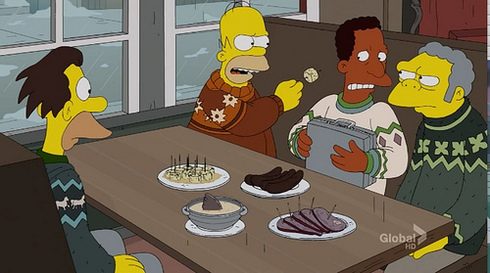 [14:50] Homer is eating the shark. Good one, Homer. It’s really not that bad. You just have to think of it as a kind of cheese. A fermented, rubbery, super old cheese.
[15:04] Yukki’s Grossfud interiors look a lot like Hressó. But it seems to be located on Skólavörðustígur (could it be… Mamma Steina?).They forgot to draw in US café Babalú and the two noodlehuts and all the tourists and tourist shops. Looks like this show happens in the Iceland of  fifteen years ago. That was a pretty great place. [UPDATE: having reviewed the footage, I can attest that at least one of the noodle huts is depicted. Fancy that! Noodle Station on The Simpsons!].
[15:55] OK so Sigur Rós sounds great on The Simpsons, but Reykjavík geography is all messy. This humorous cartoon is somewhat inaccurate! D’oh!
[16:25] Moe just proposed making soup out of the page of calfskin Carl had bought with the lottery winnings. If this is a reference to Iceland’s history, it is a super deep and clever one.
[16:59] This sort of makes me miss Reykjavík 🙁
[18:01] Jóhanna Sigurðardóttir is on The Simpsons! IN YOUR FACE, DAVÍÐ ODDSSON!
[19:25] This redemption ceremony in front of Hallgrímskirkja is really something.
[19:43] Looks like the gang had at least half of their lottery winnings left, since they could afford cocktails at Blue Lagoon.
[20:38] Cue Sigur Rós’ take on Danny Elfman’s Simpsons theme!
[20:58] Pretty damn good job, Sigur Rós!
OK. That’s over. This was a good show, and not just because it seemed tailor made for a) Icelanders and b) people interested in Iceland (given The Simpsons still-massive audience, that doesn’t count for a lot, so you’ve got to give them props for that). Nope, this was in fact a generally pretty good episode of The Simpsons, free of the Family Guy-isms that have plagued it, possessing one of the qualities I had thought the show had mostly given up on: heart and character.
Now, some thoughts in the direct aftermath of watching it:
-Sigur Rós must be so thrilled to contribute music to The Simpsons. I imagine anyone who was around and in my circa age bracket in the ‘90s would be.
-I was expecting them to contribute some voice acting too, though. But they’ve never been very vocal band.
-If Carl was adopted, why do the Saga-versions of the Carlsson family all look like Carl? This cartoon makes no sense!
-It’s really easy when watching a show like this, especially when live-blogging a show like this, to become a super boring pedant-o-bot that’s all: “This isn’t what Iceland’s really like! In Iceland, the blabhablah bleeeee.” I’m afraid I fell into that trap a couple of times during this liveblog and I apologize for it.
-I think The Simpsons’ trips to Japan and especially Australia were more fun than the Iceland show. This is probably because the writing team at that time was better, but it might have to do with aforementioned pedantry.
-Despite being all apologetic for my pedantry, I’m still annoyed at all the Swedish-Icelandic accents.
-Björk didn’t make a second appearance.
-Really miss Iceland right now. 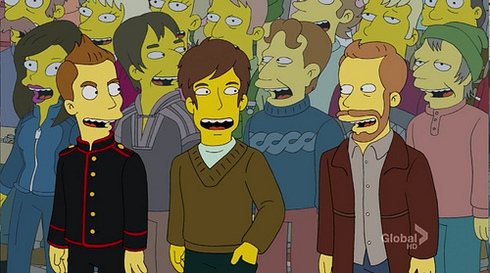