A not so authentic seagull “ca-caw, ca-caw” steals my attention as I wait outside a whale watching tour office at the Reykjavík Harbour. I initially write it off as a species of rare Icelandic bird I am yet to come into contact with, but it gets louder and louder until I turn and discover said rare bird is Craig Downing: Festival Director of Couch Fest Films. He rolls in astride his bicycle, still ca-cawing, then executes a mid-motion dismount, parks the bike against a nearby pole, de-helmets and introduces himself.
“We have come to steal your boat,” Craig grandly announces as we enter the tour office. The lady behind the desk isn’t startled in the slightest; she and Craig have been acquainted. “Follow me,” she says and we are promptly shown to Rosin: Special Tours’ whale watching boat, one of the Reykjavík locations playing host to Couch Fest screenings around the world on November 10.
We stumble aboard and get comfortable just as the sun begins to set over the harbour. Craig is very likeable. He speaks quickly and energetically about everything and anything that comes to mind. Within minutes of meeting me he’d already told me how he’d once spent two months in my hometown of Melbourne. Why was he there? He was being paid to regularly poop in a bag for medical research.
The topic he speaks most passionately about though is Couch Fest Films, now into its fifth year of screening some of the world’s best short films in ordinary people’s homes across the globe. “Take your favourite film festival, take everything about it. The chaos, the voting, the drama, all of it, and just take out the theatres and replace it with living rooms,” Craig explains. “We’re a very legitimate film festival, it just happens to be in your living room.”
Tricking Seattleites into  loosening up
Craig moved to Austin, Texas when he landed a job as a screener for the SXSW Festival, but later relocated to Seattle where the idea for Couch Fest Films was born.
“Austin is really casual. You can go to the bus stop and the next thing you know you meet your best friend, you’ve quit work and you’ve started a band. Everyone’s very open and casual. Seattle is a very creative town but it wasn’t quite as open as I was used to. And I kept thinking ‘what can I do to get people to motherfuckin’ open up a little bit?’
He tricked Seattleites into opening their doors to strangers by creating what he calls a ‘community development programme’ disguised as a film festival, luring them in with the promise of world-class short films. And it worked. “Next thing you know, there’s an intermission and they find themselves so awkward in five minutes so they start talking. It was just a way for them to get over themselves and find other cinephiles and have a shared experience to kind of connect over.”
The selection process for Couch Fest Films isn’t a technical one. Films are not marked against any formal criteria and there is certainly no vote tallying. “Realistically we say to ourselves, ‘would we take a bottle over the head for this film?’ It’s just kind of a gut reaction,” Craig says.
“We’ve rejected films from professionals. But on the other end you’ve got films that’ve been totally shot with a cell phone and you could tell the roommates got tired of being in the film so then halfway through it suddenly becomes an animation. But that is a testament to someone who is obsessed with this film and is going to finish it no matter what. And he pulled it off.”
Bros watching shitty YouTube videos?
Despite having such a relatable staple of modern life as the couch to use as a marketing tool, Craig says selling the idea to people can be challenging.
“We got a grant from the Seattle City Council, but we almost didn’t get it. They were like ‘Why the fuck are we gonna pay a bunch of bros. down in the basement to like order pizza and watch shitty YouTube videos?’ There’s this idea that it’s just cheap couch films. That’s why we do try to get the very best films to combat that. But our mission has always been to bring people together with mind-blowing films.”
I tell Craig I’m not sure how I would fare watching a film with complete strangers in such a social atmosphere. Mid-film discussion annoys me. As do people who ask me to explain details of the plot, and I abhor people chewing, crunching, chomping, or doing anything audible with food while a film is on.
“When I go to the cinema it’s dark, I have this experience,” Craig says. “I think people are more relaxed in the living room environment. There isn’t an usher that’s going to tell you to be quiet. There isn’t a screen to tell you to turn your cell phone off. It’s a very casual environment and I think that encourages people to talk.”
So just how cosy is one permitted to get in a stranger’s home?
“I think it’s pretty much up to the host how casual or cosy they want to get,” Craig says. “One year this one woman did this whole theme. She called it ‘the swinging ‘70s’ or something and she dressed up in a velvet jumpsuit. Everyone had to put keys in a bowl and whoever’s keys got pulled out got a fondue cheese kit. I was like that’s cute, but you know we’re going to be showing films? And she was like ‘oh yeah, but I accidentally bought like 50 cheese kits a year ago and I just want to get rid of them.” “So it’s the host’s prerogative to make it as cosy or eclectic or as comfortable or as thematic as they want. But if someone just wants to open the door, turn the TV on and press play on the DVD, they’re already a winner.” 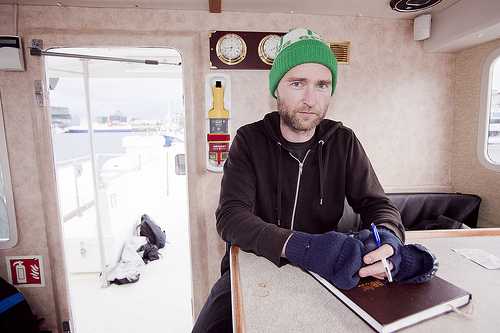 Growing pains in Iceland
Last year Couch Fest Films made its Icelandic debut, although it didn’t receive the kind of support Craig had anticipated. A number of factors could have been responsible. Craig believes there was a lot of reservation about letting complete strangers into your living room and then being expected to host them socially.
“Iceland is a fishing country, not a chatty loud American country unless you’re out at 4 AM throwing bottles down Laugavegur. I think it was a little bit new for the community and a little bit on the edge of the comfort zone. This year I think they recognise that we’re not a Chinese company trying to take over real estate inside their living room,” he says, laughing.
And support this year they have received. Aside from the whale watching tour boat, the festival has secured screening locations as diverse as “the motherfucking Harpa,” in Craig’s own excited words and a downtown bike workshop.
“Last year there was no way we could have got into Harpa. This year the response has been amazing. We’ve contacted people and they’ve been like, ‘Totally, awesome, when can we meet?’ This boat, it was one phone call. They were like, ‘a film festival on the boat? That’d be great. And how do you feel about taking the guests out on the water?’ We were like, ‘Umm, yeah!’ Like we’re gonna say, ‘Oh no, don’t take the guests out on the whale watching tour for fucking free!’” he laughs.
Expanding all the way to Oman
The 2011 festival opened Craig’s eyes to the possibilities of hosting screenings in locations that are a bit out of the ordinary. Last year, for instance, they secured a host in Oman, a country where all media must be cleared by the ministry of censors before being broadcast.
“We delivered what ostensibly is western Satan media and had a film festival in someone’s house. I would like for this person to email me and let me know he’s still alive at this point. He hasn’t emailed me since. I think he’s ok. But I mean we delivered a film festival in Oman with Western media. I think that’s pretty fun.”
Logistically, the biggest difference in the 2012 festival programme will be the number of unique locations organised for screenings. “In Germany we’re fucking hosting in a castle, we’re hosting in a media arts centre in Nepal and we’re going to be hosting on this boat.”
Craig talks with contagious excitement about possible future directions for the festival. “I would love to do an open-air screening in an old city in Poland. I would love to do it in Ikea. The couches are already there. All you’d have to do is set up a screen. Everybody sits down while they’re taking a break from shopping. Kind of like a flash-mob film festival. A planned flash-mob film festival in Ikea.”
—
Don’t Miss These Five Couch Fest Films
There are two rules to follow when submitting a film to Couch Fest Films: Rule One, films must not suck. Rule two, films must be less than 8 minutes. That’s it, but they’re even kind of flexible with the second rule.
This year the festival received hundreds of entries from all over the world and organisers have put themselves through hour upon gruelling hour of film-watching to narrow it down to 40 finalists (to be honest, it’s probably what they’d be doing anyway). These top 40 films will be shown at screenings worldwide on November 10.
None of the films suck, but here are five that we think especially don’t suck! Locations have yet to be confirmed so you might want to visit www.couchfestfilms.com to find out where they will be shown as November 10 approaches.
The Maker 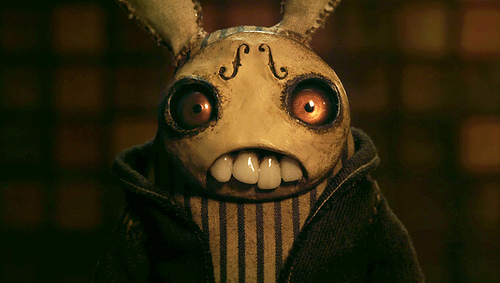 A strange creature races against time to make the most important and beautiful creation of his life.
We Refuse To Be Cold 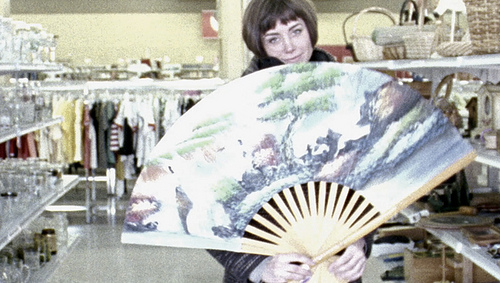 A couple from Montreal make a pact for the winter.
Funny Web Cam Effects 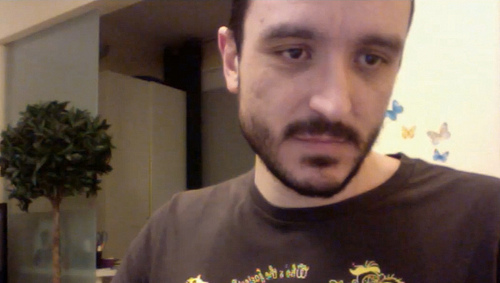 A moment witnessed through the eyes of a web cam.
Voice Over 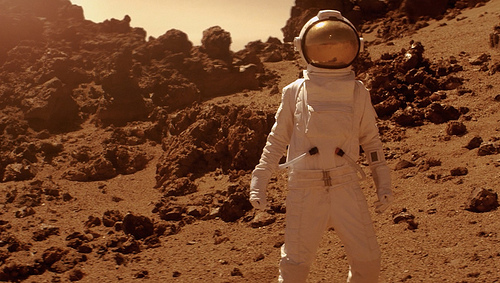 A stranded astronaut struggles to return to his ship as he runs out of oxygen, but then…
Thumb Snatchers 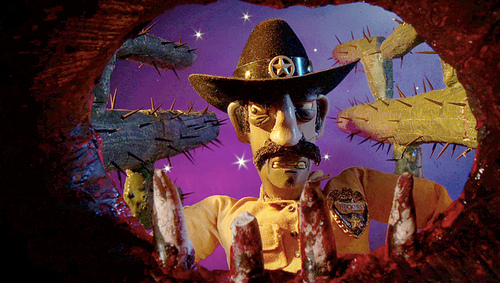 A carnivorous Texan sheriff defends his right to eat meat from extra-terrestrial beings.
The Reykjavík Grapevine is a media sponsor of this event! Check out couchfestfilms.com for the schedule of film screenings on November 10 in living rooms around Reykjavík. See you there!