Where Has The Love Gone?

Music pounds from a handmade, wooden DJ booth, friends congregate on a set of vibrantly painted picnic tables and local artists fry up Icelandic pylsa on a small, stone grill. Tibetan prayer flags flap quietly amongst tree branches and skateboarders carve across a selection of hand-poured cement obstacles that they helped design.
Located in an abandoned square between Laugavegur and Hverfisgata, Hjartagarðurinn (“Heart Park”) is one of Reykjavík’s most colourful and culturally appealing areas. It is a communal space with a large brick heart, built right into the ground, and is surrounded on all sides by massive graffiti murals, colourfully masking the plaza’s austere, grey walls.
But it wasn ’t always such a nice place. As the square is privately owned by a subsidiary of the facilities management company Reginn, the city is not responsible for its upkeep. Enter Tómas Magnússon, Tanya Pollock, and Örn Tönsberg—three people who took it upon themselves to revive and renovate the park. “We saw the potential, and we wanted to be here with our kids, but it was totally trashed,” Tanya told us over the summer.
“People referred to it as the ‘crack park,’ because of some of the things we’d find during our clean-ups. The only thing that kept the place from looking like a total hellhole was the graffiti.
Citizens and tourists still came by in droves to enjoy the artwork. Everyone wanted to be there because of the art, the location and the sun, but it was hard to be there with our children due to the filth, and broken glass in every step. Something had to be done.”
Last summer they began their clean-up to transform the rundown lot into a community park, and slowly, Hjartagarðurinn was born. However, just as renovation nears completion, the square—along with a large part of Reykjavík’s cultural scene—faces demolition.
Plans for yet another hotel
As tourism continues to grow in the 101 area, so does the need for hotels and space to plant those hotels. Thus, Reykjavík’s City Planning Committee recently introduced a proposal that would get rid of Hjartagarðurinn and its surrounding buildings to make way for the construction of a new hotel under the direction of the architecture firm, Arkitektur.
“We had a vision and plan for the garden based on what the community wanted to see and we tried to materialise this,” Tanya says. “The owners gave us permission, as did the city. We were also told that any future plans for the area would be discussed with the community—that we could present our visions for the place, and that it would be taken into consideration. But they didn’t do that. Their current plan doesn’t coincide with what the community wants and needs. They should have invited us to those meetings.”
These places will be missed
One of the allures of Hjartagarðurinn is the small cement skatepark, which was constructed this past summer, and will likely be destroyed if the city’s current plan passes. “The skatepark was one of our first visions for the place because there is no free, outdoor skate park in the city,” Tanya says. “Initially, the hotel adjoining the garden told us that we would not be allowed to have it. But when the hotel owner noticed how wonderful Hjartagarðurinn had become, he gave us his blessing to build a small skatepark.”
Local rider Daníel Freyr Elíasson tells me adamantly, “Hjartagarðurinn is a place where everyone, regardless of their age or gender, can come together to cultivate their art, totally free of judgment. I am shocked that our city would let this happen.” 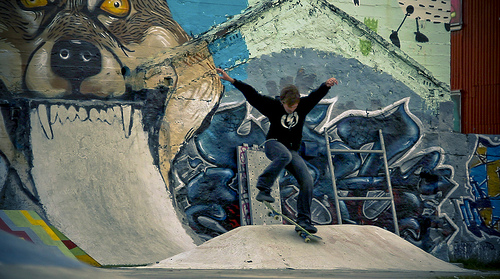 Unfortunately, Hjartagarðurinn is not the only spot threatened by this proposal, but also the surrounding buildings; the bar and venue Faktorý, on Smiðjustígur, is among these likely to be demolished. This comes as a shock, and an extremely hard hit to the city’s musicians—especially following the closing of one of Reykjavík’s largest venues, NASA, earlier this year.
“After we lost NASA, Reykjavík’s musical community sees Faktorý as sort of a ‘last stand,’” Agent Fresco drummer Hrafnkell Örn Guðjónsson says. “If we keep losing these large venues, soon there will be nothing left for us.” Prolific rapper Emmsjé Gauti adds, “Everyone talks about just moving everything into Harpa, but the acoustics are really terrible if you’re a rock band. It’s basically impossible to get a good mix. It was built with an orchestra in mind.”
Iceland Airwaves, the country’s largest musical event, and a main attraction for tourists in October and November, continues to grow larger every year. Tickets sold out in record time this year, and nearly every hotel in 101 was completely booked months in advance. The venue at Faktorý is repeatedly used each year by Airwaves to showcase the country’s best and brightest.
“I fear that someday, Icelanders will grow to hate all those tourists for facilitating the need to destroy their alternative culture sites—and Faktorý is definitely one of those,” German photographer and Airwaves veteran Florian Trykowski says. “As a tourist, I don’t need another huge, modern building built downtown. Nothing against Harpa, but I truly hope the organisers of Airwaves aren’t planning on moving the festival exclusively into Harpa. Reykjavík is on its way to losing some of the rough, scratchy edges I love so much.”
We should have a say
Tanya, Tómas and Örn are currently in the process of negotiating with the Reykjavík City Council in hopes of finding common ground. “We want them to back up a bit on the construction in the area, leaving alone the businesses that are well alone. There is no logic in tearing down Faktorý; the house is in good condition and it’s booming with music and life,” Tayna says. “Since our government wants to construct buildings for private owners to buy and make their businesses, perhaps the government can support us by buying one house for a grassroots cultural centre. There can be a coffee house and gallery, a place for concerts, possibly an indoor market, designer store, and so on. I would rather see a hostel there than one more hotel.”
Travellers come to see Iceland, meet Icelanders, and experience Icelandic culture. Hjartagarðurinn is the embodiment of this, as there are few other places in the city that are as frequently visited by citizens and repeatedly photographed by tourists. It is the most active public park in Reykjavík because people are inspired to let the arts bloom. “People need to remember that we are paying the government salary—they work for us,” Tanya concludes. “We want NASA, Faktorý and the Hjartagarðurinn—and even though the area is privately owned, the government should help us work with the owners to find a mutual agreement.” 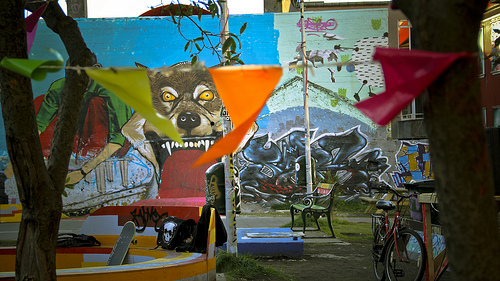 Unlike the petitions to save NASA, which despite good intentions were far too little and much too late, this chorus of disapproval is shared by artists, musicians, and tourists alike. “It’s rare for a city to give that amount of surface area to urban art of different styles and mediums, and the city will lose a piece of its character if it’s replaced with more typical tourist fare,” says Jeff Obermeyer, a Washington State resident, who visits Iceland and attends the annual Airwaves music festival regularly. “Iceland’s tourism succeeds in part because of the conscious effort people make to go there and experience the small things.” Hjartagarðurinn is an example of privately owned land being allocated as private parties see fit.
However, companies like Reginn (which is also a part of Landsbankinn, one of the three major commercial banks to collapse at the start of Iceland’s economic recession in 2008) are only ever private until they need the public to bail them out. “We shouldn’t only have a say in things once it’s time to foot the bill,” says food critic Ragnar Egilsson. “This is our capital, our skyline, our nightlife, and our culture. We should all have a say in it.”
Read Project Manager Hannes Frímann Sigurðsson´s take on the issue here.