The Professor And His Pixel Prince 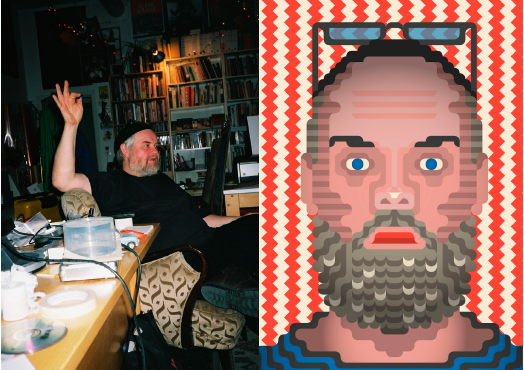 Siggi on Goddur: Goddur is a great thinker, I would say. He has given a lot of thought to a lot of things, and he usually has something to say. And I usually agree with him, he has a good view of the world. He has also helped me a lot. I have much respect for him. 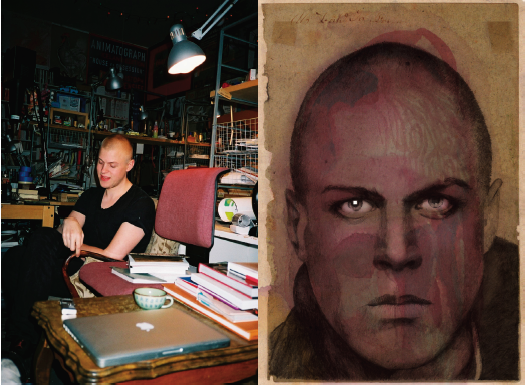 Goddur on Siggi: In my mind, Siggi Eggertsson is a phenomenon of obsession. He makes up certain rules for himself. They aren’t very many. He keeps within their confines and masters their use. This is how he gets results that have placed him in the high ranks of the world’s visual communicators.

PLUMBERS AND PROGRAMMERS
SE: I find it very odd, this sudden focus on design. What with DesignMarch and everyone constantly talking about designers and design. This interview for instance. Where does it come from? Why? Why aren’t people talking about great plumbers or programmers or whatever… why does what we do matter so much? I don’t understand.
G: You don’t think it matters?
SE: I just don’t understand why people aren’t talking about something else.. It’s odd having to tell people about what you’re doing, about ‘what design is’. Why not talk to a programmer? They are intensely creative, and they’re making useful things that make people’s lives easier. Why isn’t the media interviewing programmers and placing them on their covers?
G: Could it be that the designer needs more exposure than the programmer in order to get work?
SE: It works the same for the most part. The only difference is that the programmer’s job isn’t as visual. It’s problem solving. Some programmers are even creative, as in your earlier paradigm, while others are craftsmen. It’s a fascinating field.

But one aspect of your work is mass communication; addressing and trying to reach large groups of people, and if you are good at your job and succeed one could imagine that you’ve tapped into something human, something that’s shared by people the world over.
SE: Yeah, maybe. I never try to appeal to people or reach them. I put what I do out there and people will see it, but I’m not doing it for them. Everything I do, I do for myself. Regardless, I am fortunate enough that people that hire me for jobs usually know who I am and what I’m about. They’re hiring me to do what I do best, so there’s usually no confusion in that regard. I am also picky about projects, I need to like a band if I am to make their album cover. Making the cover for Apparat, for instance, I really liked. They are one of my favourite Icelandic bands.

You seem to share a certain aesthetic with the band, your artwork fit well with the music. Describe the process.
SE: We wanted to make something that was digital, yet had human elements. The band wanted to make a crest for each member and I liked the idea. I had spent a lot of time on the computer at that point, so I wanted to make this project a little differently. I drew all the pictures, then carved everything out in vinyl foil—each colour was a different film—and glued it together. It brought a human touch, they’re not 100% perfect.
Making it this way was an idiosyncratic decision, it would have definitely been easier on a computer. It took me around two weeks to draw the crests and then we spent a few nights into carving it all out, me and my friend Ögmundur Jónsson, who is very good with his hands.

What is your take on the current situation in Iceland in terms of design? Is anything going on?
[they laugh]
G: He has no idea! He won’t know a thing about it!
SE: Yeah, no I don’t. I don’t think anything’s happening. I feel like there’s so much depression and… lack of ambition around. I can’t name any examples though.
G: I think you’re wrong. But it’s hard to spot when something’s going on. Like when kids ask me to recommend a school to go to. “Goddur, what schools are happening these days? Where’s the scene?” The fact is that if you hear about such a school or such a scene, it’s almost certain that it’s over by that time. That’s the nature of things—a chemistry starts brewing and no one can tell why, and no one even spots it until it’s over.

So, did something happen then? Has something happened?
G: See, what’s happened in the past decade is that Icelanders are for the first time participating in an international design culture, and—pay attention—almost exclusively in the field of graphic design. Books have been published about Icelandic graphic designers, magazines interview them and commission them. This started happening around the year 2000, and it doesn’t apply to architects or industrial designers or chair designers or whatnot. It’s the graphic ones that are raising attention and participating.
SE: Like who?
G: You, Katrín Péturs, Hjalti Karlsson…
SE: That’s not a lot of people.
G: Comparatively it is. And these three all have an international label. You can’t say that about Icelandic product designers or architects.

Why is this happening? Is it the internet’s fault?
G: No, I claim it’s because an international superstar of product design, Michael Young, fell in love with an Icelandic woman. It’s far more important than the internet. Journalists started venturing here to meet him and had their eyes opened to Icelandic designers and that there was something potentially brewing here that had gone undocumented. This attention and exposure injected life into the community.
G: Is anything happening in Berlin?
SE: Yes. There’s access to more, at least.
G: Is there? Do we not have access to the world via the internet and magazines and the media? Is this some personal access that you have there? I can tell you that I’ve met more world famous artists in Iceland than I ever met abroad. They are untouchable abroad, here they become your friends. You understand? I have had good conversations with David Bowie in Álftanes. You can’t meet him in New York or wherever he lives.
SE: I’ve only ever hung out with Björk abroad, never in Iceland. You’ve gotten so angry Goddur [laughs]!
[Goddur laughs]
G: I have to talk to you as a student. I have to be your teacher, that is my fate.
SE: Isn’t that just fine?