Packed into a single floor of the Íslandsbanki (née Glitnir) building on Lækjargata are several fledgling software companies, among them the six-person operation known simply as MindGames.
Funded by RannÍs and the Icelandic Ministry of Industry, MindGames is essentially a software developer of sorts. They specialise in something quite more awesome: mind-control gaming, and are one of a select few in the entire world who do so. They basically design computer games where at least one aspect of the game is controlled via neural interface with special EEG, or Electro-Encephalographic, headsets fitted with one or more quarter-inch wide sensor pads. An Electro-Encephalogram is, simply put, a reading of the electrical activity generated by neurons firing in your brain. Think in a certain way, and the sensor detects it, and uses it to interface with the game. In other words, you can make video games do shit with the power of your brain. While you’re waiting for the awesome in that sentence to fully sink in, keep reading.

THE BEST AND BRIGHTEST
Deepa Iyengar and her husband Hannes Högni Vilhjálmsson developed the idea for the company in January 2009. “I had the idea, and dragged him in… we had two other friends, the four of us developed a business plan and entered it in the Innovit Golden Egg entrepreneurial competition, and we got ‘top ten’ in that,” Deepa explains. The office is a bare-bones affair, one big room with dividers and Ikea furniture. The other staffers stare intently at their computer screens as Deepa and I talk in the conference room. “Then I spent basically from April to June recruiting the people who ended up founding MindGames.”
It’s an impressive roster. Hannes has an MA and a PhD from MIT’s media laboratory, and is an associate professor of computer science at the artificial intelligence lab of Reykjavík University (yes, they totally have one of those), computer programmer Örn Haraldsson is also a certified yoga and meditation instructor (I’m not making these people up), Ragnar Már Nikulásson and Katla Rós Völudóttir are both recent graduates from the Iceland Academy of the Arts, Hjalti Kolbeinsson is a software engineer also from Reykjavík University, while Deepa herself has an MA in brain and cognitive science from MIT.

HEADSETS: THEY WON’T GET YOU LAID 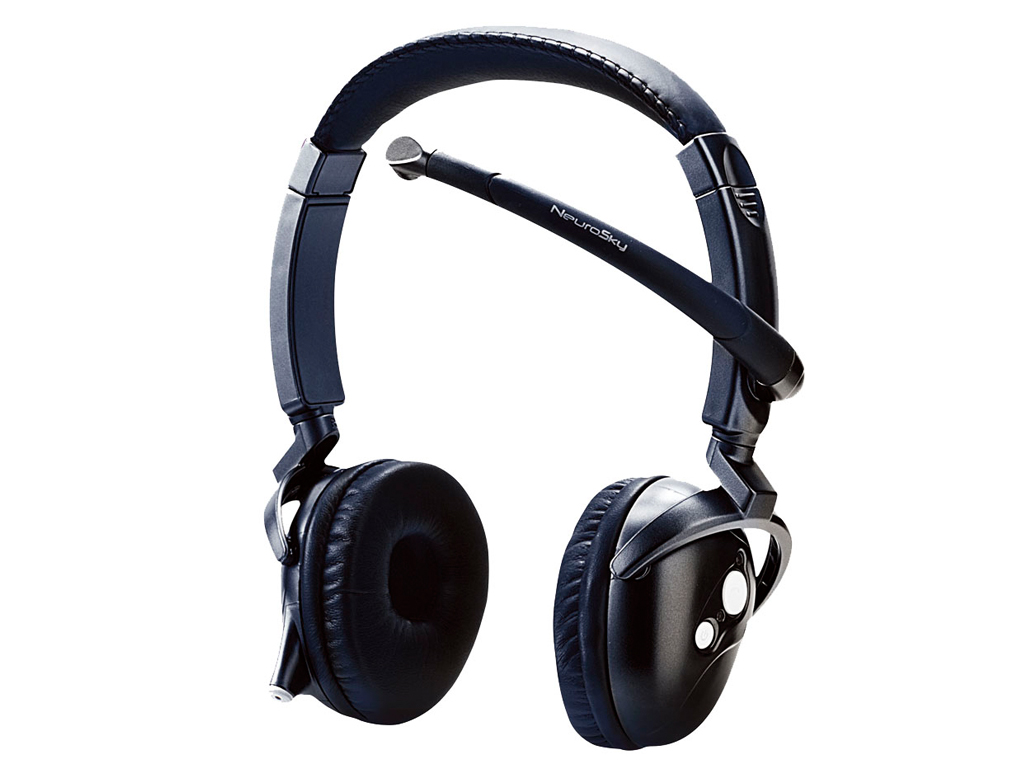 Deepa shows me the gaming headsets. That have names like the NeuroSky MindSet and the Emotiv EPOC, and are made by a variety of fairly secretive and paranoid companies. “They don’t want to tell us exactly how they work, and we’re not allowed to reverse-engineer them,” Deepa explains. “They don’t really work together, but I think it’ll be the company that branches out, that tries to work with the others that’ll end up dominating the market.” I try them on and catch my reflection in the conference room window. I look like an idiot. “These were obviously intended for use in the privacy of your own home,” Deepa says.
While the larger, more padded (and more difficult-to-put-on) headsets actually record neurons firing in multiple parts of the brain, the smaller ones have only one sensor, recording one specific form of brain activity. In the case of MindGames’ two most successful games, ‘Gods And Mortals’ and ‘Tug Of Mind’, these ‘one-spot’ headsets record the activity associated with relaxation.

KILL YOUR GODS
Tug Of Mind is actually an iPhone app, a simple game where you stare at a realistically rendered face that makes different expressions at you depending on your own level of relaxation. The game also lets you create and customise the face you play against, meaning you can square off against your boss, your dad or that one sketchy neighbour you keep having darkly erotic nightmares about. Or not.
The more you relax, the faster your ‘progress’ bar fills, until you fill it completely and win. Although simple, it forces you into an odd mindset – if you think about winning, you start losing. Think of it as good practice in case you ever go against Gozer the Gozerian; whatever you do, don’t think of the Sta-Puft Marshmallow Man.
‘Gods And Mortals’, on the other hand, is slightly more complex. Deepa is the first to admit that the technology is still quite expensive, unwieldy, impractical and owned only by a select few, but to combat this, as well as encourage more widespread recognition and use of the EEG headsets, ‘Gods And Mortals’ was designed as a platform game with a cunning twist: it pits players without headsets against those who have them, turning the latter into immensely powerful gods.
While the mortals’ mission is to build towers to reach heaven and kill the gods, the gods have powers to destroy the towers. The powers, in a concept intimately familiar to most video gamers, need mana to work, but whereas in most games mana regenerates automatically over time, the god-players in ‘Gods And Mortals’ have to actually relax in order for it to regenerate.

THINGS TAKE A TURN FOR THE AWESOME 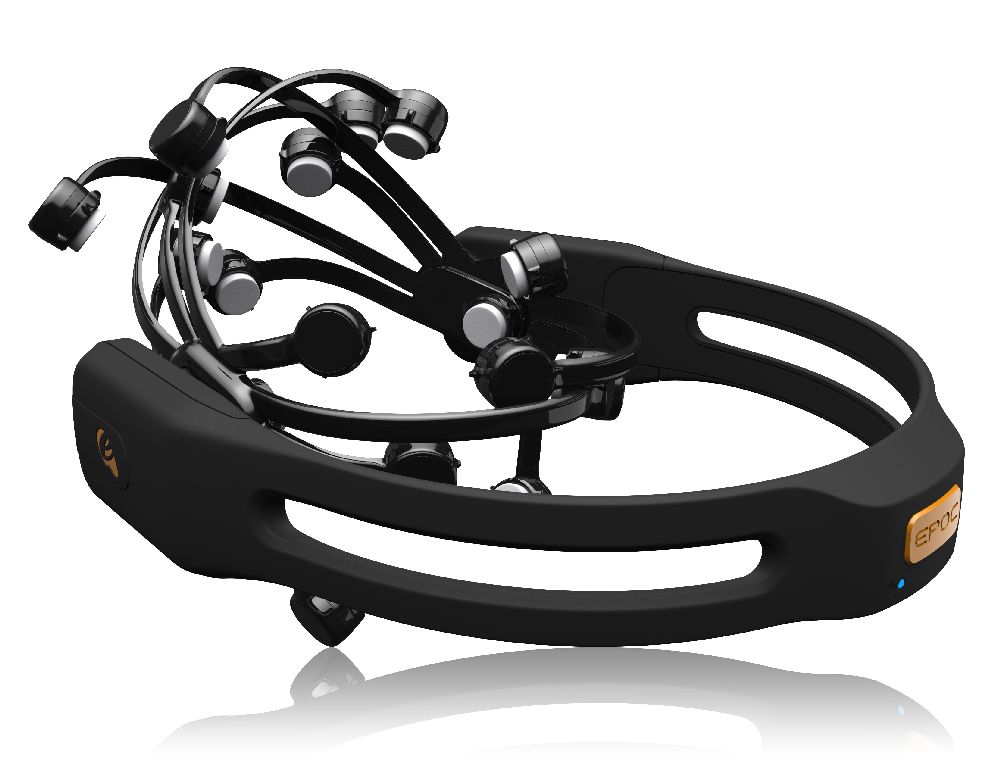 Also of note is the headset calibrator which is, on the surface, purely functional, but when I tried it I learned it actually makes for a fun little game in and of itself. Basically, you stare at a picture of a box. The calibration begins when you touch a button and the headset ‘records’ 8 seconds of you ‘thinking’ the box to float up vertically in the air. The process is then repeated until you’ve recorded several axes of movement for the box, as well as for the box fading away and disappearing, which is obviously more difficult conceptually than simple movement.
Once the headset had recorded the brain activity corresponding with the movement of the box, I simply had to stare at the box and think it to move in a certain direction, and holy shit it actually worked.
While pushing the box back and forth was simple enough, levitation, or moving the box along the up-down axis proved harder. Imagining Master Yoda on my shoulders, I simply closed my eyes and pictured the box floating, and sure enough, it did. Go back and read that sentence again and try to convince me it’s not awesome. I’m in the phonebook.
What this all boils down to is that someone, somewhere, has to be working on a Star Wars video game where you can actually use The Force. There just has to be. And if there isn’t, there damn well should be.